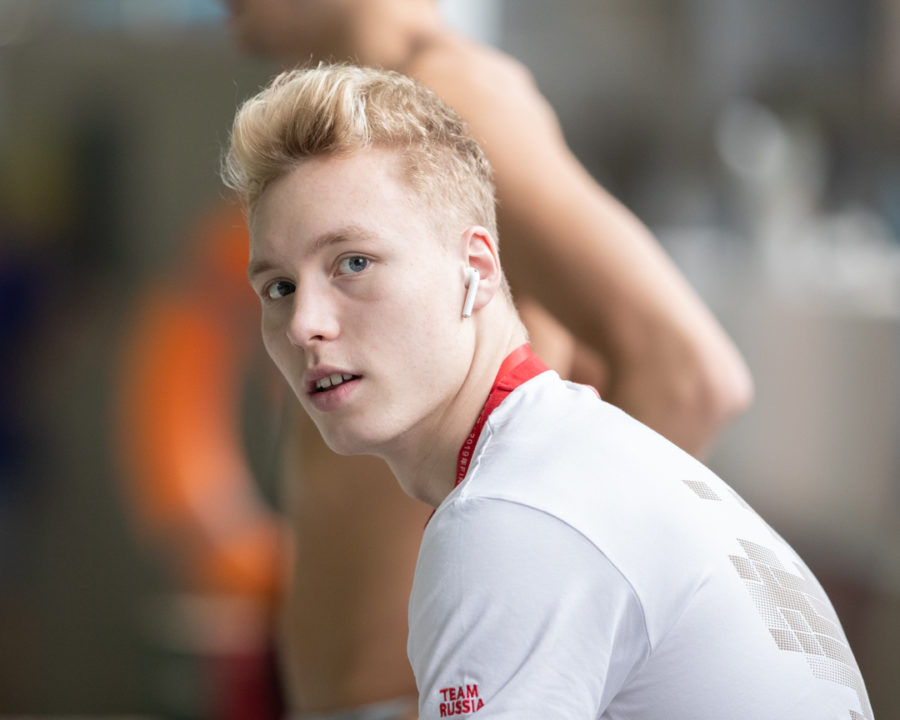 Minakov (above) won silver at the World Championships in the 100 fly; he's facing a headline battle with American Luca Urlando in Budapest in 2 weeks. Archive photo via “Rafael/Domeyko Photography”

Russia has announced a 30-athlete roster for the 2019 FINA World Junior Swimming Championships, which will be held from August 20th-25th in Budapest, Hungary. As has been their modus operandus all summer, the Russians have pulled no punches, sending big-name swimmers to multiple championships throughout the summer, in contrast to choices by other big swimming nations like Australia and the United States to limit their athletes’ international schedule.

The headliner of this roster is 17-year old, American-trained Andrei Minakov. Minakov, who last year won 6 gold and 1 silver medal at last year’s Youth Olympics, has had international success at both the senior and junior level this summer. That began at the European Junior Championships with 4 gold, 1 silver, and 1 bronze medal, including an individual title in the 100 fly (51.66). 3 weeks later, he won individual silver at the senior edition of the World Championships, swimming a 50.83 Russian Record to finish 2nd to only American swimmer Caeleb Dressel. That was part of a 2 silver, 1 bronze medal meet overall for him.

Now he enters the World Junior Championships as a favorite, where we expect to see at least one headline matchup, in the 100 fly, between him and another California resident: American Luca Urlando.

The roster will include most of the country’s medalists from those European Junior Championships, including boys’ 800 and 1500 winners Ilia Sibirtsev and Kirill Martynychev; and the pair of Vladislav Gerasimenko and Aleksandr Zhigalov, who swept the boys’ breaststrokes.

The Russian women will take a loaded team as well, headlined by Russia’s youngest active National Champion Evgenia Chikunova, who won the National Championship at only 14-years old in April, and lowered her Russian Junior Record to 2:21.0 at the European Junior Championships. She’s joined by fellow Euro Junior medal-winning breaststroker Anastasia Makarova.

Daria Vaskina, who won the 50 and 100 back (including the former in a Championship Record) at Euro Juniors and took a bronze medal in the 50 back at the World Championships will race her 3rd taper meet of the summer.

At the 2017 World Junior Championships, Russia won 14 medals: 3 gold, 3 silver, and 8 bronze. That ranked them 5th by both total medals, and by “gold-silver-bronze” sorting. The USA, which hosted the meet, led all nations with 30 medals, including 11 golds.

Anyone know when the official psyche sheet will be released?

Not until Monday afternoon Budapest time I think.

The article says “American trained” but where does he train?

Let me google that for you: https://www.collegeswimming.com/swimmer/418838/

I actually did but the first few articles were all swim swam and no mention. The article here didn’t mention he trained at Concord either. But thanks, now I know

Terrapins in Concord. Would be cool to see him join Sancov at USC

He doesn’t train at Terrapins anymore, I’m pretty sure he went back to Russia after last summer.

It’s only been a year, relax

Chikunova might (Probably will) swim faster than Worlds Winner… might even breake 2:20 which no one broken recently

Might, because she’s a huge talent, but not an easy task improving her PB under the winning 2.20.17 from Efimova at Worlds, also considering that Chikunova has already swum at Eurojuniors and Eyof ( what a beauty that 100 free with Popovici vs Whittle !)

Is he still college eligible/looking for schools? I remember him saying in a video he was wanting to attend school in America.