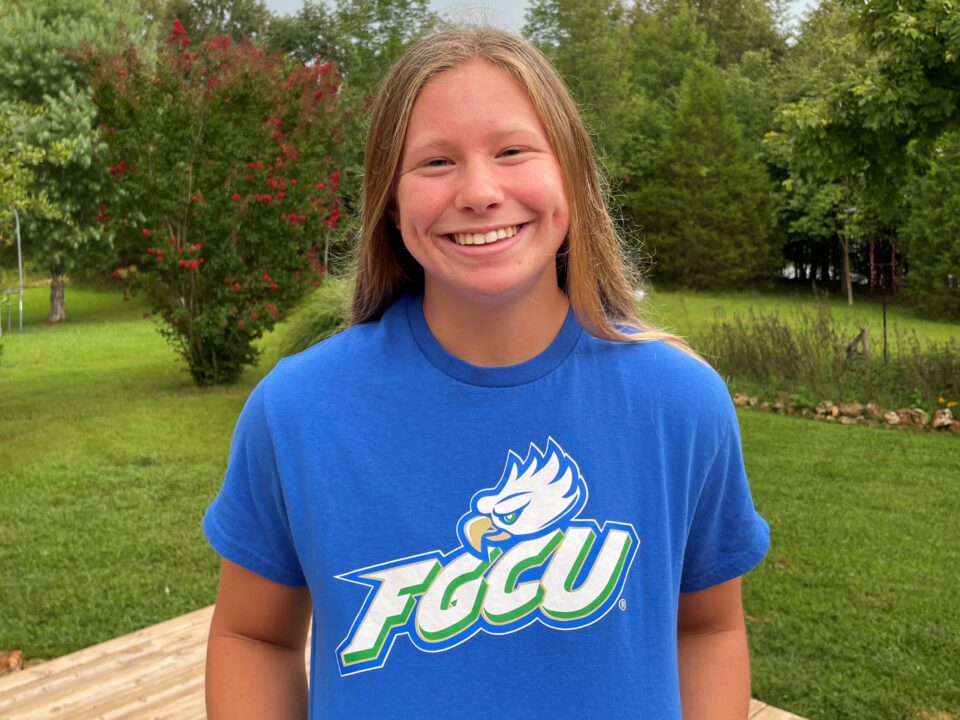 One of the top swimmers in the state of Kentucky last year, Sarah Zoellner has announced her decision for the fall of 2023, committing to swim at Florida Gulf Coast University. Zoellner is starting her senior year at Greenwood High School this fall and trains with RACE Aquatics.

“I am thrilled to announce my verbal commitment to continue my academic and athletic careers at Florida Gulf Coast University! Thank you to my parents, teammates, and coaches for helping me get to where I am today. I also want to thank Coach Dave for this amazing opportunity! I can’t wait to be apart of this team! Wings up and Go Eagles!!! 🦅🤙”

As a high school junior, Zoellner was a top-3 finisher in the 100 fly at the 2022  KHSAA Swimming and Diving State Championships in February. She finished third behind a pair of seniors, touching in 55.60. She also swam to a lifetime best in the 200 IM at the meet, dipping below 2:07.00 for the first time. She ultimately took 5th in 2:06.26.

Over the summer, Zoellner closed out her long course season by competing at the Futures Championships in Cary, North Carolina. There, she posted a lifetime best in the 200 IM, stopping the clock at 2:31.27 during prelims. She also qualified for finals in the 200 fly, taking 13th in the 200 fly in a time of 2:19.99.

Zoellner will be a big addition to the Eagles fly and IM groups, with a time in the 200 fly that would have led the program last season. Her time of 2:00.40 would have also won the event by over a second at the 2022 CCSA Swimming and Diving Championships. FGCU only had one athlete in that final, Michaela Sizemore, who took 9th. Zoellner would have also qualified for the A-final of both the 100 fly and 200 IM with her lifetime bests.

Last season the Eagles finished in second at the CCSA Swimming and Diving Championships, less than 300 points behind champions Liberty. The team featured two athletes recognized as Swimmer of the Meet, with seniors Wiktoria Czarnecka and Petra Halmai sharing the recognition. The school has now produced athletes that won that award in eleven out of the past fifteen seasons.

FGCU has another big addition to the team’s butterfly group joining the program this fall, with Cameron Kuriger having committed to the team’s class of 2026. A native of Columbus, Ohio, Kuriger will be joining the Eagles already having been 54.14/1:59.23 in the butterfly events. That time in the 200 fly would be fastest enough to rank within the program’s top-5 all time. Her lifetime best in the 200 equals the 2022-23 B-standard in the event, while shes less than half a second off of the B-standard in the 100.