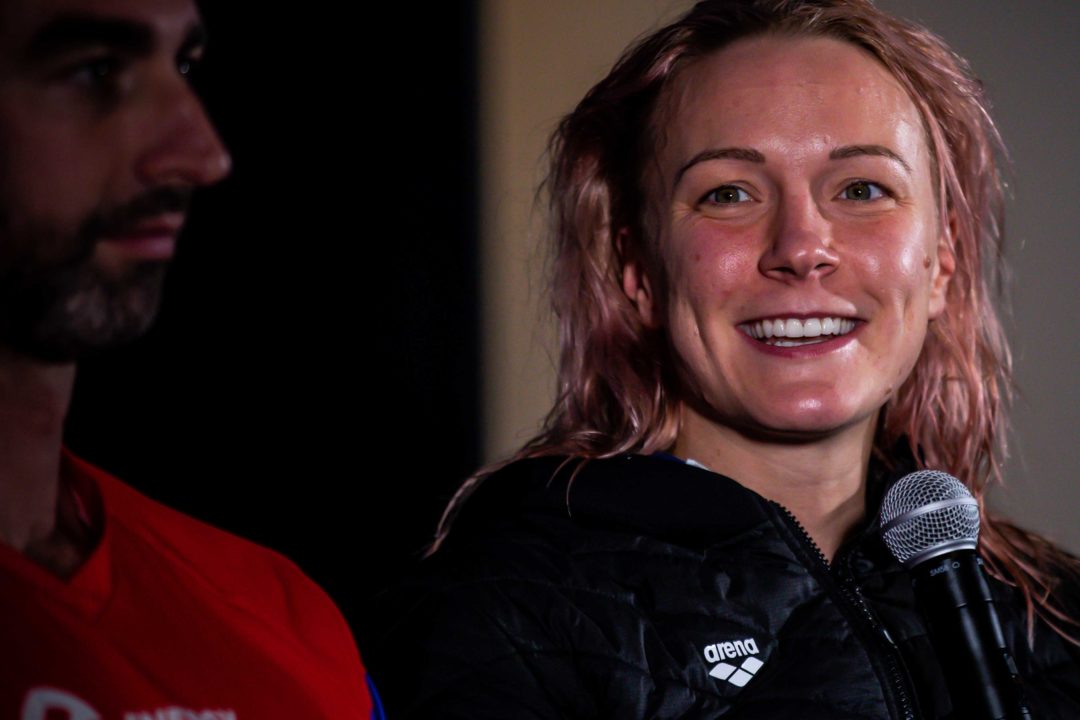 Sarah Sjostrom, captain of Energy Standard and the season MVP, topped the total prize money lists at the end of the ISL season with $137,700. Current photo via Jack Spitser/Spitser Photography

*12/23 update: According to ISL rules, there is a $1k bonus awarded to each swimmer per regular season match for Vegas qualifiers only. Therefore, some data has been corrected by $1k-$2k. All math below is now updated.

At the end of the ISL grand final in Las Vegas, it was Energy Standard’s Sarah Sjostrom who finished on top of the prize money lists with the completion of the inaugural International Swimming League season. Sjostrom finished the season with $139,700 earnings, $41,000 ahead of runner-up Caeleb Dressel ($97,700). Only 9 swimmers earned over $40k, making Sjostrom’s earnings even more spectacular.

However, at the finale, it was Vegas MVP Dressel who topped the meet earnings with $45,500, which is right under $10k more than season MVP Sjostrom. Just like Sjostrom’s season earnings, only 19 swimmers earned more than Dressel’s gap between him and Sjostrom, showing just how dominant both Dressel and Sjostrom were in the first-ever ISL season.

Totaling up all prize money earnings at the end of the season, the International Swimming League awarded $2,580,400 to the 256 athletes across the 3-month season, which is notably $166,400 more than the total prize money handed out to swimmers at the 2-week-long 2019 LC World Championships.

A few caveats: the World Championships total doesn’t include World Record bonuses. There were also significant sums being paid out to ‘ambassadors’ in the ISL – we don’t know exactly how much was being paid in total appearance fees, but Federica Pellegrini was paid around $40,000. In a comparison, this can be offset by the fact that athletes earn national Olympic committee or federation bonuses for their results at the long course World Championships – for example, every gold medal at the World Championships this year for American swimmers netted them an additional $7,500 through Operation Gold.

Excluding the top 3 values (to make the data more fair with Dressel/Sjostrom’s earnings), there was only a minimal difference among the average earnings in the top 15%, which is roughly the top 30-40 athletes. Since the ISL season was 3 months long, in contrast to LC Worlds’ 2-week bout, it shows that the ISL is a much bigger commitment for less money (if you’re counting money made by meet, not total).

Was there a WR bonus at ISL for Seto, Dressel and Atherton?

Why didn’t they deduct points from Manaudou and Campbell for missing the standard time in round 3 of the skins? I think the competition would be more exciting if you had to hit at least the minimum time in R3 to get the points.

Also they need to add 800 Free so that distance swimmers get a chance to earn some of this cash.

I don’t think there should be deductions for swimming too slow in skins R2 and R3. They do have negative points if you DQ in those rounds though. If you think about it, it’s technically not just a 50 so they shouldn’t be held to 50 time standards.
I do think there should be an incentive to swim as fast possible though. Right now, I think it just speaks to Campbell’s Manaudou’s mentality: “Oh I lost already so why even try”. You know who also had that mentality? Katinka Hosszu in 2012 after she saw Ye Shiwen take off in the 400IM-“Why try for bronze (even though I don’t even have any medals at all)”.
Adrian kept fighting… Read more »

Yeah, I was just thinking the taxes for these folks must be crazy. Pretty sure that in the US you have to also pay the state taxes of the state the competition was in? I hope they have good accountants!

Such a bummer. I’m sure they can find some creative ways around Uncle Sam.

Not sure about the other locations, but Nevada doesn’t have a state income tax. (They have a state sales tax instead.)

So… to make it in swimming these days, be a sprinter?

he sprints that 400im tho lol

Short course prowess. 2IM/4IMers with good walls seem to have the best chance across all these meet formats. Minus the skins, of course, although Dressel is a good 2IMer.

I understand the idea of shortening the meets without distance, but it kind of gives athletes like Ledecky the short end of the stick. It’s better value for someone like her to swim the World Cup where she could score WR bonuses in her best events

How do people that compete make $0?

Only the top 4 finishers in each race get paid.

There will be a salary, usually, but not always, in addition to this reward money.

will there be any movement into gambling on ISL events? that’d be sweet