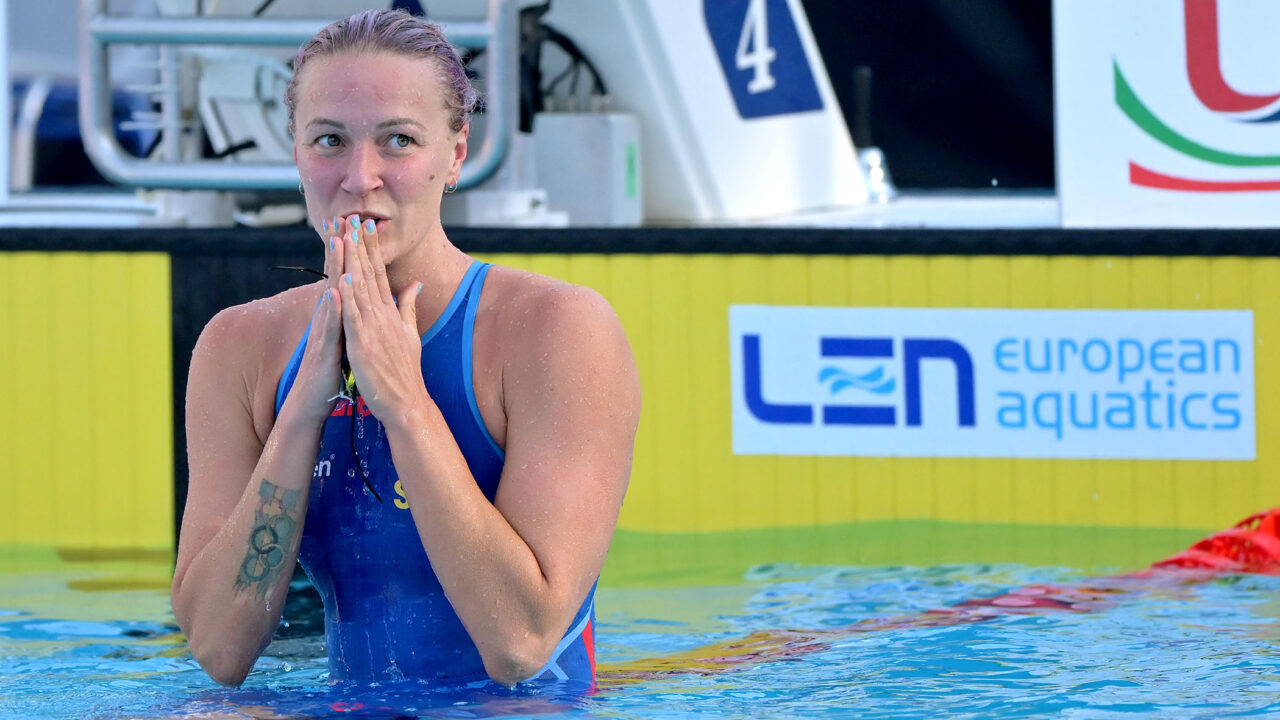 Sjostrom’s absence will be felt as the 29-year-old world record holder was the overall winner of the World Cup Series in 2018 and 2019. Her 63 career World Cup victories rank fifth all-time among female swimmers. At last year’s Short Course World Championships in Abu Dhabi, she brought home seven medals — three gold, three silver, and a bronze — marking her first hardware from a major international short course meet. Sjostrom had opted out of the Short Course World Championships in both 2016 and 2018.

“I need an autumn with some peace and quiet before the World Championships and the Olympics,” the four-time Olympian told Swedish media.

On top of that, Sjostrom also finished last year’s ISL season as the season MVP, Finals MVP, and top overall earner. Still, she showed no signs of slowing down this summer, winning gold medals in the 50 freestyle and 50 butterfly at this year’s World and European Championships. In total, she hauled in eight medals this year — three at Worlds (two golds and a silver) and five at Euros (three golds, a silver, and a bronze). In the process, she became the most decorated female swimmer ever at Worlds (only Michael Phelps has won more) and the most decorated swimmer — man or woman — at Euros.

Now it’s time for Sjostrom to enjoy a well-deserved break.

“I’ve done more championships in this time than I usually do in three years,” Sjostrom said. “Then there is the World Championships in long course next summer and the Olympics after that so I have decided that I will take this autumn and just rest a bit.”

Sjostrom said her training is more exhausting than the competitions themselves, both physically and mentally. She’s hoping that taking the rest of the year off will keep her feeling fresh in the future, even beyond Paris 2024. Sjostrom recently set a goal of swimming at the 2028 Olympics in Los Angeles. Only four swimmers in history have competed at six different Olympics.

“Actually, the competitions themselves are not a problem, but it is to constantly expose yourself to the training you need to do and have a plan for your training for a very long time,” Sjostrom said. “It takes a lot out of you.

“I know that’s what I’m going to have to do if I’m going to be able to swim as fast as I want to when it comes to the World Championships and the Olympics,” she added. “I need to have the energy and feel ready to go.”

Sjostrom’s continued success makes it easy to forget that her career was jeopardized by a broken elbow just about 18 months ago. But she proved she’s still in her prime by battling back to claim an Olympic silver medal in the 50 free just a few months later.

“It’s been crazy,” she said. “It’s been a challenge to first recover from injury and get to the Olympics and then compete intensely last autumn and this summer. But it’s been a lot of fun. It’s really gone better than expected.”

Sjostrom believes her best times are still ahead of her in the 50 free.

“I still have a bit to give and I can probably swim faster than I have done before, especially in the 50-meter freestyle,” she said.

Right now, Sjostrom doesn’t have a training schedule. She doesn’t know when her next competition will be, but she expects to enter the Stockholm Open next April.

“I don’t have a training schedule,” Sjostrom said. “I train when I feel like it and don’t push my body when it doesn’t feel good. Maybe I’ll show up at the World Championships (in November) as well.

“I don’t know when the next competition will be, maybe something smaller in February,” she added. “Then there’s the Swim Open (Stockholm in April). So I’m pretty relaxed now until April.”

Sjostrom is set to make her return to major international competition next July at the 2023 World Championships in Fukuoka, Japan.

It’s insane to think that she competed back at the 2008 Olympics. Because of her consistency in the 50 free, she could probably become a 6-time Olympian if she wants to.

Such a better way to handle a break from swimming than CD just up and leaving worlds. Class act here

I agree. Leaving abruptly like that wasn’t a good look… sure he doesn’t care much about what fans think since he just left without explanation.

Well deserved for a GOAT

I hope she has a successful 2024 Olympics. She is far too talented to end her career with only one individual Olympic gold. I agree her best chance is in the 50FS.

I agree. Despite being the world record holder, I suspect the 100 fly is solidly out of reach. Her best time in the last five years is a 56.18 from Tokyo. Given how women’s 100 fly seems to be super competitive at the moment, I don’t see this happening.

The 100 free is a possibility although quite unlikely. Sjostrom does have the third best time this year, but with McKeon and Campbell back in the mix, as well as MOC and Jack hitting huge PBs this year, and of course the unknown Haughey factor, it just seems like there might be too much of a crowd at the top.

The 50 free is definitely her best shot. She won a… Read more »

Next year it’s gonna be interesting to see if Manuel can return to being a contender.

Doesn’t she have OTS?

I have seen people physically recover from OTS (not always on the motivational side though) but they were X-country skiers and it took about 2 ‘lost’ seasons.

I know it is a long shot with the solid top three but the medley relay in Tokyo was quite good. Similar story in the 400 free relay

Are you talking about a medal or a gold medal? A relay medal is a distant possibility I suppose, but a gold medal is absolutely out of the question.

I like how when discussing her future plans, she completely ignores 2024 Doha Worlds lol.

Sweden might not be able to qualify relays for Paris without her.

Does it matter? Sweden won’t be a medal chance for any relays. For Sjostrom personally it’s probably better if Sweden doesn’t qualify relays because it means she won’t have to expend energy for them.

His comment was about the Paris Olympics. When was the last time Sweden won a relay medal at an Olympics? Bronze in Sydney I think? Very different from Euros or Short Course Worlds.

The reality has been that 2 Swedish women’s relays (4X100/4XMED) have been able to comfortably qualify for finals at World/Olympic level but each have been “one leg short” of breaking the USA/AUS/CAN hold on those 2 podiums.

If she is, indeed, continuing post Paris through to 2028; I think this call WILL come into play unless another really top line freestyler as well as backstroker emerge out of SWE. Going into Paris, I’m not sure. Is it confirmed whether Coleman has retired or not ?. The 2 Hansson’s are certainly international class BRS/fly.

Coleman is entered in the Berlin World Cup meet.

Coleman is coming back and entered in the World Cup. A Hansson/Hansson/Sjostrom/Coleman 400 MR/400 FR is absolutely a medal contender.

Hhmm, wish I could go with you on those calls but whilst that line-up would comfortably final in both relays; both have one significantly weak link.

4X100: Coleman is certainly a very strong and reliable 53 splitter, even a sub53 on a very good day and Lisa Hansson is a 53mid. However, Sophie is only a 54high and Junevik not even that.

4XMED: Whilst Coleman CAN break the minute in 100back, they’re still most likely haemorraging at least a second to “the big 3”. Also where do you swim Sarah ? Put her on fly and she could conceivably bring them back to potential medal calculations but then you’re swimming your 3rd best 100freestyler on anchor and solid as she… Read more »

Sarah went a 59 long time ago in the 100 back at a nothingburger meet, unrested. In a big meet relay situation, I bet she could go 58 something. That would make their lineups pretty intriguing. L. Hansson can swim back or fly, Michelle can swim back or free, and Sarah can swim free, fly, or back. I’d like to see Sarah give another crack at the 100 back before Paris.

Even if Sarah DID pop this 58 that you hope for, it would only at very best put them somewhere close to parity with the Big 3 ……. and there’s their relay “ace card” used up on what is a non-preferred stroke.

Likewise with using Louisa on backstroke; at best its line-ball between her and Coleman on best times so no major advantage and that would mean having to use Sarah on fly and Coleman on anchor.

In all honesty; Coleman – S.Hansson – L.Hansson – Sjostrom remains their best bet. A few years ago, Sarah on fly would be their best card but she’s most likely come back to the field on fly and there’s little to pick… Read more »

Back in the spring (somewhere around March), M. Coleman stated that she was taking a break and would return to practice during the summer and start racing again in the fall (as Troyy and Aquajosh stated with regard to the World Cup).