Sarah Sjöström: Over A Decade of Medals and World Records (Videos) 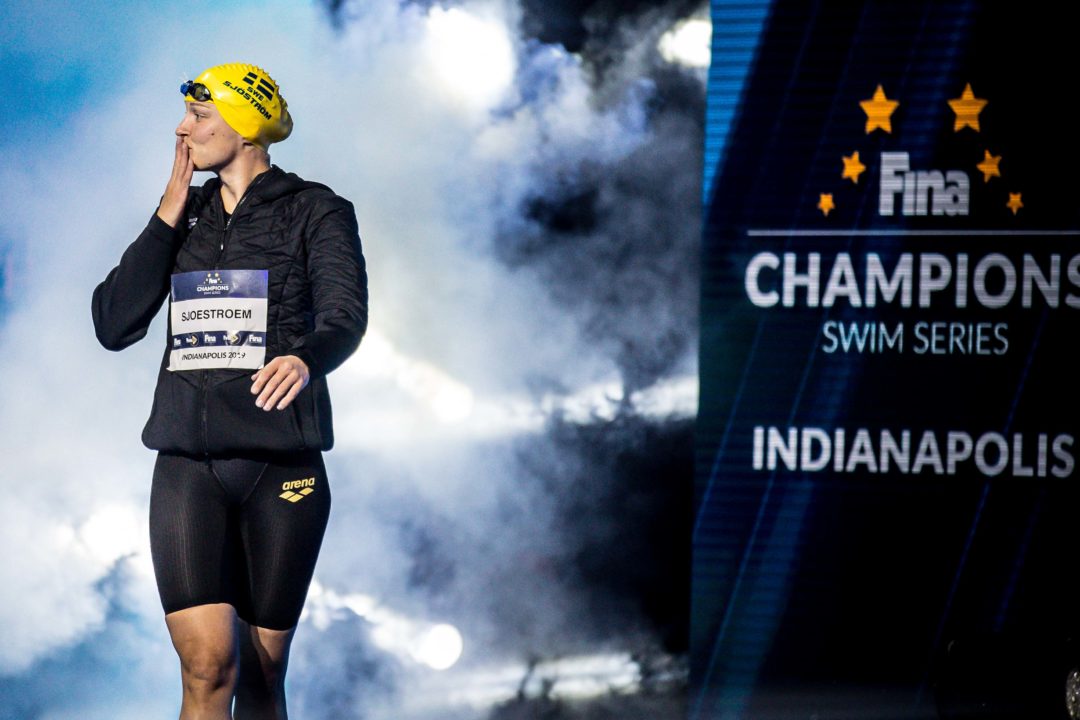 Sarah Sjöström set a world record at just 15, but her next few years were left in this shadow, only for her career to explode into elite status. Archive photo via Jack Spitser/Spitser Photography

Swimming history has comprised of many athletes participating in world-class competitions starting from an early age. The United States for example has produced swimmers such as Michael Phelps and Katie Ledecky, both boasting world records at just 15 and 16 years old. Sarah Sjöström, another name that tops this elite list, was just 15 years old when she first broke the 100 m butterfly world record.

At the 2009 FINA World Championships in Rome, there were obviously plenty of world records, as a result of the introduction of the best suits of the “supersuit” era, which are now outlawed. However, Sjöström’s as a promising teenager’s performance may be overlooked by the pure overall times that were being swum at this meet.

Coming off of her gold medal at the 2008 European Championships, Sjöström joined the ranks by first breaking the championship and Swedish record in the heats. Then in the semifinals, she broke the world record formerly held by Inge de Bruijn of the Netherlands by over two-tenths in a time of 56.44. In the finals, she closed on Australia’s Jessicah Shipper to win gold and set a new world record with a 56.06. At just 15 years old, Sjöström managed to lower the world record by over a half-second in one meet.

For a swimmer who swims so fast at such a young age, the projections into the future are limitless. But it wasn’t immediately clear that Sjostrom would fulfill those expectations.

During the next World Championships in 2011, Sjöström was primed to defend her title and becoming world champion again at 17. However, in Shanghai things did not go as planned. Sjöström was left off the podium finishing fourth, while the American Dana Vollmer won and set a new American record.

In 2012 at the London Olympics, the same fourth-place finish left Sjöström just out of reach of her first Olympic medal in her second Games appearance (she didn’t make it out of the heats in 2008).

Vollmer not only came away with the gold but became the first woman under 56 seconds in the 100 m butterfly in a time of 55.98.

With these two performances from 2011-2012 not meeting expectations, Sjöström was ready to make a tremendous comeback.

The Swedish star began working on her freestyle to already add to her stellar butterfly. After a multiple medal performance in the European SC Championships, Sjöström bounced back in Barcelona at the 2013 World Championships.

In Barcelona, she reclaimed gold in the 100 butterfly and a silver in the 100 freestyle.

The following year at the 2014 Swedish Nationals, she destroyed the 50-meter butterfly World Record with a time of 24.43, breaking the old record by over a half-second.

The one thing that was still missing from her list of accomplishments was her long course world record in the 100 butterfly. At the 2015 World Championships in Kazan she was ready to claim just that. In the semi-finals, Sjöström unleashed a blistering 55.74 to touch as the fastest woman in history.

Sjöström was not done winning gold nor breaking world records at this point. Later at this meet she went on to win the gold in the 100 butterfly and setting a new time of 55.64. She would also win gold in the 50 butterfly.

At the 2016 Rio Olympics she lowered her world record once again (55.48) to capture her first Olympic gold at the age of 22. She managed to pick up a bronze and silver in the 100/200 freestyle respectively.

In 2019 (Gwangju), even though she was bested in the 100 fly by Canadian Maggie MacNeil she still managed to get on the podium in all five of her individual events.

Sarah Sjöström is dominant to say the least. At still only 26 years of age, she has spent the last decade putting up impressive swims from either short course to long course, freestyle to butterfly. She has racked up the wins and earnings in the FINA World Cup circuits. Even in the newly minted International Swimming League, she was named the inaugural league MVP swimming for the championship winning team Energy Standard.

When swimming resumes and international meets take place, do not be surprised if Sjöström adds more accomplishments in the next decade.

Sarah Sjöström has impressed us during a long time but sadly I think she has had her peak and that the new generation will overtake her.

It was scary when she needed the oxygen mask on deck at Gwangju after losing the 200 Free. At some point, an inhaler and a prayer will only take a swimmer so far.

I think if she’s moves away from Energy Standard she could get back to her best. But with Energy Standard I think her times continue to decline because the Energy Standard swimmers set some excellent times at 2018 Europeans and haven’t really backed them up. Look at Ben Proud who went from a textile WR in the 50 free at the time to being nowhere near challenging Dressel in Gwangju even though he could have with his 2018 time. Then there’s Georgia Davies and Kliment Kolesnikov who set 50 backstroke European and World records, respectively in 2018 and then were nowhere near that in 2019.

Sarah turns 27 years old on 17 August 2020. Sarah would not be classified as a “spring chicken” anymore.

Legend.
PS : does anyone think one of her WRs could be under threat ?

So … put another Campbell on the barbie and watch ’em get cooked in the final.

Have always been curious as to when Sjostrom started using an inhaler, seems to have provided a huge career boost. Was it after 2012 Olympics? I was surprised by how badly she struggled with the 100 Fly in London.

Yes, it’s kind of crazy. For a while in her career, she was struggling to get across the pool. Then, all of a sudden she is swimming 50 Fly with no breaths.

Until watching on Olympic Channel last night I had forgotten how sluggish Sjostrom looked in London. Very strange. Not attacking the start or the walls and her distance per stroke not close to how she looks at peak. Actually the most interesting aspect of those replays is watching the future stars who were not faring particularly well at the time, like Sjostrom, Hosszu and Efimova. Hosszu faded in the 400 IM then basically gave up in the 200 IM. Only a young Efimova looked similar to her current self, even if Dan Hicks had no idea who she was as Efimova was the only one keeping up with Rebecca Soni during the 400 medley relay second leg.

Rebecca Soni was faster in the women’s 100m breaststroke at the 2011 FINA World Swimming Championships than the 2012 Summer Olympics.

is she the caeleb dressel of women?

She holds six individual worlds records over 50, 100 and 200 metre distances. Both are sublime swimmers, absolute superstars, but lets get it right – Caeleb Dressel is the Sarah Sjostrom of men, not the other way round.

I know she hasn’t been at her best the last two years but I really think with some rest now during corona times that she will come back the strongest she has ever been! I’m expecting some serious speed in tokyo, otherwise I will be somewhat disappointed.