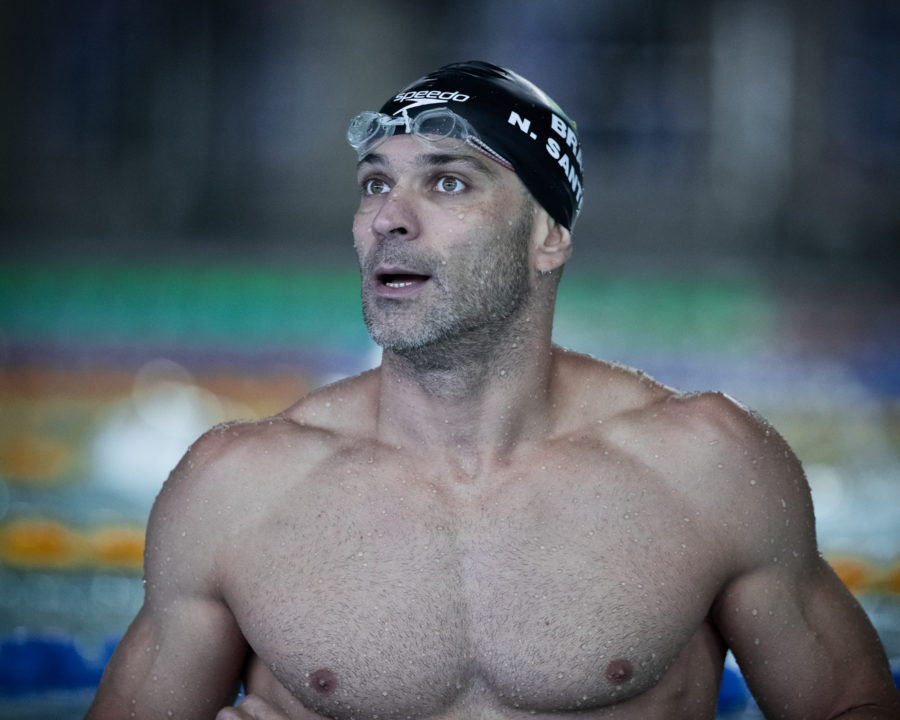 Nicholas Santos delivered a 30 point jackpot swim today in the 50 fly, proving how key his contribution is in this event. Archive photo via “Rafael/Domeyko Photography”

On Day 2 of ISL Match 9, Energy Standard, Tokyo, Iron, and Toronto battled it out in their last meet before moving on to the semi-finals. All four teams will move on to the next round of the season, with their final rankings and seeds depending on the outcome of Match 10 occurring later this morning.

As Energy Standard managed to hold their lead through the second day of racing and come out victorious, Iron made a push to overcome Tokyo for second. Despite a considerable effort in a few key events, Iron was unable to catch up, leaving them in third overall to Energy and Tokyo. Toronto trailed the standings, ending in fourth place.

With Match 9 over with, we clued up a few key storylines that came out of day 2 of the meet;

Tokyo has been really strong in a few key events that have allowed them to pick up 2 third-place and 2 second-place finishes this season. Among those key day 2 events are three races in which Tokyo has gone undefeated thus far in the season; the women’s 200 fly, women’s 400 IM, and men’s 400 IM.

Suzuka Hasegawa and Shimizu Sakiko have swum the 200 fly together three times not and have gone 1-2 at Match 3, Match 5, and now Match 9. Their combined streak interrupted by Cali’s Hali Flickinger and New York’s Svetlana Chimorova who were 2nd and 3rd at Match 8. Despite the near-perfect 1-2 streak, Hasegawa has maintained her own perfect record of winning the event at all 4 meets she’s raced it in so far. She’s looking good to continue the streak at least through semi-finals as only Flickinger has been within reach of her time this season.

In the men’s 400 IM, Kosuke Hagino raced to his fourth straight victory today match Hasegawa’s perfect streak in his debut ISL season. He has ranked in top-level points every time he has swum the race for the Frog Kings and leads the season ranking so far with his 4:01.41 from Match 8.

The third perfect Day 2 record for the Frog Kings come from IM star Yui Ohashi. Ohashi has picked up wins in both the 200 and 400 but has remained undefeated so far in the 400. Ohashi’s fastest time in the race this season comes from Match 8 where she won the race in a 4:25.53. With her biggest competitor in the event; Melanie Margalis out for the season, she is looking good to continue the streak season-long.

It’s no secret that Emre Sakci has been the best 50 breaststroker in the league this season, coming within 0.04 seconds of the World Record at Match 7. He has recently stepped up, however, in the 100 breaststroke, thus expanded the breadth of his contributions to Team Iron.

He won the 100 breast at Match 4 against a relatively weak field compared to other races this season. It took a 57.17 for him to win it the event which remains the slowest winning time in the event this season. Moving on from there, however, Sakci has proven that he can race the Peaty’s and the Shymanoviches of the league by putting up two sub-56 swims at Match 7 and Match 9.

At Match 7, he was second in the event with a 55.97 to Energy Standard’s Shymanovich who swam a 55.85. This morning, Sakci improved upon his time, swimming to a 55.74 victory in the event. Not only did Sakci surpass Shymanovich as league-leader in the event, but he also broke the European record. Sakci and Shymanovich now sit as #1 and #2 in the league this season as the only sub-56 swimmers in the event;

Iron has some pretty strong sprinters in every stroke and Emre Sakci has certainly been the much-discussed 50 swimmer from the team. Nicholas Santos, however, delivered a 30 point jackpot swim today in the 50 fly, once again proving how key his contribution is in this event. He, Szebasztian Szabo, and Marco Orsi have raced the event for Iron across their first 4 meets but Santos has been the clear frontrunner in terms of points;

Each event has 37 points up for grabs, meaning that across 4 50 butterflies, the have been a total of 148 points able to be won. In total, Nicholas Santos has singlehandedly won 76 of those 148 available points. That means that even though he only made up a 12.5% (1/8) share of the swimmers in the event, he accounted for 51% (76/148) of the total points scored in it. That kind of dominance cannot be overstated and it has already played a key part in Iron’s tendency to make up significant ground towards the end of day 2 of their meets.

With only one session left in the regular season, be sure to follow along with SwimSwam’s live recap and analysis of ISL Match 10 Day 2 beginning this morning at 10 ET.

he swam for Iron last year though