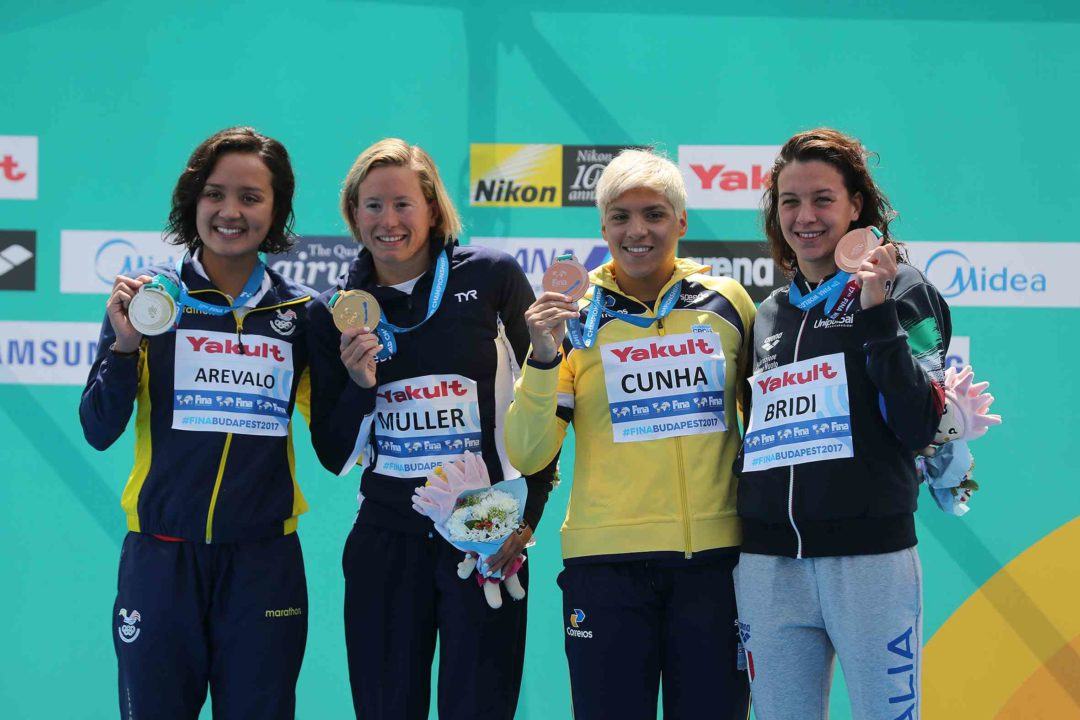 Arevalo’s success is not totally out of nowhere. She won pool and open water medals at the 2014 South American Games and a bronze medal in open water at the last edition of the Pan American Games. But the big turning point came for her in January of this year, when she left Ecuador to train with Fabrizio Antonelli in Italy.

At the 2015 World Championships, she finished 12th in the 10km race – the premier event in open water swimming – and at the 2016 Olympics she improved to 9th.

In the pool, she holds a full 15 Ecuadorian Records in distance freestyle, breaststroke, and IM races. She’s never been able to get an edge in the pool to compete internationally though at only 5’6″ tall.

Ecuador as a nation has only two Olympic medals in its history. In 1996 in Atlanta, Jefferson Perez won gold in the men’s 20km race walk. 12 years later, in Beijing, he took silver in that same race at 34 years old.

Ecuador has had one Olympic finalist in its history in pool swimming. Jorge Delgado finished 4th in the 200 fly in Munich in 1972 at just 18 years old, and four years later took 7th in the same race.

They tried for more in 1997 when Americans Vito Vasconcellos and brothers Felipe and Roberto Delgado took advantage of dual citizenship to represent Ecuador, and while they had some success, they didn’t approach a final. Ecuador also had 5 finals swims at the World Championships in the first two editions in 1973 and 1975, but haven’t been represented in the finals of a pool event in long course or short course since.

With her medal win, Ecuador becomes the 55th country to earn a medal at the championship across all disciplines.

Antonelli is a coach with the team Gruppo Sportivo Esercito, where he coaches another open water star – Rachele Bruni. Bruno is an 8-time European Champion in open water and occupied the same silver medal position in the Olympic 10km race as Arevalo did on Sunday in Budapest.

Did Ecuador attend the Olympics of 1936?