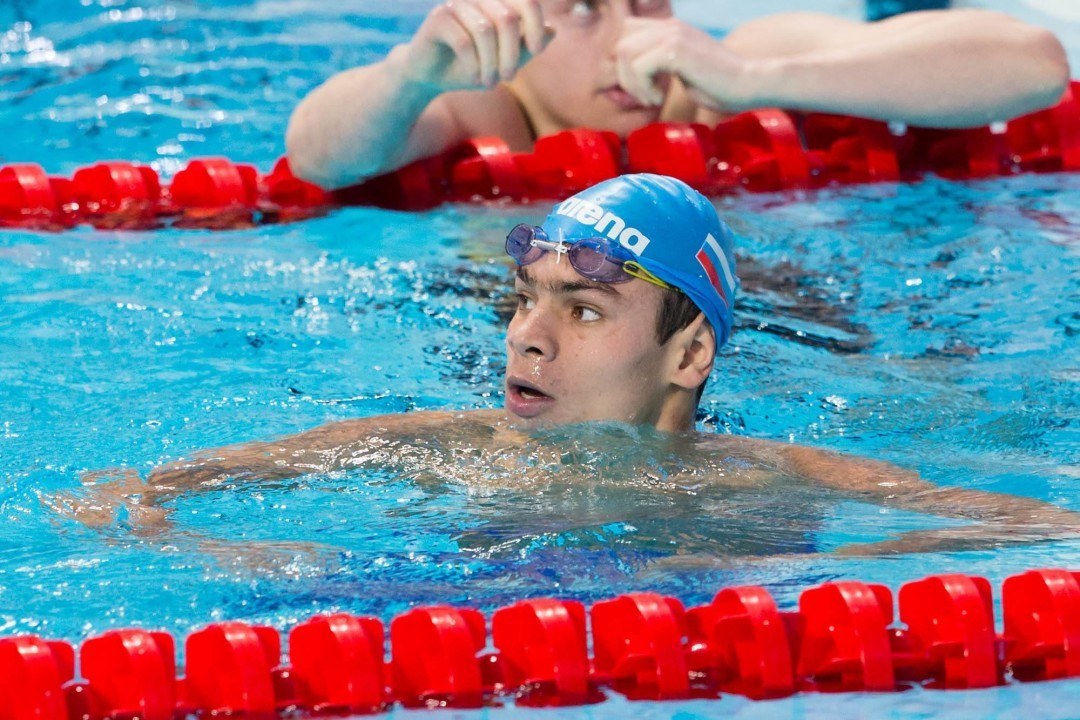 Shortly after hitting a qualifying mark in the 50 back semis, Evgeny Rylov cranked out the fastest 200 back in the world this year, winning with a 1:53.81. Archive photo via Tim Binning/TheSwimPictures.com

Rylov followed that up with a record-setting performance in the 50 back final at the end of the night. He touched in 24.52, tying Vlad Morozov‘s Russian National Record from 2014. Behind him, Grigory Tarasevich tied the Russian qualifying standard for Worlds with a 24.83 for silver.

In addition to Tarasevich and Kolesnikov, the Russians also saw Polina Egorova nab her first World Championships standard. Egorova led the 100 back semifinals, dipping under the 1:00-barrier in 59.95.

Svetlana Chimrova once again lowered the Russian National Record in the 100 fly after hitting a quailfying time for worlds and breaking the record in yesterday’s semifinals. Chimrova dropped another 3 tenths off the mark, lowering it to a 57.17 en route to gold.

Adding to their list of potential events for Worlds were Veronika Popova, Yuliya Efimova, and Anton Chupkov. Popva added the 200 free to her arsenal, dipping under the mark to win the final in 1:57.27. Breaststroke standouts Efimova (1:06.40) and Chupkov (59.86) each met the standard in the 100 breast. Efimova has now qualified for all 3 breaststroke races, and her time makes her the 2nd fastest swimmer in the world this year behind Sweden’s Jennie Johansson (1:06.30).

USA to win all the relays? Surely you’re kidding.
And Adrian to win the 100 free – did you not see McEvoy’s 100 free this week at Aussie trials?

On the mens side they are the obvious favorites. For the Women the Australians lose their advantage over the U.S without C1, and the rest are self explainitory. The mens 100 free is a very wide open event, I can see literatly anyone winning, but Adrians seems to have shifted his focus back to the 100 after focusing more on the 50 in 2015 and 2016

Yeah, and we saw Adrian go 0.2 sec slower than McEvoy in an old, slow pool at an uninspiring meet. We also saw McEvoy’s 47.0 and then not seeing him on the podium with Adrian at Rio.

Like your list.
I also expect Sjostrom to join the KL&KH club, she is just amazing.
W100BK: My bet is Seebohm with WR.
W200FL: It may be counterintuitive, but Hosszu can surprise us. She needs to keep up with KL, and cannot grab her fourth gold in 100 back, not just because of the massive competition, but the semis would put her 200IM WR at risk.

Canadian woman gonna win the 4×200 and Australia is gonna win all of the men’s sprint free.

Canadian women aren’t gonna win 4×200.
They lose both Ruck and MacLean who split 1:56low in Rio.

Rylov’s 200 back is a new European record