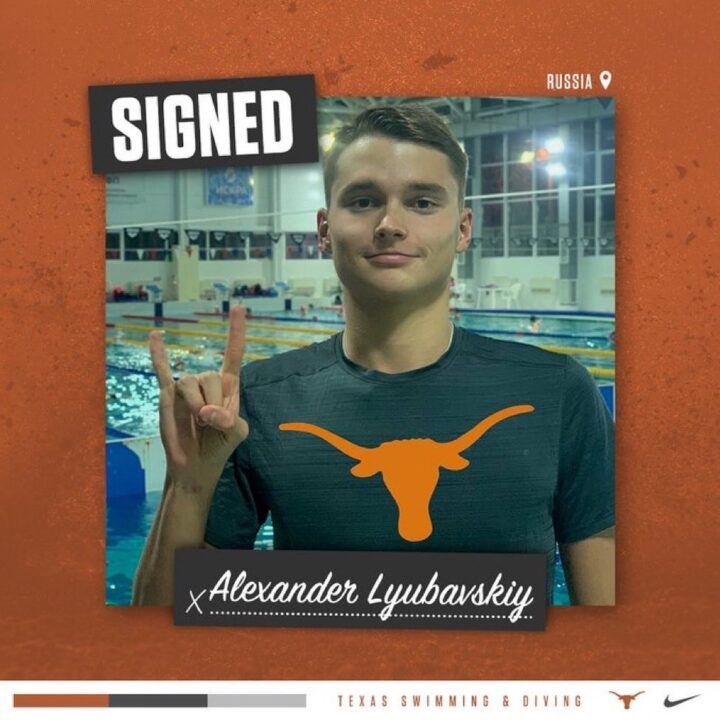 It is rare for Texas to recruit international swimmers and freshman Lyubavskiy, a Russian distance swimmer, is now the second one on the 2022-2023 team. Archive photo via Texas swim and dive

The addition of Russian junior national champion Alexander Lyubavskiy into Texas’ freshman class of 2022 makes him one of two rare international recruits on the team. The distance freestyle and open water specialist is planning to pursue a degree in business.

Lyubavskiy is from Moscow, and earned the title of Russian junior champion in the boys’ 15-16 1500 free and 800 free, alongside the 7k and 5k open water races in 2020. He competes under the Moscow Region club team which is also home to 22-year-old Russian Olympian Maksim Stupin.

Lyubavskiy is following in his older brother Mikhail Lyubavskiy‘s footsteps – he brought his swimming career to the United States in 2019 and then swam at Grand Canyon University for three seasons. This year, the elder Lyubavskiy transferred to compete at George Washington University.

Typically, it is rare to see international swimmers at Texas, but Alexander Lyubavskiy is now one of two on the Longhorns’ team alongside fellow freshman Kobe Ndebele, a South African National Team member. The history of Texas international swimmers is small but mighty – the last notable one in the past decade was Joseph Schooling who went on to win an Olympic gold medal for Singapore, but he attended high school in the United States. They also currently have senior Caspar Corbeau who represented the Netherlands at the Tokyo Olympics. He was born in California and has dual citizenship.

Lyubavskiy has Big 12 Conference final potential in two events already. His converted times would have placed him fourth in the 1650 free and in the ‘B’ final of the 500 free at last season’s championship meet. At Texas’ recent Orange & White intrasquad meet, Lyubavskiy made his short course debut and placed fourth in the 500 free (4:32.64) and 4th in the 1000 free (9:20.53).

He will be reinforcing Longhorn training groups that are largely led by upperclassmen. Texas went 1-2 in the 1650 at the 2022 Big 12 Championships, a feat led by junior David Johnston with a sub-15 minute time. Sophomore Luke Hobson touched the wall second while fifth-year Alex Zettle snagged fifth place. Texas was even more dominant in the 500 free last season, taking first through fourth place lead by junior Coby Carrozza, Hobson, and Johnston. They make for great training partners with each other since they all finished within two seconds of each other.

The Longhorn men are coming off their 26th Big 12 Conference Championship title win in 2022 under head coach Eddie Reese. They finished in second place at the 2022 NCAA Championships and have won five out of the last seven national titles.

Imri Ganiel top 100 breaststroke about a decade ago was from Israel (maybe the first?)
And last year Halvor Borgstrom from Norway

Feels like other schools have started to make in roads on the Texas monopoly on domestic recruiting.

Is there any particular reason why Texas men don’t typically recruit international swimmers?

Eddie has talked about it in interviews. He doesn’t describe it as xenophobia, more as pragmatism: he doesn’t need to, first of all (Texas gets the pick of the litter on domestic recruits), and second of all, he can stretch his 9.9 scholarships further with domestic recruits.

percentage of 9.9 stays the same. The dollar amounts just differ.

Each school has a “cost of attendance” calculation for in state, out of state, and international. Whatever category you fall into, if you receive 10% of that number, you’re a .1.

So I know what you’re thinking. “Well, it seems like then that in-state students are MORE expensive.”

But look at it from the opposite direction, and this is a Rick Paine focus, “cost of attendance.”

The math can change based on different state programs too.

Texas, for example, has a program to award in-state tuition to out-of-state students, but there are limits on the number of waivers they give out – http://www.collegeforalltexans.com/apps/financialaid/tofa2.cfm?ID=435

Other programs, like HOPE and Zell MIller Scholarships in Georgia, can be a huge motivator for good student-athletes to stay in-state. If Georgia can keep those kids in-state, they can save a lot against their 9.9 cap. If you can get a swimmer on a Zell Miller scholarship (which has no income cap), then you get them for both $0 and 0 scholarships against your cap. The NCAA passed new legislation on this topic for… Read more »

NIL could continue to evolve this too. It’s fairly common for internationals to come to the US with baggage that would have made them ineligible under the previous rules, but it was widely ignored because 1) swimming and 2) too hard for the NCAA to trace it. Now, if those internationals can just sign sponsorships out in the open, they might not need as much scholarship money. A swimmer who made no Olympic final from a lesser swimming nation might still have opportunities for endorsements in their home country, even if that wouldn’t provide a ton of marketing value in the US.

Very interesting. You guys could do a couple podcasts just on the intricacies of recruiting.

Braden- wow! Many thanks for all of the information here. I had no idea about how it all worked. I never knew that colleges had a separate international rate, I just assumed it would be considered out of state.

I think this would be a great topic for a post or podcast. This would be very beneficial for high school swimmers, parents, and club coaches to learn about.

Thank you for this! I’ve always wondered about it and have never seen an explanation.

One thing that will happen is that you could swing NIL money to in state swimmers and push most money to out of state. I know coaches try to do this now but with NIL this will be exploited even more so.

look at any distance swimmer who swims 8:10 LCM, 9:10 is very realistic

Caspar Corbeau is a current, and fairly notable Texas Longhorn that represents the Netherlands internationally. So I think there are (at least) 3 international swimmers on the roster

Caspar is an American citizen, born in California. That’s the primary difference. While he represents another country internationally, he *is* and “American.”

But yes, the few exceptions historically to Texas’ focus on recruiting Americans have been either dual citizens, or internationals who went to HS in the US (Schooling, for example).

Fair point, but the article does mention Joe Schooling as a prominent former international Longhorn. He went to HS in the US as well (like Braden points out). Also good point from Braden that Corbeau is an American citizen. I was focused more on the country he competes for.

Pretty sure Corbeau is also an American citizen who grew up in Oregon. He has dual citizenship and chooses to compete internationally for the Netherlands — so a pretty different situation than Lyubavskiy