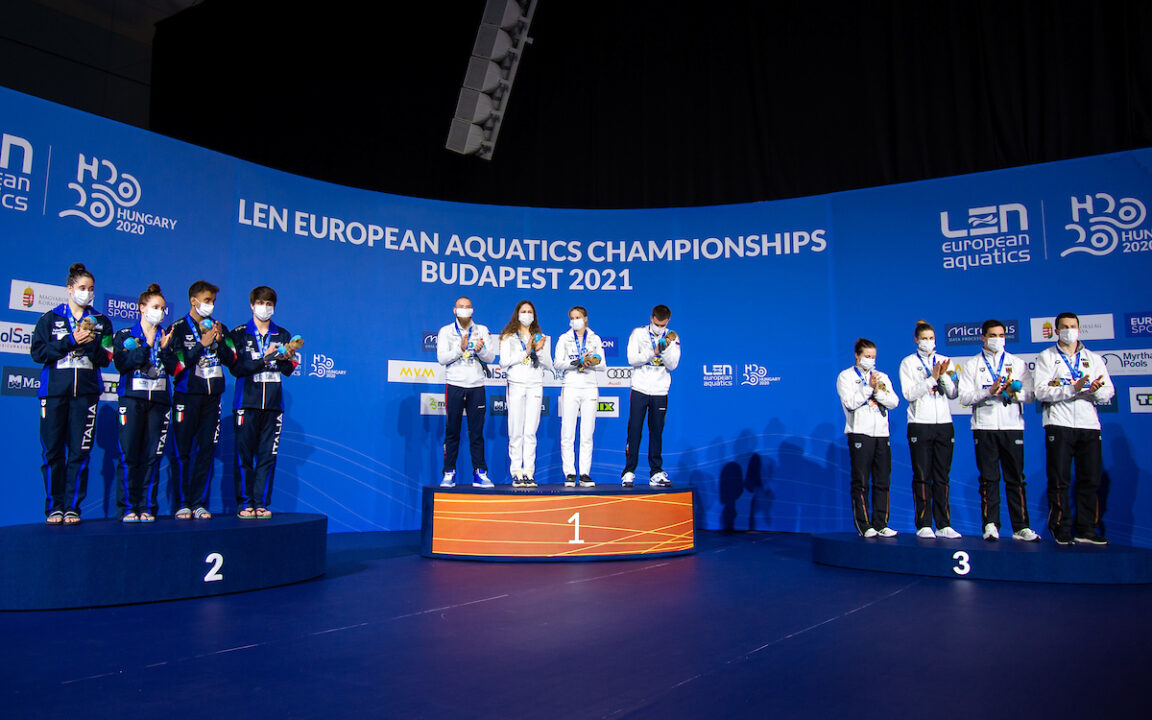 In the first event of the European Aquatics Championships, seven teams of divers took to the boards for the mixed team diving competition.

The mixed team diving event consists of teams of two to four athletes competing across six dives. Each team must have at least one male and one female.

This year’s title went to the Russian team of Kristina Ilinykh, Evgenii Kuznetsov, Ekaterina Beliaeva, and Viktor Minibaev, who came from behind to claim the first competition of the week. The Russian team finished with 431.80 points, narrowly edging out Italy, who finished with 428.00. Germany, who were the favorites to win the event, took third in 421.00. The team from Germany sat in first following the first three dives but fell behind both Russia and Italy on the 10m platform portion of the competition.

The best single dive also came from the Russian team, with Kuznetsov scoring 96.90 points on his dive from the three-meter.

Kristina Ilinykh, who won the bronze medal in the 3m synchro event at the 2017 World Championships in Budapest, had to say of her team’s win:

“It was great to dive here in Duna Arena in this beautiful pool, but without an audience it’s a little weird. All of our dives were great. We are so happy to have won the gold medal.”

Ilinykh, along with Kuznetsov, have both qualified already for the Olympics later this summer. Beliaeva narrowly missed out on qualifying for the Games at the Diving World Cup earlier this month.

Russia improved upon its finish from the 2018 European Championships where Kuznetsov teamed with Iuliia Timoshinina to finish in third behind Germany and Ukraine. The Ukrainian team finished in 5th in 2021.

While his team finished in third, Partick Hausding of Germany continued his medal streak at the European Championships. Since 2008, he has earned at least one medal every time the meet has been held.

Last edited 1 year ago by tkrisz
1
0
Reply
He said what?

I’m curious how the medals are going to be presented in Tokyo.

0
0
Reply
SwimFani
Reply to  He said what?

Medals will be sent via Amazon Prime.

0
-1
Reply
Torchbearer
Reply to  He said what?

Surely Germany got the first medal, as bronze is awarded first.

At the recent gymnastic World Cup in Baku , the medals were delivered by drone.