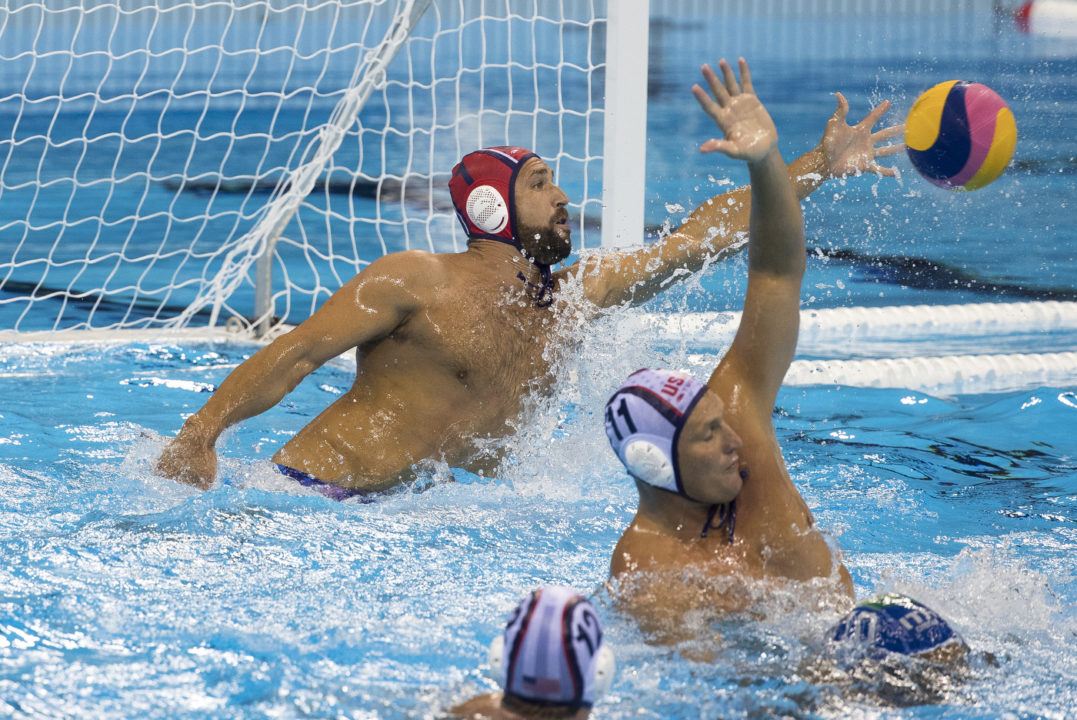 Sunday was the last day of pool play in the men's water polo tournament in Rio. Eight of the ten teams will now move on to the quarterfinals. Current photo via Jeff Cable/USAWP

Recap of the final day of pool play in the men’s water polo tournament, August 14, 2016:

Montenegro scored in the first 20 seconds of play, but Spain evened the score 30 seconds later. Montenegro went ahead on a power play at 4:03 left on the clock. Spain scored a penalty to end the quarter tied, 2-2. Montenegro put 2 more goals in the net early in the second period before Spain scored 3 times in a row. The teams went off at halftime with Spain leading, 5-4. Both teams score 3 goals in the third quarter and headed into the final period with Spain up 8-7. Montenegro tied the score on a power play goal from long range. For the next four minutes the score was tied at 8-8. Then Spain scored with 2:14 left to play. Montenegro scored the tying goal at 1:30 on the clock. Spain missed their final two shots and Montenegro had a blocked shot, and the game ended in a 9-9 tie.

While Greece was already assured a spot in the quarterfinals, Australia needed a win to keep their hopes alive. They did just that, defeating a Greek squad that was 3-1 so far, and tied with Brazil at the top of Group A. Australia scored within the first 90 seconds of play to set the pace. Greece evened the score less than 30 seconds later, and then took the lead with 4:27 left to play in the first quarter. Australia put two in the net over the next 2 minutes before Greece tied the game at 3 apiece with 1:33 left. Australia added two goals before the end of the period and led 5-3 going into the second quarter. Australia dominated the second period, outscoring Greece 5-1 to go up 10-4 at halftime. The third period was a defensive battle between the two teams; the only goal came from Greece with 2:07 left in the quarter. Australia and Greece each scored a goal in the 4th quarter and the game ended with Australia winning 12-7.

France ended their Olympic tournament on a high note, earning a solid win against defending Olympic champions, Croatia. While Croatia put the first goal into the net with 4:30 to play in quarter 1, France quickly went up 2-1 over the next two minutes, and closed out the period leading 3-2. Both teams scored three times in the second quarter and the teams went off to the halftime break with France leading, 6-5. Croatia tied the score within the first 90 seconds of play in the third quarter, but France got two unanswered goals to enter the fourth quarter up, 8-6. The final period was an exciting back-and-forth battle between the two squads. Croatia narrowed France’s lead to one point with a long-distance shot at with 6:44 left to play. France moved ahead 9-7 on a power play goal with 3:35 on the clock. Croatia took advantage of a man-up situation to put one in the net at 1:13 left. Croatia had two more opportunities to even the score over the last minute of play but were unable to get the ball past French goalkeeper Remi Garsau. France held on to win, 9-8.

It was do-or-die for Serbia, who absolutely needed a win against Japan in order to advance to the knockout rounds, since Australia had defeated Greece earlier in the day and was now a point ahead of Serbia in the Group A standings. Japan got off to the early lead on three goals by Koji Takei and two by Keigo Okawa to lead Serbia, 5-2, at the end in the first quarter. Serbia came back in the second quarter and scored three unanswered goals, and the score was tied at 5-5 as the teams headed off for halftime. Serbia outscored Japan, 4-2, over the third period, and sealed their victory with 3 more goals over the final 8 minutes to win with a final score of 12-8.

Hungary jumped right out to an early lead with three unanswered goals in the first quarter. Hungary was up 5-0 before Brazil, who had previously only lost once, put one in the goal. Coming back after the halftime break leading Brazil 5-1, Hungary scored a sixth goal on a power play with 5:20 left in the third quarter. Brazil responded with a goal 30 seconds later to make the score 6-2. Within the next minute of play both teams had added another to the tally. Brazil scored to narrow Hungary’s lead to 7-4 with 1:33 left, but Hungary closed out the quarter with one more in the last 20 seconds. Hungary and Brazil both scored twice in the final period and the game ended with a final score of Hungary 10-Brazil 6.