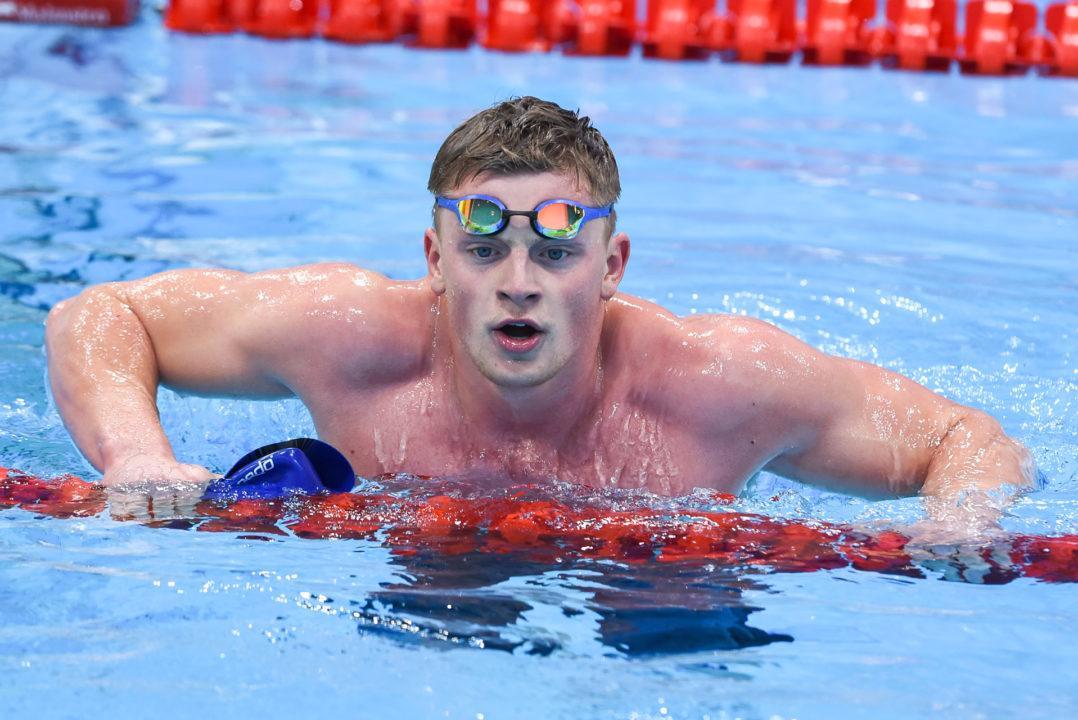 Great Britain's Adam Peaty will be chasing Olympic gold after setting the 100 breast World Record with a herculean 57.92 in 2015. Archive photo via Peter Sukenik/www.petersukenik.com

In 2015, Great Britain’s Adam Peaty shattered the World Record in the men’s 100 breast, swimming a herculean 57.92 to become the first swimmer to ever break 58 seconds. He wasn’t able to match that time later in the summer, but he still managed to win his first World Championship title with a 58.52 in Kazan. Peaty has already been faster than that this year, as he now leads the 2016 World Rankings with his 58.36 from the 2016 European Championships.

2012 Olympic champion Cameron Van Der Burgh will return to the Olympic stage for South Africa after placing 2nd behind Peaty in Kazan. His 58.49 from last summer was his fastest swim of this Olympic cycle, and just 3-hundredths slower than his winning time in London. Van Der Burgh will have his prior experience and killer front half speed on his side, but he’ll be hard pressed by Peaty, who will be chasing gold at his first Olympics.

Both Americans who qualified in this event will also be swimming in their first Olympics this summer. In 2015, Team USA didn’t have a finalist in this race at the World Championships. Things are looking up for the Americans this summer after Kevin Cordes broke the American Record in semifinals at the 2016 U.S. Olympic Trials to become the 2nd fastest man in 2016. Cordes is heading to the Games with a personal best 58.94, and not far behind him is his Rio teammate Cody Miller with a 59.09 for 4th in the world this year. Miller narrowly missed the final at Worlds last summer with a 9th place finish.

Ranked 6th in the world in 2016 is Peaty’s teammate Ross Murdoch, who won bronze at Worlds last summer. Murdoch made a huge drop at that meet, swimming a 59.09 to get on the podium. This season, he’s been close to that with a 59.31 at British Championships, so we could see him dip into the 58-range as he battles for a medal in Rio.

World Championship finalists Giedrius Titenis and Jake Packard are currently 11th and 12th in the world this year, respectively. Lithuania’s Titenis broke 59 in semifinals at Worlds, posting a 58.94. That made him one of just five swimmers who have been sub-59 since 2012. Titenis wasn’t able to match that time in finals, clocking a 59-mid for 7th behind Australia’s Packard. Packard swam his lifetime best in that race with a 59.44, and could drop further into the 59-low range for a finals swim.

China’s Wang Lizhou became the first Chinese swimmer to break 1:00 in this event last September, and could be well on his way to a top 8 finish in Rio. Lizhou broke the Chinese National Record in this event last month, posting a season best 59.60 that ranks him 7th in the world this year. China hasn’t publicized its official Olympic roster, but it seems a good bet Wang will be a part of it, unless he faces a more serious penalty for testing positive for clenbuterol in 2015 than originally indicated. So far, reports have indicated Wang will face a “warning penalty” from the Chinese federation, but no official ban from competition.

Brazil’s Felipe Silva and Joao Gomes will be looking to grab medals in this event on their home turf, and they’re in a strong position to do so with a pair of 59-lows already this year. Both swam their season bests at the Maria Lenk Trophy, which served as a test event for the Games. Gomes won the race there with 59.06 that ranks him 3rd in the world, with Silva just behind in 59.26.

CVD to win, just pipping Adam- he has the edge on the skills and this could prove the difference. The others are not technically good enough to endure the pressure/excitement without losing efficiency, Murdoch gets better given his technical robustness!

Peaty cannot break WR in RIO…..i predict close race between Peaty and Cordes….bronze will be between Cody OR CVDB

Peaty for gold Silva for Silver!!!!

I think this is peatys to lose. My concern is that his start puts him under huge pressure and he was .6 slower in world finals than trials, and the pressure at Olympics will be far greater. I think he will get WR in semis and will be slower in final but will just get the win (provided he does get an awful start and rush his stroke too much).

1) Is Felipe Silva really from Australia?
2) For me Peaty is a lock for gold and Van der Burgh is a lock for silver, bronze should be between Murdoch and Cordes.
3) The other spots in the final should be between Gomes, Miller, Franca, Titenis, Wang, Packard, Koseki (if he swims it), Gyurta, the two russians and hopefully Vom Lehn.
4) Dark horse: Gyurta or Balandin

This event is so freaking stacked

Cameron will come good, as ever!