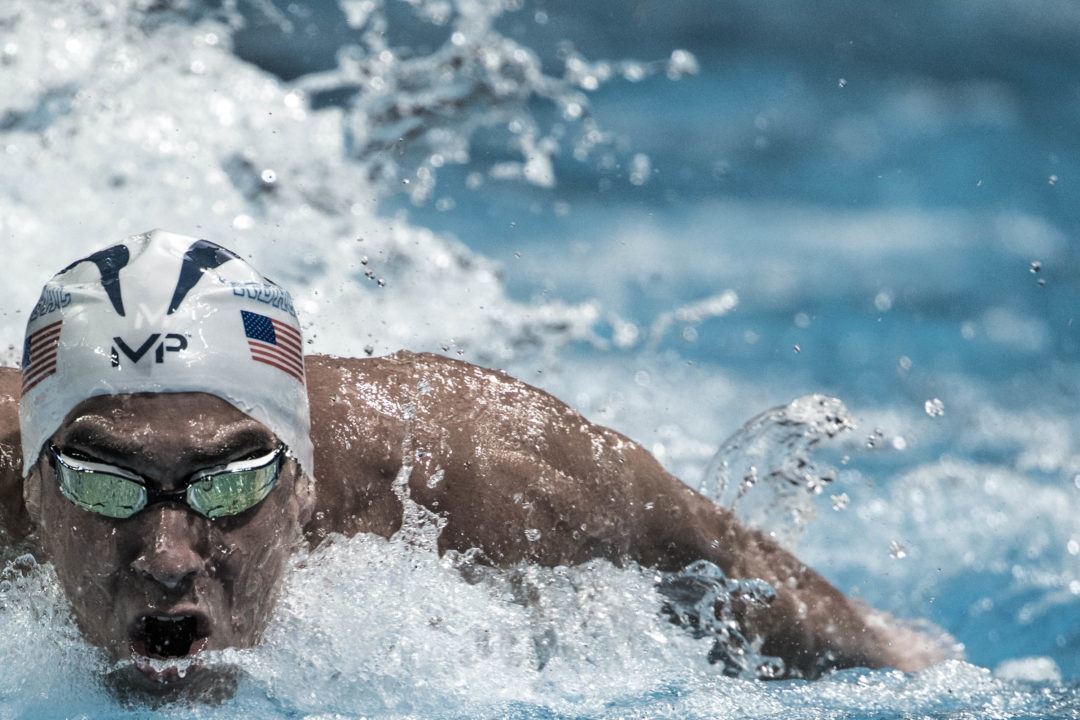 While Michael Phelps will best be remembered for winning 8 gold medals at the 2008 Beijing Olympic Games, he was arguably better in 2007. Archive photo via Mike Lewis/Ola Vista Photography

2007 was one of the most exciting years in the history of swimming. While Michael Phelps will best be remembered for winning 8 gold medals at the 2008 Beijing Olympic Games, he was arguably better in 2007.

While the loss of an opportunity to contest the 400 medley relay in the finals stung, the men’s 400 freestyle relay was exceptional for Phelps. As the lead-off swimmer for Team USA, Phelps got the team out to an early lead by clocking a 48.42, which would have won gold in the individual 100 freestyle, 0.01 ahead of Canadian Brent Hayden and Italy’s Filippo Magnini who shared the gold with a 48.43 final.

Though Phelps did swim faster at the Beijing Olympics in every single one of these events, his dominance in 2007 was unparalleled. Phelps abolished his own World Record in the 200 fly in Melbourne, taking a massive 1.62 seconds off his former mark. The record Phelps broke is noteworthy in its own right in that, when Phelps put up his 1:53.71 at the Mizzou Grand Prix he was still in hard training and even had a full goatee and hair spilling out from his cap. For the record, Phelps wore a Fastskin Pro legskin swimsuit when he set the World Record in Columbia, though in Melbourne he opted for the Fastskin II jammers, released in 2004.

Swimsuit technology at the time of the 2007 World Championships is another thing to consider. The Speedo Fastskin II was at the apex of swimsuit technology during the 2004 Olympic Games, while the newer Fastskin Pro was revealed in early 2007. Though technical racing suits would go through their infamous polyurethane phase in 2008 and 2009, the Fastskin Pro paved the way for the textile swimsuits used today, but that’s a topic for another article.

Phelps took the race out quickly, setting the pace at the 50-meter mark. At 100 meters Phelps was nearly a full second ahead of the next-closest competitor, Russia’s Nikolay Skvortsov who would take third. Phelps’s underwaters throughout the race were classically great, though the rhythm of his stroke rate throughout the race is what propels him so far ahead of the competition and his own World Record line, which is beneath his feet when he finishes the race.

Now, on the 13th anniversary of the race (March 28th, 2007), Phelps’s swim in Melbourne still stands as the 4th-fastest performance all-time. Phelps only ever eclipsed the time twice: first, at the 2008 Beijing Olympic Games (1:52.03), when his goggles famously filled with water causing him to swim blind, and again at the 2009 FINA World Championships (1:51.51) in Rome. Phelps’s 2009 mark stood until 2019 when it was broken by Hungarian Kristof Milak.

Phelps’s second 100 remains fairly consistent over time despite his increasingly quicker pace on the first half of the race, where he set the pace and dared the competition to try and keep up. In 2003, Phelps took the race out in 54.89, though 2006 and early 2007 were characterized by (relatively) slow second-50 splits which caused him to rely more on his back-half. By Melbourne 2007 Phelps was over a full second faster on the first 100 splitting a 53.62, and by 2009 Phelps was out in a 52.88, fully 2 seconds faster than 2003.

Phelps’s performance is one of only 15 in the long course pool to ever break the 1-minute 53-second barrier. Phelps was, of course, the first person to ever break 1:55, 1:54, 1:53, and 1:52, though Milak stands alone as the sole performer under 1:51. Though the 1:53 barrier has been broken 15 different times in the history of the sport, only 6 men have actually done so, with Phelps owning six of those performances, Milak four, Laszlo Cseh having two, and Daiya Seto, Chad le Clos, and Takeshi Matsuda holding one each.

Due to the overall decrease in times since, 2007 Phelps is hard to explain for those who don’t remember it.

To me, the equivalent would be if last summer Dressel:

Phelps ‘07 was indeed the best world championships performance, ever…and behind the ‘08 games the second best swim meet performance of anyone, ever.
yup, i said it. better than spitz, dressel etc

I love watching his 200 free vs PVDH…great underwaters!

Phelps always considered 2007 to be his best year