Reverse Circle Swim: Why Do It? 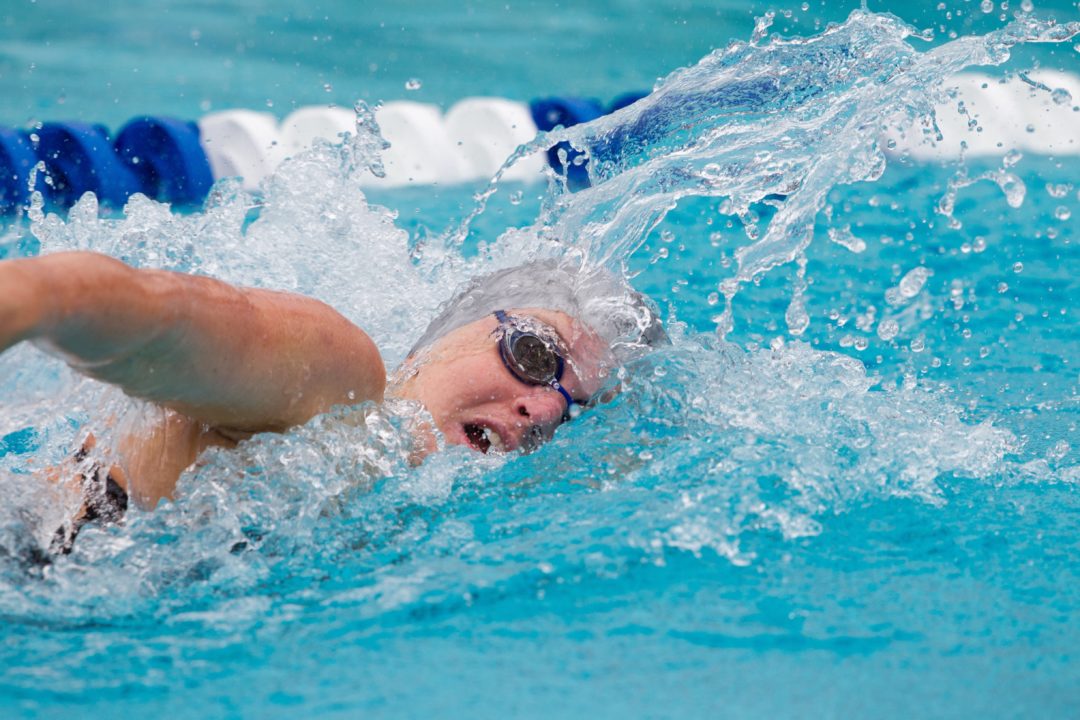 After four years of swimming nearly every practice in a reverse circle pattern, I've gotten used to life on the left lane line. However, when I brought my training pattern to a new team, the first question I heard was "Why?" Current photo via Tim Binning/TheSwimPictures.com

After four years of swimming nearly every practice in a reverse circle pattern, I’ve gotten used to life on the left lane line. However, when I brought my training pattern to a new team, the first question I heard was “Why?”

My answer has changed daily, depending who is asking, how much time we have on the wall and whether I feel like trying to explain everything all at once. So, for all the club athletes I’ve confused, here’s a list of reasons to swim the “wrong” way during practice, at least some of the time.

1) Stop Circle Swimming During a Race
“Hey, that was a great swim. Just one thing – stop circle swimming while you’re racing.” A show of virtual hands – who has had a coach tell you to avoid circle swimming during a race? It’s hard not to! Your body gets so used to this pattern of coming into the wall at an angle and pushing off at an angle during practices, day in and day out. When it matters in the big time, your brain shuts off and your body does what you’ve trained it to do – which (in most cases) is circle swim. (To those few of you who practice swimming straight up and down the black line during a workout when there are others in your lane, please…don’t.)

One great thing about learning to reverse circle swim is that you become a little more aware of where your body is in the water, and when it comes down to racing, the added awareness – and break from that mindless right sided slog – can help straighten you out over the black line.

2) Train Like You Race
With the possible exception of distance swimmers, you almost never race someone who is headed in the opposite direction you are. So swimming every lane in the regular old circle pattern makes little sense for practicing the way you’re expected to race. Alternating one lane of regular circle swimming with one lane of reverse circle swimming creates an opportunity for pairs of swimmers to race one another down the lane line – the same way they might in an actual race.

3) No More Butt Grabs or Broken Hands
I know I can’t be the only one who has been swimming backstroke down my side of the lane, when suddenly a hand from a swimmer doing backstroke in another lane in the other direction has made unwanted contact! One of the great things about swimming in pairs down the lane line is that you get to avoid this bit of contact because you’re always on the same swimming plane as the person who would otherwise be passing you.
Other benefit if you’re an athlete with a really wide recovery that tends to go over the lane line, you won’t lock arms with someone traveling the other way. That saves you from shoulder injuries, broken paddles, bruised hands and a myriad of other woes swimmers just take for granted!

4) No Crowded Lanes At A Meet
Okay, so this one you’ll probably need some friends for. If you get a pack of five or six athletes together who are all comfortable with reverse circle swimming and spread them out in a lane at a meet, no one will jump in your lane. Even as a solo athlete, I’ve had success in defending an empty lane at the Minneapolis Grand Prix by reverse circle swimming because I confounded everyone who was watching me swim. The only problem here is that if anyone stops swimming, other athletes take the opportunity to “correct” the reverse, rather than joining it.

5) Keeps You on Your Toes
Seriously. When was the last time you were swimming during warm up in a regular old circle swimming pattern and had even a momentary flash of What am I doing? type thinking? And I’m not talking Why am I swimming? I mean Where’s my hand? What’s my head doing? Was my flip turn crisp?

If there are any among you who don’t run on auto pilot during warm up – my hat’s off to you. If you reverse circle swim, you can’t turn your brain off. The moment you do, your body will shunt you to the “right” side of the lane and suddenly you’ll be facing down another swimmer for a head-on collision. (Been there, done that, got the bruise to prove it.) And with your brain forcibly turned on to prevent running into people… Well, let’s just say you’re more engaged, and open to hearing/learning/absorbing new things.

Not sure if you have really thought this one out – 3) No More Butt Grabs or Broken Hands
– if you’re making other lanes reverse circle swim you’re going to have the same problems.

Sean – one lane swims clockwise and the next lane swims counter clockwise. So there is no smashing hands – unless its someone in your own lane.

The real trouble is switching lanes during practice and making sure the [person knows which way this lane circles.

As a backstroker I can attest you still grab hands (or ankles if speeds differ) reverse circle swimming…butt grab or hand-holding, take your pick!

It is actually against the rules to revers circle swim in warm up. You are lucky you didn’t get thrown out of the meet.

Where is that written?

actually we all hate it ar practice