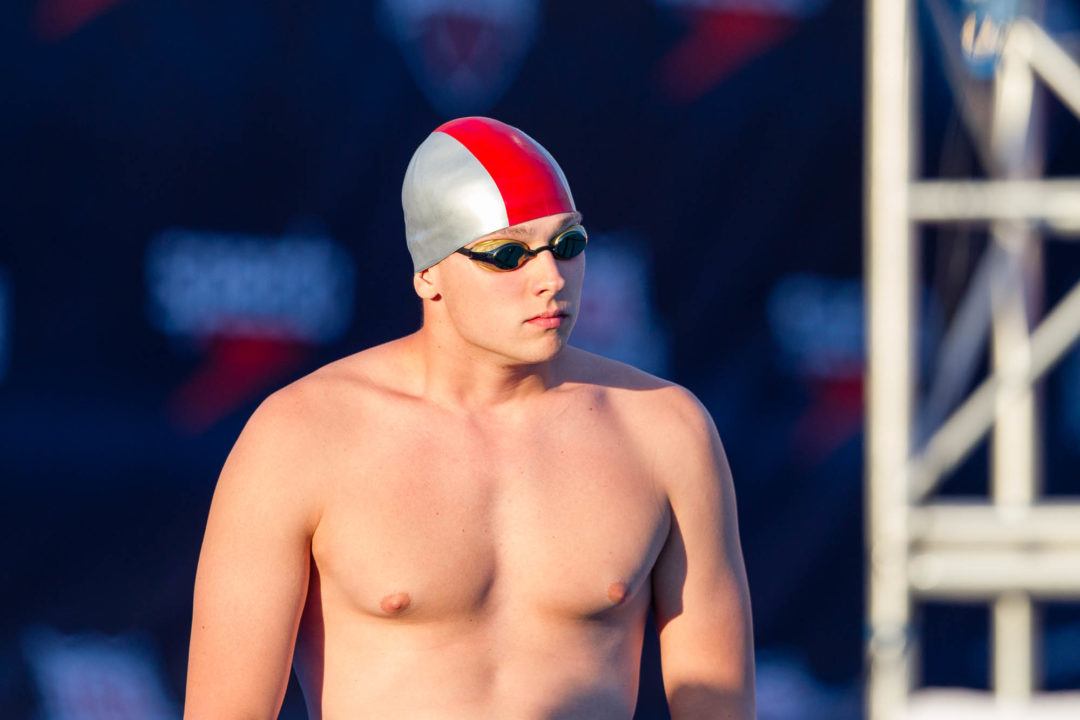 9th-seeded Justin Ress has scratched the 200 backstroke in favor of the 100 freestyle at day 3 prelims, and he gets some instant help as 9-seed Matt McHugh has scratched the event. Archive photo via Tim Binning/TheSwimPictures.com

Ress was entered in the 200 back and 100 freestyle, with the plan seeming to always be that he’d pick one event or the other. Ress has been used on all four of NC State’s relays so far, so his scratch in this event allows him to swim NC State’s 400 free relay as his 5th relay and 7th event if our reading of the rulebook is correct.

(Note: the NCAA pre-championships manual suggests that any athlete entering three events like Ress did cannot swim more than 4 relays: “If a student-athlete is entered in the NCAA championships in three individual events, that student-athlete may only swim in up to four relays.” But the NCAA swimming rulebook also seems to suggest that a scratched event doesn’t count towards a swimmer’s 7-event limit, while a “DFS” or declared false start does. So it depends on whether Ress’s scratch is functionally different than a DFS per Championships rules. We’ll seek clarification on this from the NCAA in the morning.)

The bulk of the scratches for Saturday morning come from teams resting their 100 freestylers to load up and make a run at the 400 free relay. That seems to be the thinking behind McHugh’s scratch for Ohio State, even though he was seeded well within scoring range. Ohio State also scratched 22nd-seeded Josh Fleagle.

Here’s a look at all of the scratches for Saturday’s heats. The heat sheet is linked at the top of this story:

Justin Ress has only had one individual event so far (200 free), so he is available for the last relay.

Lovethemile – that seems to depend on whether the NCAA Championships draw a functional distinction between a scratch and a DFS. We’ve added in a note on that distinction above and we’ll get the NCAA’s take when we get a chance tomorrow

Can we see the mile heat sheet? With the times of the heats?