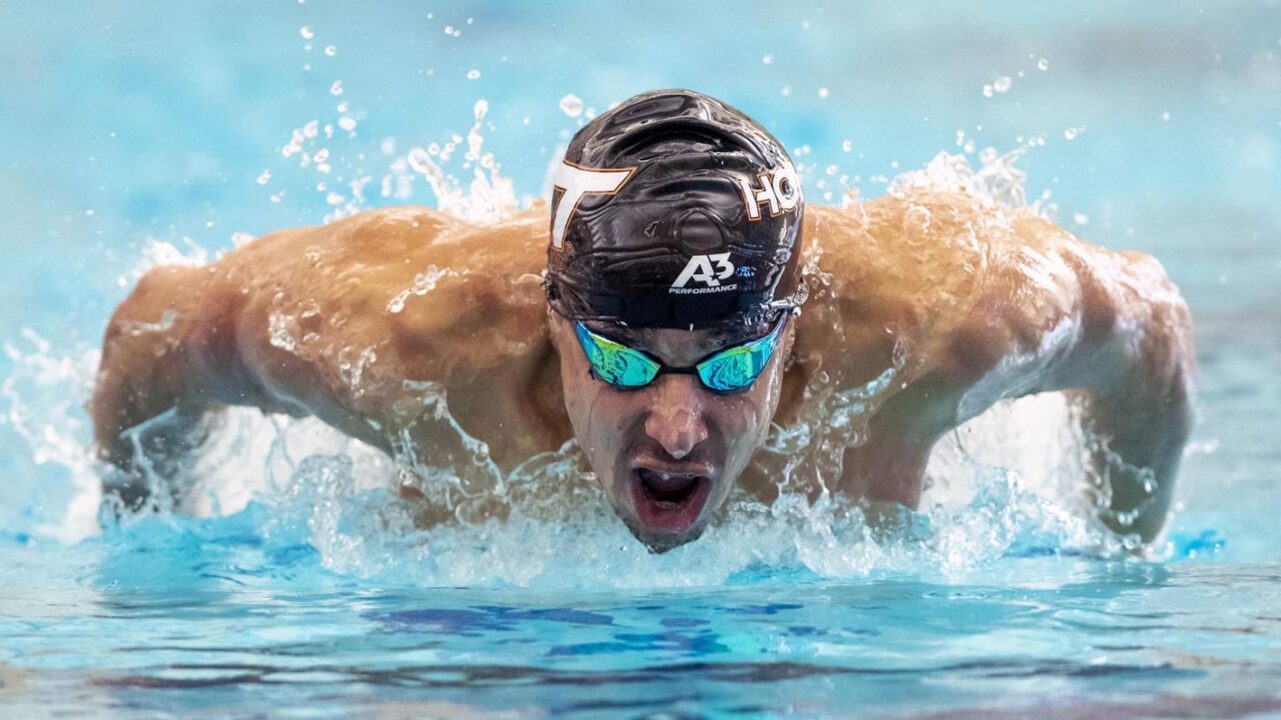 Virginia Tech sophomore Youssef Ramadan blasted a 44.68 in the 100 fly on Saturday, faster than any other swimmer in the nation this year. Current photo via Virginia Tech Athletics

SEC program South Carolina joined ACC foes Virginia Tech and Duke in Christiansburg, Virginia over the weekend for a three day, prelim-final invite ahead of the ACC and SEC Championships, which both start next week.

The host Virginia Tech Hokies headlined the men’s events, with several of their top swimmers firing warning shots ahead of ACC’s next week and posting a very impressive 400 free relay on Sunday night.

All American sophomore Youssef Ramadan was the star of the weekend, sending a pre-championship season warning shot to the rest of the NCAA in the 100 fly. The Cairo, Egypt native blasted a pair a sub-45 second swims, posting a 44.79 in the prelims before chopping another tenth off in finals with a 44.68, just off his nation-leading time on 44.64 from midseason. Ramadan’s lifetime best sits at 44.32 from last year’s ACC Championships, though he was disqualified in the prelims of the event at last year’s NCAA Championships.

Ramadan also ventured to the longer version of the stroke for the first time ever in SCY, posting a 1:43.00 200 fly in Sunday’s finals.

His butterfly groupmate Antani Iavanov, who hails from Bulgaria and made a pair of butterfly A finals at last year’s NCAA Championships, also posted a pair of impressive swims. Iavanov finished behind Ramadan in the 100, touching in a season-best 45.48 and then posted a massive 1:40.84 in the 200 fly, another season best. His 100 fly now ranks him 8th in the country, while his 200 fly is now fourth in the NCAA.

The two also paired with teammates Carles Coll Marti and Luis Dominguez Calonge to post a very impressive 2:49.66 in the 400 free relay, a full second faster than Tech’s midseason time and an NCAA A cut. That now slides the Hokies into 8th in the NCAA this year and puts them squarely in the conversation for an A final finish in the all-important relays.

Similar to the men’s meet, the Hokie women also provided plenty of highlights ahead of the ACC meet next weekend.

All American backstroker Emma Atkinson flashed some speed in her signature event, the 200 back. The Brookhaven, Pennsylvania native blasted a new season best of 1:51.84, just tenths off of her time from the ACC Championships last season. Atkinson also swam a prelim-only 100 back, touching first in 53.30, but ultimately scratched the final. Last season, Atkinson was fourth in the 200 back and 11th in the 100 back at NCAAs, and currently sits 8th in the nation in the 200 and 26th in the 100.

Ramadan headed towards a 43

The juice is getting loose

Here comes the DQ at NCAA’s like last year