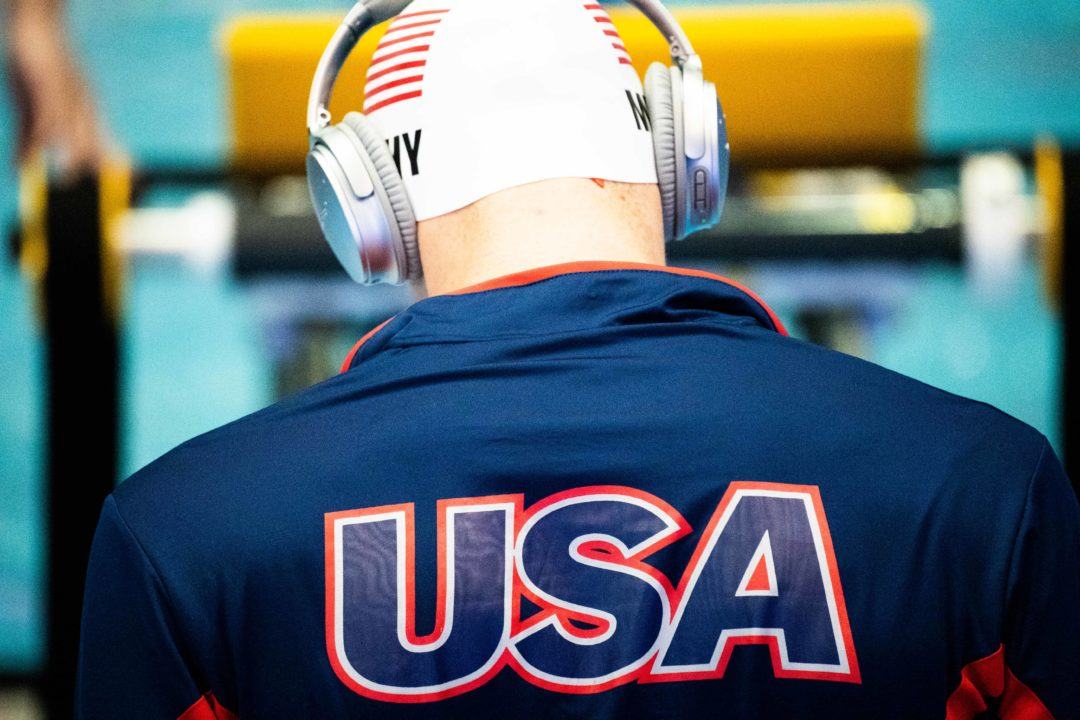 With two of three qualifying meets complete, the framework of the 2018-2019 U.S. National Team is well in place. There... Archive photo via Mike Lewis/Ola Vista Photography

Twichell, 32, competed in her first Olympics just over four months ago.

How did Lydia Jacoby handle the pressure at the US Olympic Trials and Olympic Games? It wasn’t her first time performing in front of a big crowd.

The meet is scheduled to begin one day after Russia’s ban on hosting world championship events ends.

You can bid to win a Caeleb Dressel-themed sportscar as part of this year’s USA Swimming Foundation Golden Goggles Auction.

What is the National Team?

In contrast to the traveling rosters for meets like Pan Pacs, World Championships or World University Games, the U.S. National Team refers to a broader roster of the nation’s top swimmers in every event who can qualify for a wide range of benefits from USA Swimming.

For more detail on those specific benefits, check out our story on the subject from late 2014 here. The short version is that making the national team carries a certain level of prestige, financial support and other perks like access to the Olympic Training Center and video review and massages at some major meets.

For 2018-2019, the U.S. National Team will be selected from the top 6 times in each Olympic event from the combined results of U.S. Nationals, Pan Pacs and Junior Pan Pacs. As opposed to travel roster selection, this roster does take into account prelims swims in addition to swims from any final. Relay leadoffs, time trials, swim-offs and intermediate splits aren’t included.

Open water swimmers have already been selected based on the top 6 finishers at the 2018 U.S. Open Water Nationals 10K race. Unlike the pool team, they’re locked into their spots.

These rosters aren’t final, only because a swimmer from Junior Pan Pacs could still improve their standing. These lists, in a way, then, are incentive lists for any Junior Pan Pac swimmer looking for National Team status. Those who don’t make it will be likely to make the Junior National Team instead. The junior team is selected in a somewhat-similar way: the top 6 juniors (as of September 1, 2018) in each Olympic event are eligible make the roster, though this team is selected from long course times swum in the calendar year 2018 rather than from specific meets. It also limits the total roster to 40 swimmers and bases priority and selection on world ranks.

What’s Sydney Pickrem doing in there? Anything we should know about there? 🙂

If you’re from Texas, you’ve gotta be American.

Is there a link to projected Worlds/WUGs/PanAm teams?

Still very tentative and unofficial at this point: https://swimswam.com/final-rosters-king-into-worlds-in-200-breast-bumps-galat-to-pan-ams/

Not that it impacts your National team comments, but National Junior team is far more complicated and smaller than 6 per event. Max 40 per gender and must be in top 75 world women and top 100 world men if not top 2 US (more for relays) in an event.

I see 40 limit is mentioned in article, either I missed it or it got added. The real limit, at least from last time was the world ranking. I think men was in low 30’s pool swimmers with some events having 6 names and others have 2.

Was wondering about the other golden boy of swim swam, Cameron Craig??? Where’s he been all summer?

Where’s he been all year?

Thank god…maybe that means these stupid comments will die 🤷🏻‍♂️

MA’s name starting to work its way up the National Team rankings much like his NAG run. It will be fun to see if he can stretch his success in the 50’s to the 100s. He is already in the top 5 in breaststroke (1), butterfly (4), and backstroke (4). Being ranked 1st in the 50 free, not sure why he hasn’t popped a big 100 free yet.

I don’t think it has anything to do with endurance, as seen by his stroke 100s. Seems to be more about stroke mechanics when he breathes (cf those brutal 200 IM finishes in years past). Not sure why he hasn’t been able to fix it, given everything else he’s accomplished. He should be cracking 48.

Working his way up? He is no longer an age-grouper – he is in-fact one of the top few US male swimmers right now! Congrats to MA for a fantastic summer competing with the best in the World!

I was thinking the same thing. 1st in 2 Olympic events is incredible for a 19 year old.

It’s great but not “incredible”. Words have meaning. We have seen in the last 20 years some guys at that age who were already world record holders, world champions, olympic champions or all of that at the same time. Please, swimming has not begun this year!

As long as we’re splitting hairs, I’d call it “incredible,” but maybe not “unbelievable” or “flabbergasting.”

Question: are the times to qualify for the National team taken fro the A or B final at Nationals? If they are only from A the Mens 400 free list is incorrect.

“As opposed to travel roster selection, this roster does take into account prelims swims in addition to swims from any final.”

Does junior Pan Pacs count towards the National team?

You are cracking me up! LOL

Good answer Benedict. BUT – don’t Junior Pan Pacs still have to take place? Can those times count toward the national team?

You’re expecting people to read the article they are commenting on? What’s wrong with you?

The guys 2br isn’t in order.