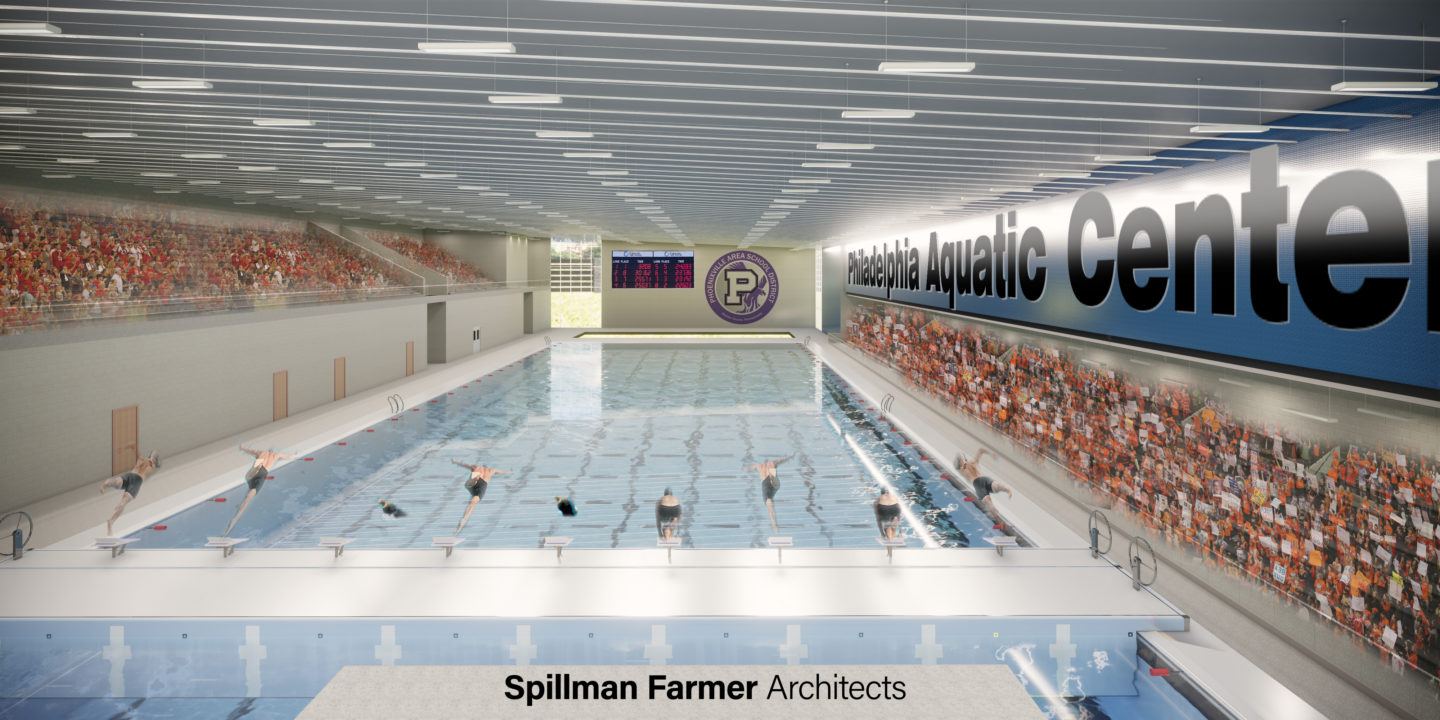 The project, with Olympian Brendan Hansen on advisory board, is targetting July 1, 2023 to open. Current photo via Spillman Farmer Architects

The proposed name is The Philadelphia Aquatic Center, and plans for the facility feature an Olympic-sized pool, a diving well, and a separate shallow warm water to host swim lessons. There is also a proposed area for healthcare providers to administer aqua therapies.

The following mock-ups were done by Spillman Farmer Architects, whose president Dan Harrigan is notably the 1976 Olympic  200 back bronze medalist.

Phoenixville YMCA volunteer swim coach Dan Cooke (father of current Penn State swimmer Maddie Cooke) proposed the project five years ago. He and others who saw the need for such a facility fundraised $30,000 for a feasibility study performed by the Isaac Sports Group (of youth tech suit study fame). The study concluded that the aquatic center would be beneficial to the community’s needs in multiple aquatic  areas, and that comparable facilities nation-wide are doing well financially.

So, Cooke and company created three objectives for the proposed facility:

With those goals in mind, VFAC and the school district have entered a 50-year lease on the land. The district will receive lease payments for the land in the form of credits for swimming, diving, water polo, and learn to swim program time – a projected total value of more than $1.1 million over the duration of the agreement.

In the project’s press release, PASD Superintendent Dr. Alan Fegley describes the project a  “an amazing example of a public/private partnership.” He continues: “They [VFAC] will be using a piece of land that has been unused and building something for the public good.”

The targeted opening date is July 1, 2023, and VFAC will manage the facility. Additionally, VFAC has nabbed six-time Olympic medalist Brendan Hansen – a Havertown, PA, native – to serve on the project’s advisory board.

VFAC has raised around $1 million thus far, and is in the process of hiring a fundraising/philanthropy consultant for the rest. The University of Valley Forge (where the facility with be located) also plans to partner. According to Cooke, VFAC is in talks to find a healthcare partner to bridge the “missing link” in funding.

Stay up-to-date on the project through the Philadelphia Aquatic Center’s Facebook page.

If they have yet to recruit Danielle Strader to take part in this project, they should post-haste.
https://swimswam.com/us-national-team-member-danielle-strader-pursues-new-challenge-pool/

Thanks for the suggestion! Great idea!

This is great news! The area is starved for pool space and the location is great.

I’m actually living in Philadelphia right now and am shocked at how few pools there are. I’m right in Center City, and there’s only two pools available within a quick trip: the Christian Street YMCA, which is a small indoor 4-lane pool (old, but adequate for my purposes), and the Bellevue Club, which has a 4-lane pool with a little more light and a little newer, but still just a 4-lane pool.

awesome news about this pool…esp since sounds like it’ll have long course capabilities. area is definitely in need of more facilities. i know one of the big pools in Philly burned down last year. south jersey has some nice pools (GCIT), which you can get to in 20 minutes from Philly. Upper Main Line Y would be at least 30 min drive from center city. both those pools have long course options as well. welcome to Philly!

Have you been to GCIT? Most Middle Atlantic swimmers hate that pool. I wouldn’t call it nice. The UMLY pool is a 6 lane outdoor pool and restricted to be used by UMLY only. Other teams that were YMCA teams in the same association were threatened to not only have their swimmers banned from their team (not UMLY mind you) but their coach fired if they showed up to swim laps there. So I wouldn’t call that UMLY pool an option.

Probably why there was never a scene of Rocky Balboa swimming laps.

Actually, there was, but it was from his time in LA https://m.youtube.com/watch?v=kCfgqBVppdI

Agree with the previous poster about the lack of “legitimate” pools available to the public (and Masters swim clubs) in central Philly. Another option I’ve come across in my search (because driving 30 minutes to the ‘burbs or NJ to swim gets old quickly) is a membership to Drexel’s Rec Center. Their memberships are available to the general public, and their pool’s open swim times are fairly extensive. (Appears to only be about $50/month too.) http://drexel.edu/reccenter/programs-and-activities/aquatics/

Great news. I’d love to see a lot of deck space and a GREAT HVAC system. Bring Nationals back to the championship city. Go Eagles!