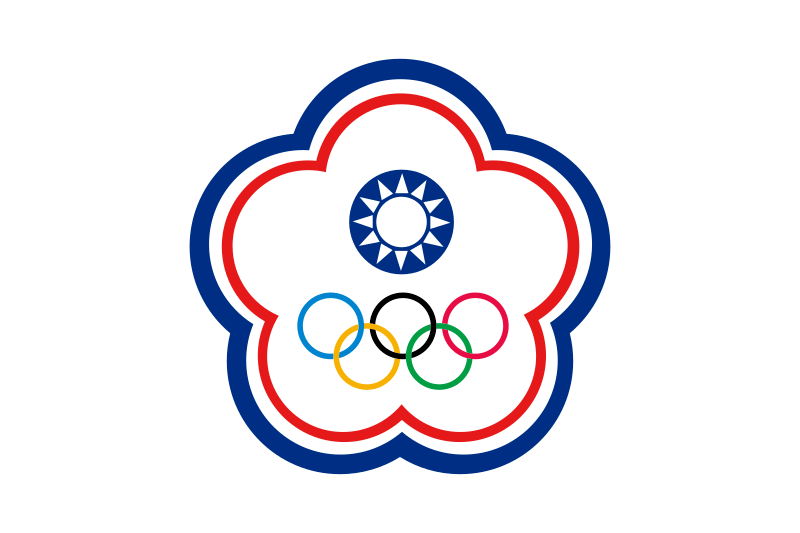 The 5-petaled plum flower adorns the flag used by Chinese Taipei at the Olympics, which is not the same as the flag of Taiwan.

What’s in a name? In the geopolitical delicacy of east Asia, a lot.

That’s why a group of Taiwanese citizens raised so many eyebrows when they submitted hundreds-of-thousands of signatures last week asking for a public referendum on how the state would be recognized at international sporting events.

The state of Taiwan, which lives in a sort of stare-down with China, have a population of around 23 million, and their own Olympic team. Taiwan (also known as is fully self-governing, but under constant threat by the People’s Republic of China (mainland China) of military action in the event of any formal declaration of independence.

The complex history of politics of Taiwan (read more on the Wikipedia page here) dates back more than a hundred years, when Taiwan was under the rule of Japan after being ceded by the Qing Dynasty in May of 1895. The area was renounced by Japan after World War II, when different sides were fighting for control of China. Via a Chinese Civil War, a certain political faction retreated to Taiwan (the Republic of China), and the modern-day government known throughout the world as “China” (the People’s Republic of China) believe that they are the only rightful government.

The nuanced details go much deeper, but for the purposes of the discussion of sports, know that while Taiwan sends its own teams to international sporting events, the PRC is the only recognized government of China by the United Nations, and only around 19 countries or states have formal diplomatic relations with the Republic of China (Taiwan). Under pressure from their neighbors, Taiwan competes at the Olympics (and at many other international events) as Chinese Taipei. At the Asian Games, Taiwan (or Chinese Taipei) are not allowed to compete under their own flag, instead using the banner below, which is the outline of a 5-petaled plum blossom.

For those who accept the non-universal argument that Taiwan is, in fact, just a part of China, Taiwan is not the only team that competes separately from their sovereign state. Since 1996, a National Olympic Committee can only be recognized by the Olympic Charter after recognition as an independent state by the international community (which is a threshold that Taiwan would not likely meet). But, those new rules do not apply retroactively, so the IOC has not had to answer the no-win answer to Taiwan’s sovereignty. The IOC currently recognizes 206 National Olympic Committees: the 193 member states of the United Nations, Palestine, the Cook Islands, Kosovo, Taiwan, and 9 less-disputed dependencies: American Samoa, Guam, Puerto Rico, the US Virgin Islands, Bermuda, the British Virgin Islands, the Cayman Islands, Aruba, and Hong Kong. In some sub-Olympic competitions, such as the swimming World Championships or Commonwealth Games, there are other dependent states that compete independently, such as the Faroe Islands or the home nations of the United Kingdom.

Taiwan was not allowed to compete in the 1976 Olympics in Montreal unless it stopped using the name “Republic of China.” They boycotted the 1980 Olympic Games over the name “Chinese Taipei” before first using it in 1984.

In a referendum that threatens to tip the delicate equilibrium of the Olympic question, though, campaigners in Taiwan have submitted enough signatures to trigger a public referendum about referring to the country as “Taiwan” rather than “Chinese Taipei” in future Olympic Games. To be specific, they obtained 520,000 signatures, which is well-over the 280,000 signature threshold.

Presuming final approvals by the Central Election Commission, the matter would go on the November 24th public ballot. If at least 25% of Taiwan’s eligible voters vote ‘yes,’ and there are more ‘yes’ votes than ‘no’ votes, then the government must draft a bill reflecting the results to be voted on by the Parliament.

Beijing has already taken notice of the campaign, saying that Taiwan would “swallow its own bitter fruit” if the change happened, threatening to block them from competition at future international sporting events.

Interesting article, Braden. I spent a lot of time in Taiwan, and I am currently in China. Here is my view from the “battlefield.”
it is just matter of time before Taiwan becomes part of China. That will be achieved, not militarily – China is too smart for that, but economically. Older people are still fiercely for independence, but young people don’t care. You know why? Because most of them are already in China. They work in China, because all industry already left Taiwan for China. Young Taiwanese are feeling more and more mainland Chinese, because China gives them opportunities it could never offer before.

I haven’t lived in Taiwan and don’t know how people there prefer to see their future, but your example of “biggest prove” looks strange and proves nothing at least to me.
Long lines to buy products of high quality indicates that there is a deficit and people are purchasing not for consumption but to resale. I lived in the society like this and there was a developed illegal black market that made some group of population very rich. Chinese people (mainland) who are working with me say that the life outside of big cities is completely different and isn’t attractive at all. They say that there is a high level of suicides among young people in urban areas. That… Read more »

Lines in front of expensive stores show that the standard of Chinese “middle class” is getting better and that was my point about good life Taiwanese youth that works in China can have in China. I never commented on life in China in general and remarks about life in countryside are valid (they even treat workers from villages badly in big cities, but that is a long story). About young professionals that prefer to work in USA… those numbers are rapidly shrinking. They prefer working in Huawei than working in Apple and they are going back home (to big cities).

Trade war with China is not about “unfair trade policies”, it is because of ever expanding Chinese influence internationally, and… Read more »

I’m not in the position to argue with you. My information is from the second hand store. I just remember the long lines near expensive stores where one could buy something with the foreign currency only. And it was strange because only a few were allowed to have it legally (10 years imprisonment otherwise). In no way these long lines indicated the well-being of middle-class in this country. This class hadn’t simply existed.

My children and my friends are working on west coast: San Francisco, Seattle, Vancouver. No shrinkage was reported.

Actually, as a Taiwanese young person myself, I can tell you that your point about “Young Taiwanese are feeling more and more mainland Chinese” is completely wrong. Search for any public surveys done in the recent years in Taiwan and you can see that now, more than ever, Taiwanese are identifying themselves more as “Taiwanese” rather than Chinese. It is actually the older generation that are holding on more tightly to the “Chinese” identity.

However, your point about China offering more opportunities to young people is correct. They have been attracting a lot of young professionals with higher salary and opportunity and it’s actually a big issue right now in Taiwan.

I could be wrong, I have never been to Taiwan, but I’ve gotten the impression that the Kuomintang ( the political party that claims China) has fallen out of favor and the current administration of the Island leans towards independence, though it is stopped so by the threat of invasion by China and uncertain support from the U.S. In addition, I think the young people of Taiwan support democracy and freedom, something that does not exist in the PRC. While the oppitiom of becomimg a SAR like Hong Kong had probably been proposed at some point, looking at the fall of Hong Kongs Democracy, I don’t think Taiwan wants that.

Taiwan may someday rejoin China, but I’m pretty sure the… Read more »

Good, in this house we support self determination.

Yes, in America, we support self-determination. But, if Florida tomorrow decides to join Cuba, there will be a bunch of dead independence seekers. You have no idea what you are talking about: self-determination is good, unless it is “in my own house.” Right? it is much more complicated than what you can understand.

Sure I’d be fine with some states seceding as long as they aren’t seceding cause they think they have a right to own other people, or other human rights abuses. I think self determination is fine if you have a different culture, different politically and socially.

Lol do you think people are against self determination of states because of the civil war or something? As long as you aren’t hurting anybody or seceding for ridiculous reasons, I have no issue with self determination

Ha-ha-ha… I will not live that long but maybe you will… there will come time when Mexico will make claims for pieces of America and let’s say New Mexico will want to succeed. Let’s see how peaceful that will be.

There will be tears….