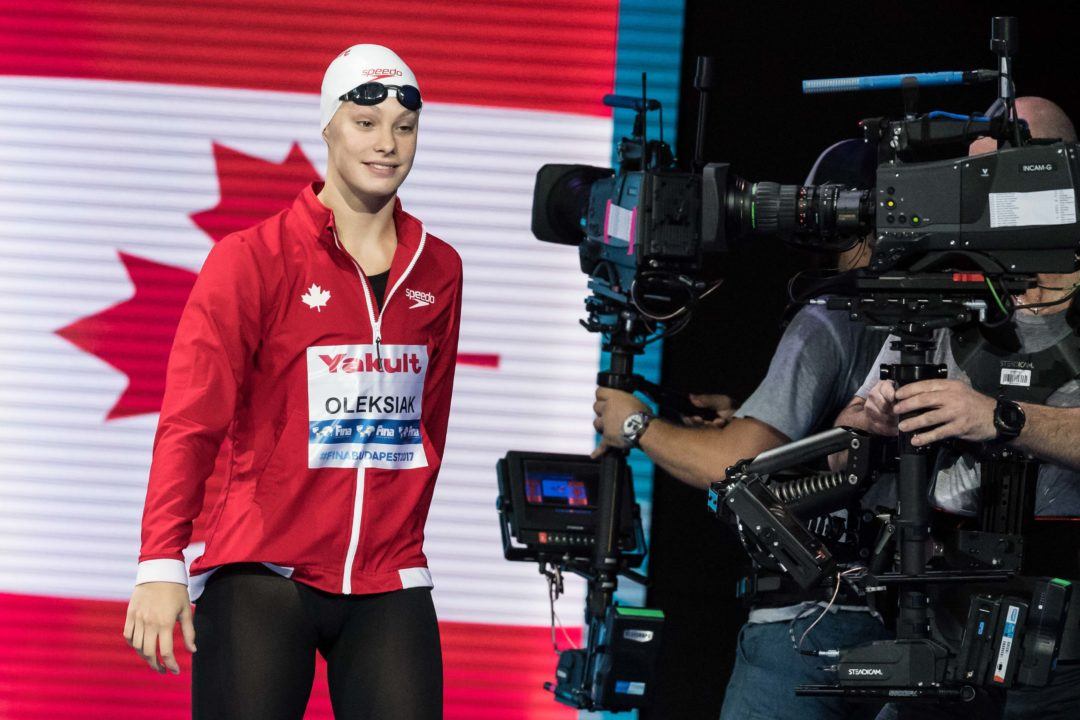 Four-time Olympic medalist Penny Oleksiak, who has made the move to Gainesville to train with the Florida Gators for the next few months, will return to her home country next weekend to compete at the Mel Zajac Mr. International meet. The competition will be held June 1-3 at the UBC Aquatic Centre in Vancouver, British Columbia.

The 17-year-old will be making the trip with her Gator training mates, as the likes of Caeleb Dressel, Ryan Lochte and Mark Szaranek are among those who are also confirmed to be in attendance.

After her performance at the Commonwealth Games wasn’t up to her lofty standards, leaving with zero individual medals, she made the move to train in Florida in order to put a solid foundation in place prior to the run up to the Pan Pacific Championships in August.

In addition to Oleksiak and some of the Gators, High Performance Centre athletes from both Vancouver and Victoria are expected to attend, which likely will include the likes of Yuri Kisil, Markus Thormeyer and Emily Overholt. Full psych sheets should be released shortly.

For a full list of teams attending, the meet schedule, and where you can buy tickets, click here.

Any possibility that she makes it her permanent home in the lead up to Tokyo? Troy’s program isn’t exactly a “few months and show a ton of improvement” kind of thing.

Just as a clarification, Pretty sure she wore a racing suit in the finals last week. I’m fairly certain the enitire gator group basically didn’t suit up in the am, then suited up in the pm.

I was there and that is true. Dressel wore a brief the entire time til Sunday finals.

Also some USA Juniors will be there too

Any chance Martyn Wilby is returning to Florida?

If she has 100% buy-in in the work they do and confidence in her training, her potential is limitless. I look forward to watching her take off in the 200 fly this summer.

I am sure she will be taken good care of in Gainesville . Wishing her all the best

Coach Troy is leaving the Gators at the end of this season so that’s why Penny is only in Gainesville till August. I bet Penny will follow Coach Troy to his new University…Im sure she will be giving a verbal commitment to Coach Troy.