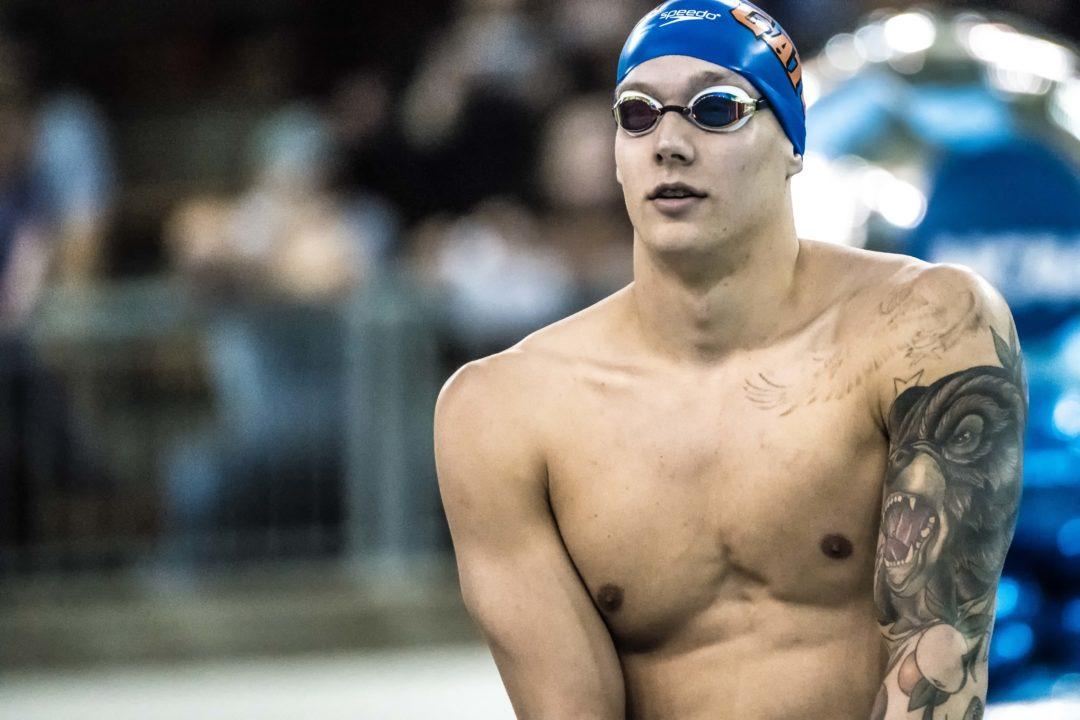 The opening night of competition at the 2018 Mel Zajac Jr. International yielded plenty of impressive swims across the board, including some from the likes of Caeleb Dressel, Ryan Lochte and Penny Oleksiak, along with a massive swim from U.S. junior team member Isabelle Stadden in the women’s 200 back.

Dressel started off his six event slate in Vancouver with a pair of wins, claiming both the 200 free and 50 fly. He was much quicker in prelims in the 200 than he was a few weeks ago at the Atlanta Classic (1:52.41), and dropped a very impressive 1:48.73 in the final for the win. That knocks his 1:51.96 season best down by over three seconds, and makes him the 4th fastest American this year.

Wearing a Mizuno race suit, Dressel trailed Florida training mate Maxime Rooney throughout the race, but blitzed home in a blazing 26.40 to beat out the 2015 National Champion. Rooney was 2nd in 1:49.84, and their teammate Mitch D’Arrigo (1:50.39) was 3rd, both missing their season bests by mere hundredths of a second.

Dressel followed that win up with another in the men’s 50 fly, dropping his prelim swim by nearly a full second in 23.69, his fastest ever at a non-Trials or championship meet. He’s now the 4th fastest American this year behind Jack Conger and Michael Andrew, who are tied at 23.37. Stephen Calkins of the University of Calgary Swim Club edged Sid Farber by .01 for 2nd, 24.51 to 24.52. Rooney won a swim-off at the beginning of the session to get into the A-final, and then placed 4th overall in 24.61.

The 15-year-old Stadden dropped a stunning 2:08.37 in the women’s 200 back final, putting her 9th in the world for the season and tops among Americans. She came into the meet with a best of 2:11.17, dropping it to 2:10.39 in prelims and then another two seconds in the final. Her U.S. junior teammate Katharine Berkoff took 2nd, also putting up two best times in one day, finishing in 2:10.55 to become the 6th fastest American in 2018.

Wearing a tech jammer does matter!

Locate is training with his COACH TROY who will require him to to the line in every part of his life, his wife and child will serve as great support also. At 36 he CAN be the fastest in the world in the 400 or 200 IM. It will make a great ending to his career in 2020! Go GATORS!

This time 7d place in RIO OLYMPICS! Lochte rockets back at top. After year-off.

Ryan Lochte made great comeback 400IM. Nearly at age 34(birthday 2nd august). 4.15 is very good time. He made three start including two 400IM per day. He do hard training only 3-4 months. Please upload many video links here. I find livestrean but no on- demand..

4th fastest American this year in the 50 fly
Issac Davis was 23.65 in March

Thanks for the correction. For some reason FINA has 23.70 as his best of the year.

Gator swimmers clearly more rested than last time. Great times overall. Sure that Dressel can much help the US 4X200 free relay in the coming years. In 2020 add Haas, Pieroni, Foster, Lasco, Callan, Kibler, Rooney, Conger and even Lochte and you have 10 strong guys for that relay.

I agree. The guy swims 14 events (or whatever the number was) fast at NCAAs and crushes a 200 IM not completely rested. He’s our best 200 guy if he wants to be.

Chalmers doesn’t care much for swimming he already stated he’s finished after Tokyo and doesn’t know who his rivals are. Dressel like lochte and Phelps has the skill set to win 200free. I’m not getting why everyone thinks he’s a 50free guy, 200Im 200free 100free and 100fly, I highly doubt he even does any ‘traditional’ 50free work. He’s just super fast and super talented, he can swim the 50 in 2028. I’m sure he’ll do it as a fun event in Tokyo as it’s at end of week. It’s the biggest risk to lose against fratus and proud when they are fresh. I think it’s easier for him to beat Kalisz / lochte / hagino in 200Im than win 50free,… Read more »

People will always be suspect until the mold is actually broken. He didn’t do any speed work for NCAAs until taper before he went 17.63. He was with the IM group all year. I think we are about to see something special in the 200 free this year.

That Us 800 relay is gonna be special this summer .

He might say he doesn’t know who his other rivals are but he is concerned about Dressel. In an interview he gave last year he said he asked Adrian how Dressel does what he does. And I’ve seen multiple other interviews of him saying that Dressel forced him to rethink his methods.

The US backstroke industry is really something special. Every year new talents are coming. This year Isabelle Stadden, Phoebe Bacon, Katharine Berkoff. In 2020 the fight for the 2 American spots in the 100/200 back will be crazy.