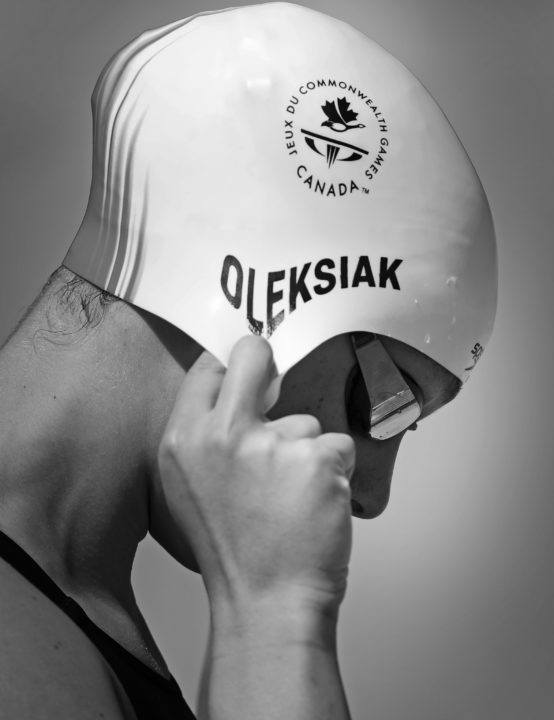 Penny Oleksiak had a pair of wins on the final night of the Mel Zajac Jr. International meet, including a new best time in the 200 fly. Archive photo via Ian MacNicol

The final session of the 2018 Mel Zajac Jr. International saw U.S. stars Caeleb Dressel and Ryan Lochte each in action in two events, but it was Canadian Penny Oleksiak who stole the show with two big victories.

In the 200 fly, Oleksiak was aggressive opening up, establishing a big lead early and turning in 1:01.76 at the 100. She held strong coming back, and touched in 2:09.96 to drop over a second off her previous best done recently at the Atlanta Classic (2:11.22). 15-year-old Canadian junior teamer Bailey Herbert was 2nd in 2:14.93, dropping nearly three seconds for yet another best time.

The 100 free was the next event, and despite swimming out in lane 0, Oleksiak was not fazed. She flipped just behind U.S. junior Gretchen Walsh at the 50, and charged home in 27.95 to win by over a second in 54.50. While her season best was done with a full taper at the Commonwealth Games (53.85), the time is much better than the 55.11 she was at the Atlanta Classic.

In search of a perfect 6-for-6 meet, Dressel fell just shy in his final race of the competition. However, he did start the night out with a big performance, chopping almost a full second off his PB from prelims in the 50 breast in 27.89. Liam Johnston (29.21) scored a best time himself for 2nd, and Jake Foster (29.42) was 3rd, as Dressel is now the 5th fastest American this season.

The 33-year-old Lochte won his third event of the meet in the next event, the men’s 100 back, clocking 54.75 for his fastest performance since 2014. Clark Beach was 2nd in 55.65, and Thormeyer, fresh off his win in the 100 free, was faster than Lochte (54.49) to win the B-final. That swim is his 3rd fastest ever, trailing only his semi-final and final performances from the Commonwealth Games in April.

I’m not gonna lie, this meet is the first in a while that has given me some hope for Oleksiak’s future. I wonder if she’s considering adding the 200 fly to her international lineup? Either way, I hope she can get back to her best form in the future.

This was her final age group eligible meet… Canada keeps records for 15-17 & she turns 18 before day 1 of the Sanata Clara meet.

I think it really has to do with joining the Florida training group. Pure speculation (as I have no idea what exactly her practices are) but as I commented in an earlier article, I think she is just one of those “sprinters” that really needs meters under their belt in order to perform; then a huge taper for wicked fast times. I mean, unless your a 50 specialist, you really need to have endurance for that awful back-half lactate. Look at Katinka Hosszu – her 100 back (being her ‘sprint’) is based on her natural speed and endurance from training for the 400/200 IM. You can be a top 100m swimmer without being a 50m specialist.

I think the same that you.
I had already commented on other notes, she is not getting good times, for more than a year that her times are far from the goal, I do not know, she has not been able to break her own records, improve her times, on the contrary. For me, she was wrong to return to TSC, she should look for a coach more dedicated to her and not to a group.

I think she is very good, but after winning 4 Olympic medals, the expectations are too high, the success, the fame, the publicity, the photo sections, money, etc. she changed her life completely, when she won at age 16, 4 Olympic medals

That’s not exactly what I was saying. Her meterage was probably quite high as a 15 year old leading up to Olympic trials in 2016, then her switch to HPC Ont would basically have been a Macro-scale taper; hence her immense success at Rio (she had the fitness from previous years training and then the sprint fine tuning from HPC-Ont). I think the Florida training group will largely recreate this. For clarity, I am not hating on the HPC-Ont training; it’s clearly done wonders for the girls that train out of there. Simply, one style of training doesn’t fit all and Penny’s is seemingly one that requires a strong endurance prior to sprint-fine tuning/power training.

I totally agree with you on this: “Simply, one style of training doesn’t fit all “…. For me, that phrase is the key.
She has switched from HPC-Ont to TSC and now Florida (I read that she will train for a couple of months in Florida to prepare for Canadian Trials and Pan Pacific Championship) …
She needs to find a coach and a style of training that will get her on the podium and break her own records in important international competitions.
My opinion: She needs a coach that is not from home (Canada)

Someone who has four Olympic medals including a gold in the blue ribbon event of swimming – the 100m free – has their legacy assured and nothing to prove to anyone. She could retire tomorrow with more accolades than all but the top 1% of elite swimmers. The fact that Penny went to a program with training partners and coaches that will take you to the well every day and requires 100% buy-in for success says she’s still hungry and believes in herself. Being able to pull a double like that 200 fly/100 free with virtually no time in between shows that what she’s doing is working. I personally believe her best shot at standing on the top of the… Read more »

Do not get me wrong, I believe that Penny is the best Canadian swimmer and that in the future she will continue to be.

Only 2 years have passed since Rio 2016, she is doing the same times as she was almost 3 years ago.

But she has made bad decisions, which have harmed her performance in the pool.

She return to TSC, so that she can fulfill all her activities and the results have not been good in the pool.

For heavens sake stop stalking her . Let her ,be .

Can’t wait for Canadian Pan Pac trials, Canadian Junior champs, Pan Pacs, and Junior Pan Pacs. Oleksiak is going to feel like a veteran in a couple years if all these kids continue to improve. I think Herbert PB’d at least 5 or 6 times this meet

Not to mention how Canada’s older swimmers are retiring at a rapid rate.

TYR just fell out of the race for Dressel…

not that they had any chance.

I’m gonna bet he picks either speedo or Mizuno