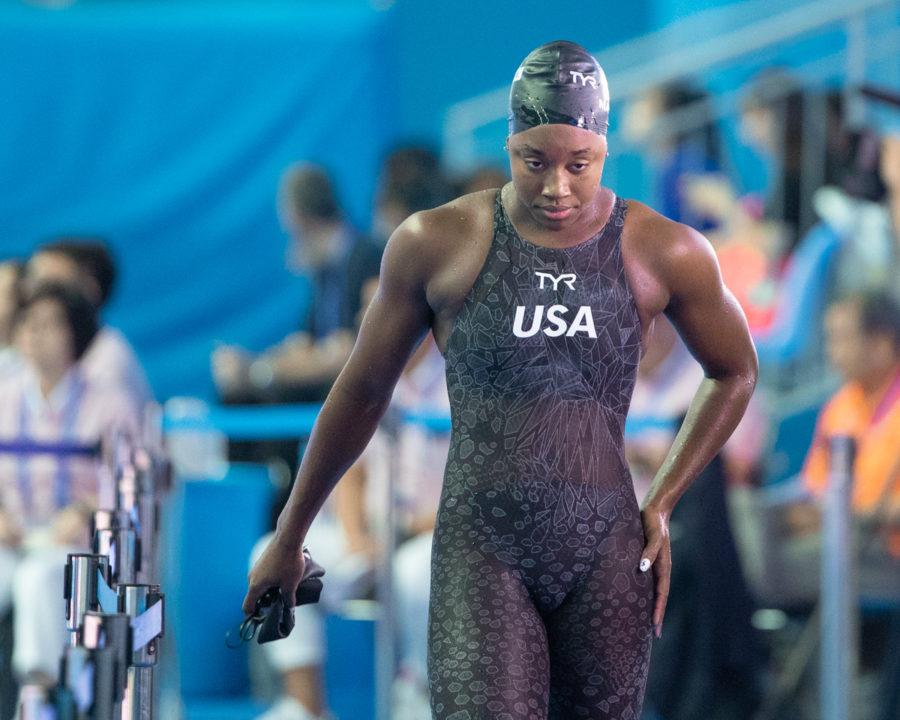 With sprinters Abbey Weitzeil and Olivia Smoliga stepping up, Simone Manuel needs to drop at least a second to defend her Olympic gold in Tokyo. Archive photo via “Rafael/Domeyko Photography”

We’re back with some overreactions to all of the action that took place during day 5 prelims at the 2021 US Olympic Trials, including the biggest storyline of the day: can Simone Manuel make the team in the 100 freestyle?

Manuel, the defending World and Olympic champion, was only 6th this morning with her time of 54.47 coming in well over her American record of 52.04. During her race, Manuel was fairly long in her strokes, which may indicate that she has room left in the tank to improve tonight.

However, with Stanford’s swimmers underperforming at these trials, it’s hard to tell exactly where Manuel stands. Despite this, we all know that Manuel needs to be significantly faster to earn a chance to defend her Olympic title: several American women have already been under 54 this season.

Weitzeil and Smoliga Showing Their Cards

On the flip side of Manuel’s situation, American record holder Abbey Weitzeil appears to be on form. The 2016 Trials Champion swam a time of 53.52 this morning, nearly matching her time from 2016 (53.28) to take the top spot for the semi-finals.

After narrowly missing out on an individual berth in the 100 backstroke, Olivia Smoliga swam a best time this morning in the 100 freestyle to qualify second in 54.00. Smoliga was out fast, flipping first at the 50 meter mark before fading down the stretch. If she can replicate her performance, she’s in a good position to make the 4×100 freestyle relay for Tokyo.

Coming into Trials, one of the biggest questions of the meet was if Ryan Lochte would make it to his 5th Olympic Games. On day 2, that seemed bleak, as Lochte missed the semi-finals in the 200 meter freestyle by placing 25th overall.

This morning, however, Lochte placed 2nd overall in the 200 IM, putting himself in the position to make the team. His time of 1:58.48 was only a half second shy of the time he swam in prelims back in 2016, when Lochte ultimately took 2nd overall in finals behind Michael Phelps.

At the 2021 NCAA Championships, Destin Lasco was a breakout star, giving Texas A&M’s Shaine Casas a run for his money in the backstroke events. During the meet, Lasco also became the 3rd fastest performer in history in the 200 yard backstroke with his time of 1:35.99, only trailing Casas and Ryan Murphy.

Despite his short course performances, Lasco had yet to back up his times in the long course pool. His best time in the long course 200 backstroke only stood at 2:00.91 entering trials, which didn’t even exceed the wave II cut time. However, Lasco demolished that standard this morning, swimming a time of 1:56.88 to chop over 4 seconds off of his personal best and take the top seed out of prelims.

Although Ryan Murphy is still the favorite to claim first place in the final, Lasco put himself in contention for a roster spot, especially considering Casas was only 1:59 this morning.

After losing out on making the team in the 100 backstroke, Shaine Casas dramatically underperformed in the prelims of the 200 backstroke, only placing 9th overall.

Casas relies heavily upon confidence in his swimming, and it is clear that the 100 backstroke miss disrupted his momentum. Can Casas get back on track during the semi-finals to move himself back into contention?

Good luck to Ryan Lochte, he’s one of my favorite swimmers! Go Lochte!

If the Women freestylers don’t step up, then it looks like the W4x100m Freestyle relay is going to be a cakewalk for the Aussies and the US Team will be in the fight for the minor medals.

Australia too deep. Realistically going to need a swimmer capable of 52.0 or faster and 3 more under 53 to win that relay. And that would still rely on the Australians being a little off.

Their perfect relay performance would be a 3:28 or perhaps even faster.

What the heck is up with Vanessa Pearl’s performances? Is she okay?

We are reading too much into prelims

Its what we do. Manuel in trouble. Heck the whole relay is in trouble if the ladies can’t break 53/