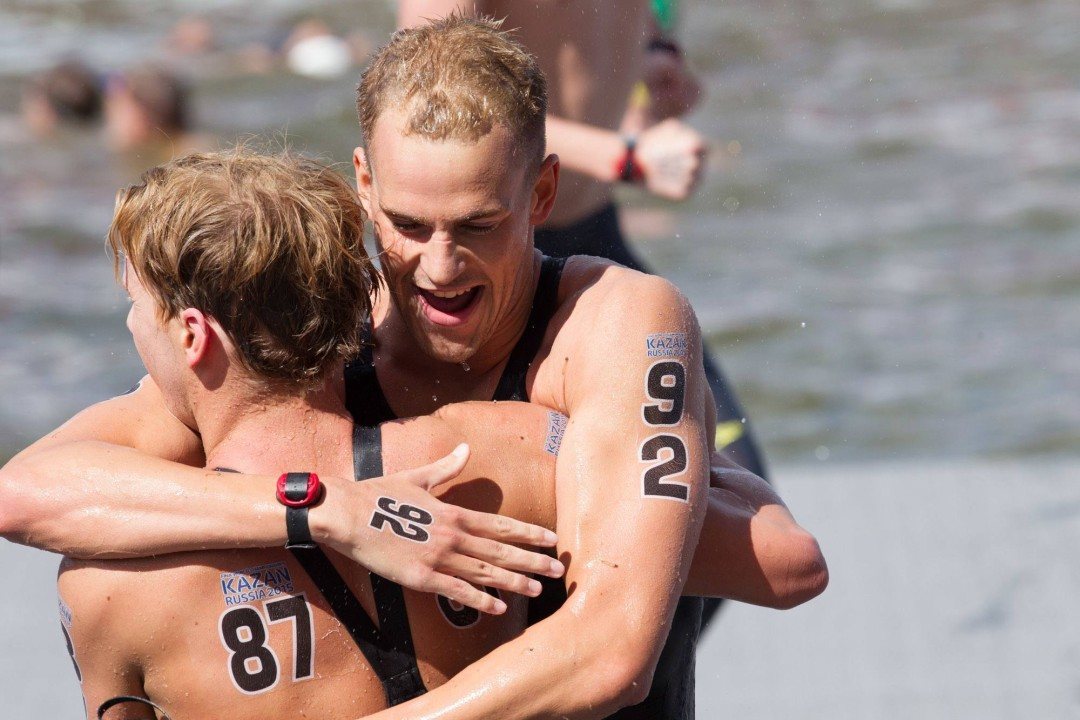 Olympic dreams were made and ended on Monday on the banks of the Kazanka River. Current photo via Tim Binning/TheSwimPictures.com

For 10 male open water swimmers on Monday afternoon, there is jubilation. A year out from the 2016 Summer Olympic Games, the top 10 finishers from Monday’s men’s open water 10km races in Kazan, Russia have qualified through to the Olympic Games without any more hand wringing or anxious waiting.

The news is especially exciting for the United States and Italy, who have each qualified as many swimmers (two) through to Rio as is possible, through the only manner by which it is possible: by placing two swimmers into the top 10 at these World Championships.

While for these 10 and their federations there is jubilation, for dozens more from their nation, the result is heartbreak. While nationalism and often personal friendship will have them applauding their compatriots, other swimmers from the 8 nations listed above have had their hearts broken.

That’s because now any other male swimmer from those nations already qualified have had their Olympic hopes dashed a year out, and approach a fork a year earlier than most swimmers do. While every four years, all swimmers have to decide if they’re willing to put in the work it takes to compete at a peak level for so long in hopes of chasing the ultimate Olympic dream, or if the time prepare for their life after competition has come. For open water swimmers from the above countries, they now have to peer even deeper into their crystal balls, and look a 5th year out to see if the professional opportunities can sustain them for even longer.

American, Dutch, Greek, British, French, Italian, Brazilian and Canadian male open water swimmers are set. That includes the young American upstart Jordan Wilimovsky, trained at Northwestern in Chicago but a rare early-life open water trainee from California. The win came perhaps on the willing aggressiveness of youth to go for gold rather than simply settle for the top 10 as many declared their intention to do before the race. He and Sean Ryan were unofficially declared on Monday as the first qualified and accepted members of the 2016 U.S. Olympic Team.

Also qualified through is the defending 3rd and 4th place finishers from the 2012 Olympic Games: Richard Weinberger and Spyridon Gianniotis. With the retirement of Germany’s Thomas Lurz, those two take over among the elder statesmen in the still young, but growing, sport of open water.

Among those disqualified already from Worlds contention is Daniel Fogg, who was 5th in 2012 but placed just 14th on Monday in Kazaan, leaving him out as a result of the success of his countrymate Burnell. Fogg is now 27 years old, and would be well into his 30’s by the time Tokyo rolls around in 2020, and while open water swimmers have frequently shown the ability to train later than other swimmers, Fogg’s career has been somewhat of a roller-coaster ride that he may be ready to disembark upon.

Then there’s a pile of swimmers in limbo, who will travel to Setubal, Portugal next year with the hopes of grabbing one of the 15 remaining spots at the Olympic Games. The silver lining for those in the middle is that the Brazilian Allan do Carmo took a position in the top 10 at Worlds. As the host nation, Brazil is guaranteed at least one spot for the Games, whether that spot is earned in the traditional sense or awarded otherwise.

Among those left to pick up the pieces and try again next year are Tunisian Ous Mellouli, who won the Olympic gold medal in 2012 to much fanfare in his recently revolted home nation. That medal in 2012 was a small surprise given his lack of open water experience (though his pool resume is thick).

He finished 23rd on Monday, two minutes behind the winner, but there will still be confidence as he had to take the ‘hard way’ to London three years ago.

In fact, none of the non-qualifiers should be overly concerned, as those coming through Setubal that year had great success on the Olympic stage.

Others battling for those spots include German veteran Andreas Waschburger (16th). With Lurz no longer in the picture, it’s left to him to pick up the slack in a powerful German open water unit. Neither the Germans or the Russians, each of whom had two swimmers in the top 8 finishers of the 10k in London, have anybody qualified yet.

Also missing a spot so far, but still eligible, was South African Chad Ho, who won the 5k two days earlier. He was 19th in the 10k, and never really was able to earn enough engagement with the lead pack in the longer race.

In fact, very few of the high finishers from the 5K performed as well in the 10K. To be specific, not a single of the top 10 qualifiers above even raced the warmup 5K. A statistic to be wary of in future years.

Also awaiting a spot in Rio is Hungarian Gergely Gyurta, who is a relative novice in open water. He led the vast majority of Tuesday’s race, but faded well back to 17th by the finish. He’ll likely qualify for Hungary in either the pool or open water, whichever he chooses, or both, but if he continues to seek a spot in the 10k, more experience will benefit him. Perhaps the course in Setubal, which is 6 laps instead of 3, will benefit him, as it would allow a further three potential interactions with his coaches at the feed station as he passes each lap.

Monday for the men, as Tuesday will be for the women, will be a trying day for emotions. The system comes with the balance of desire for victory with need for a top 10 finish and attainment of the Olympic dream. The joy for teammates and the sorrow for self, with a dash of hope for redemption mixed in.

May the currents be ever in your favor.

If there were a star system to rate SwimSwam articles, like on Trip Adviser, this one would get 5 Stars. Very informative.

The way I read this is that the USA and Italy have 2 swimmers qualified, but there can not be a second swimmer from the other 6 countries who had someone in the top 10. Yet there is another qualifying race next year where 15 more swimmers can qualify, but they have to be from different countries than the 6 with one swimmer already qualified. That doesn’t quite seem fair. What is the rationale for this? Is 10K the only Olympic Open Water event?

CT swim fan. You have read it correctly; the 6 other nations with a top 10 finisher cannot now have another swimmer qualify. And yes, the 10km is the only Olympic event.

Nope CT, but you are close. Top nine in Portugal race make it, but not more than one per country not yet qualified. Plus 5 designated continental champions (can not be from a nation already qualified). Plus one freebee for host country (Brazil).

The free one of Brazil does not add up to the one obtained on the race.. so, if a Brazilian is on top 10.. that is the only spot.. on women race if Brazil wants 2, both will need to be top 10.

CT Swim Fan, don’t try to figure out the FINA math. It never makes any sense.

Congrats to Wilimovsky and Ryan. Those two guys must be over the moon excited today and they deserve it. Two Olympic ring tatoos are on the come now!