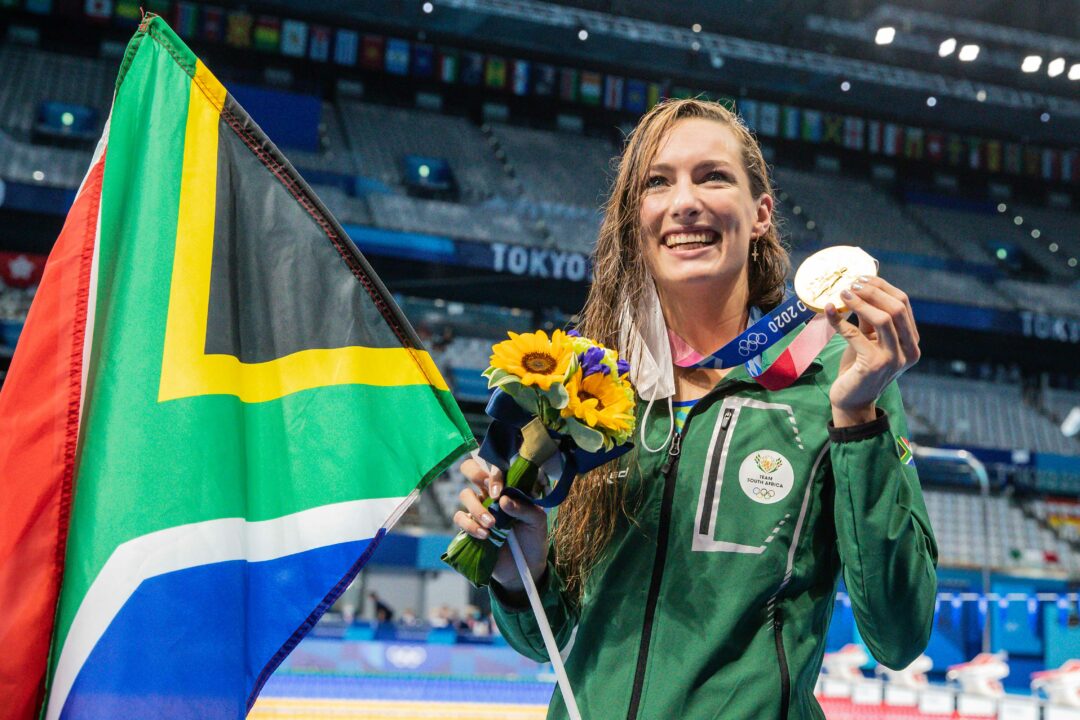 South Africa’s Tatjana Schoenmaker set the Olympic pool on fire when she not only topped the women’s 200m breast podium but she did it in a World Record-setting performance.

The 24-year-old stopped the clock in a massive 2:18.95, with her emotional in-pool celebration making many a media outlet’s top highlights reel for the entire Games. She also nabbed 100m breaststroke silver making her a two-time medal winner.

When all was said and done in Tokyo, Schoenmaker represented just one of two medalists in total at these Games hailing from South Africa, with the other being that of Bianca Buitendag in surfing.

However, their Olympic dreams of having won an Olympic medal were met with a somber reality check upon returning home, as the South African Sports Confederation and Olympic Committee (SASCOC) confirms they are likely unable to pay out Olympic medal bonuses.

SASCOC President Barry Hendricks told South Africa’s EWN that the inability to pay is due to budget constraints.

“We still have the Paralympic Games coming up and the Commonwealth Games next year. We are in a tight financial position and the truth is we cannot afford to pay them R500,000. We do not want to create a dangerous precedence with the Paralympics around the corner.

“We do not want to be irresponsible when it comes to incentive issues. We will give them something small and hope the government helps in that regard.

“If we give R500,000 to the Olympians we have to use the same measure for the Paralympians. Imagine if they get 30 medals, we would be in serious trouble because we do not have money reserved for that. We are looking into the possibility of rewarding our two Olympic medalists, and it is not true that we will not reward them. The amount will be much smaller than in 2016.” (Sowetan Live)

Hendricks continued, “SASCOC cannot place unrealistic expectations on its athletes when we know full well that we can’t compete with the likes of Great Britain. Great Britain receives £350 million over a four-year cycle in preparation for the Olympics. SASCOC receives R28 million over four years.” (Capetown, Etc.)

“We used to receive a lot of money from the government for funding. We are now getting R5m annually, and it affected our Operation Excellence programme. We cannot afford to pay or give our athletes the best medical treatment, send them to Europe or support their Olympic preparations. I did not set a target and told them to go and achieve to the best of their ability, and we are proud of them. They achieved given the Covid-19 pandemic challenges and lack of funding,” explained Hendricks.

We’ve documented how many nations payout Olympic medal bonuses in the form of cash, luxury gifts, and even postponement of required military service. You can see our post on this subject in more detail here.

But both operational and monetary issues have plagued the SASCOC for some time. Whether it be these having to self-fund their own trips to elite international competitions or dismissing international staff due to sexual harassment allegations.

You can refresh yourself on just a sampling of SASCOC-related issues using these links:

While the SASCOC pursues other monetary options for the 2020 Olympic Games medalists, South African business leaders are trying to take matters into their own hands.

Carel Nolte, CMO of Easy Equities and Mike Sharman, founder of Matchkit, started a crowdfunding campaign, encouraging other entities to contribute to the two athletes’ bonuses. To date, the fund has raised about $2,000 USD.

This funding issue comes at a time when newly-elected FINA President Husain al-Musalla told the AP of Africa’s podium prospects in Paris 2024, “I believe there will be a lot of athletes coming from Africa in swimming and they will reach the podium.

“When you give opportunity to everybody they perform. Africans have a lack of resources, especially for aquatic sport.” FINA plans on spending $29 million over four years ‘on a strategy to widen and deepen swimming’s talent pool’ on the continent. (AP)

A great effort deserves something

The real tragedy is the governing bodies that disperse millions to ceo, and board members of that body. Yet, a medalist gets a anemic amount. Not only RSA, but also looking at you USOC, IOC, FINA, and USA Swimming. Look now at someone like Lydia Jacoby. Someone who will make nothing to keep her amateur status to still compete on the high school level, and head to college. Also Ledecky, King, and Franklin did the same thing. Luckily when Jacoby gets to college, she can make money on her name, and image.

Per Mike Sharaman update from 2 hours ago crowdfunding total for two athletes reached 320,000 rands or approximately $21,824.23. The organizers plan on keeping crowdfunding going thru end of August.

The South African Sports Confederation and Olympic Committee is as corrupt as they come and the the swimming side branch is even worse. All SA cronies that take large salaries and have no interest in the sport. Private industry once again will have to take over.

Banana Republic – Get out of there !

in my eyes, a gold medal is more valuable than a super bowl ring, stanley cup, main event payout in boxing etc. I believe all of them should receive well into the 6 figure payouts. The amount of blood sweat and tears that swimmers put into arguably the most physically and mentally taxing sport deserves a large payout at the highest level.

BS that they cant scratch together a few hundred k $ for some medals. On the other hand, its probably not life changing money for the athletes if they can market themselves. Maybe represent Qatar next time.

Qatar or Bahrain would probably add her to their stable of bought athletes np.

Might get hate for this, but Paralympians do not deserve equal payouts that Olympians do, as the Olympics brings in waaaaay more revenue than the Paralympics do