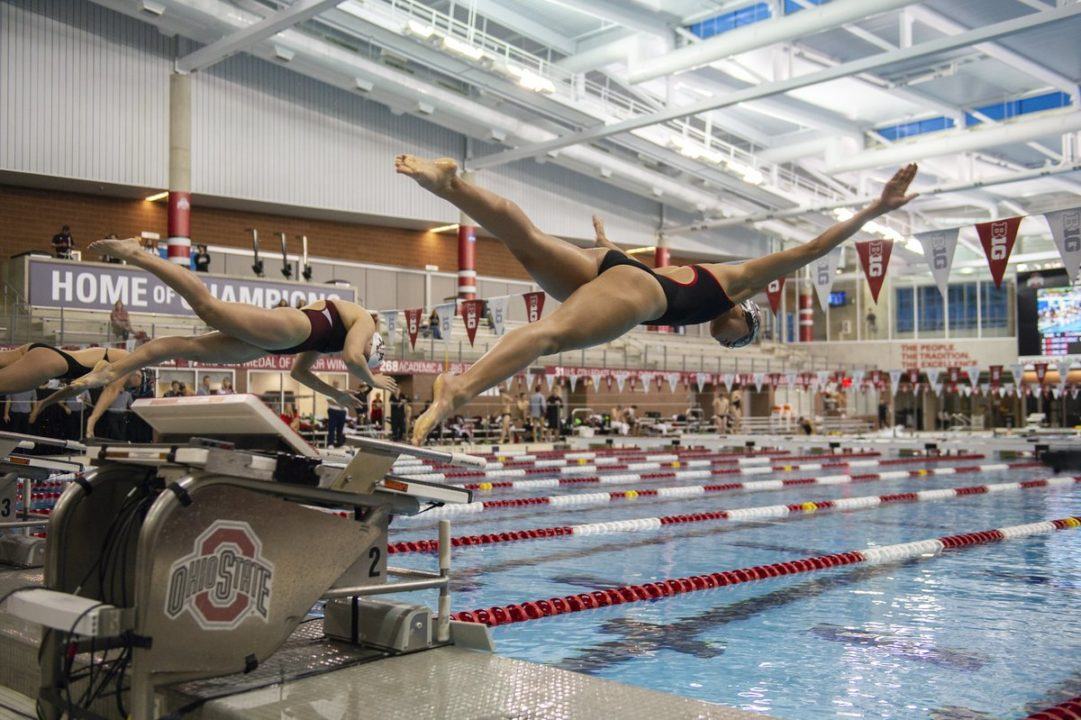 Events like 75's and 175's of stroke were contested at the meet. Archive photo via Ohio State Athletics

DI Ohio State and DIII Kenyon took a twist on a traditional dual meet, combining their teams and then splitting into two mixed-program teams. Thus were born Scarlet & White and Purple & Gray in an exhibition meet on Friday, while some of OSU’s stars were busy preparing for the ACC/B1G Challenge in West Lafayette. Purple & Gray emerged victorious by the end of the meet on both the men’s and women’s sides.

Two OSU men broke 20.0 on relay splits in the 200 medley relay. Brothers Mossimo and Teo Chavez, a senior and a sophomore, respectively, were 19.57 and 19.87 on anchor legs. Other impressive splits came from Ben Sugar, who was 20.99 fly, and Rj Kondalski and Colin McDermott, who were 22.27 and 22.17, respectively, on backstroke lead offs.

What a joke. Kenyon can’t even compete anymore so OSU offers them an exhibition meet. Wow…

Pretty sure even the best ever D3 team couldn’t compete with Ohio State, but sure go ahead and bash a great D3 program with decades of wonderful contributions to the swimming world if it makes you feel better about the team you support.

Former great D3 program. It’s been run into the ground by their current coaching staff.

Oof. Tough crowd. That’s like LSU football type of pressure…Kenyon men have won 3 NCAA titles, finished 2nd twice, and were 3rd once in his 6 seasons as head coach. Kenyon women have been runner-up 3 times, including last year.

Note that they didn’t win the title in either of the 2 seasons before he took over on either the men’s or women’s side.

You’re going to have to give a little more of a description of “run into the ground” to convince me. All evidence points to this being a personal beef.