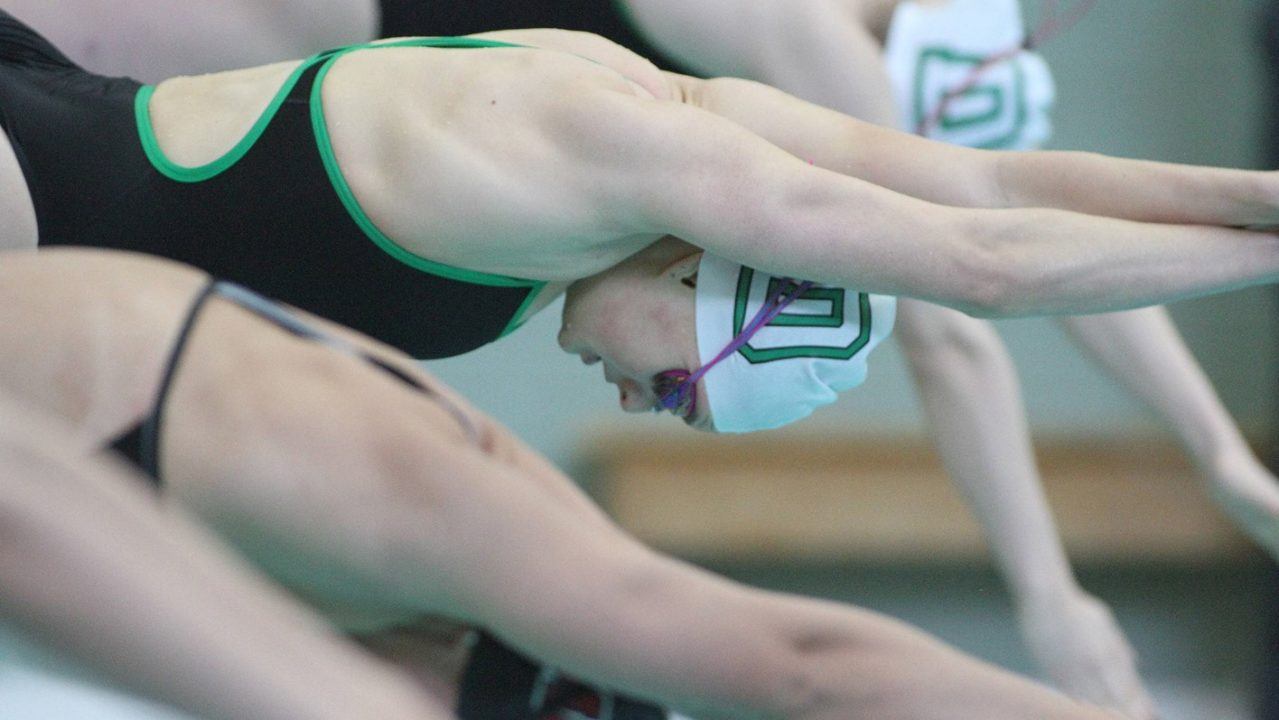 Swimming is most exciting during a close race with something on the line. It’s is a sport about racing. Beating... Current photo via Dartmouth Athletics

The Dartmouth women’s win over Cornell as a part of their double dual with Harvard was their first Ivy League win since 2012 (also a win over Cornell). As the tight score suggests, this win wasn’t easy. Dartmouth needed a win in the final relay to take the meet and after two swimmers, they found themselves 2.03 behind. Freshman Zoe Wortzman split a 52.13 to bring the gap under a second, and fellow freshman Mia Leko anchored in a 51.88 to complete the come back. Dartmouth won the relay by .32.

Cornell enjoyed a 28-10 advantage in diving points, but that was offset by Dartmouth outscoring them 26-8 in the relays.

Early in the meet, it looked like Dartmouth might run away with it. They won 4 of the first 6 events and after the 200 fly held a 70-42 advantage. However, Cornell won the next 4 events to take a 95-93 lead after the 200 back. It was back and forth the rest of the way.

The meet was decided before the final relay, but with a 10 point margin flipping any single event win by Loyola to Fairfield would’ve resulted in a tie. That makes Megan Dickey’s .21 win in the 100 free and Devin Cronin’s relatively narrow in in the 100 back appear extra important.

The most exciting race of the night was the meet opening medley relay where Fairfield anchor Maria Nitti dove in .95 behind and outsplit Loyola anchor Dickey by .99 to win the relay by .04.

This meet was contested at Fairfield, so, in a novelty for NCAA swimming, it was short course meters. Because of the meters format, the swimmers competed the 1500 and 400 free instead of the usual 1650 and 500.

If the novelty of the meters Loyola/Fairfield meet wasn’t enough for you, Niagara went international, hosting a dual meet with Canadian University of Waterloo. The meet has been a pretty exciting rivalry the last few years. 3 of the last 5 contests between the men’s teams have been decided by 5 or fewer points, and this year lived up to that standard. The Niagara men prevailed by 5 points.

Niagara led through most of the meet, trailing only once after the 1000 free. Their largest lead was 19 after the 200 IM with 6 events remaining. Waterloo won 3 of the next 4 events to close the deficit to 3 (86-83) with only the 100 breast and 200 free relay remaining. Niagara made sure the final relay didn’t matter by finishing 1-2-4 in the breast to open a daunting 14 point lead.

Niagara were led by 2 wins from Dominykas Intas in the 50 and 100 free.

The women’s meet went to the Canadians. This meet was back and forth early. With 4 events to go Niagara held a 66-63 lead. Waterloo then won the 100 back, 500 free, and 100 breast to open up a 100-85 lead with only the relay remaining. Niagara won the relay to make the final margin close.

If a meters meet and an international dual meet still weren’t enough unconventional formats for you, the Big 10 and ACC had an all-star meet and it turned out to be an extremely competitive team competition (for the men at least, the Big 10 women won 251-102). We covered this meet extensively (it was super fast, Maggie MacNeil is pretty good). If you want event by event breakdowns check out out day 1 live recap  and our day 2 live recap.

One thing I will use this space to point out is the odd way this meet was scored. The meet was structured as a dual meet between the two conferences using standard 9-4-3-2-1 scoring in individual events. In a normal dual meet, teams are allowed to score points with only their top 3 swimmers. However, in this meet, they were allow to score with their top 4. Not really a big deal. The odd part was that they switched back to the standard rule of allowing only 3 swimmers to score for the second day.

Perhaps with the B1G/ACC scoring system, they were testing out the best option? This may become an annual event from now on?

I love these articles!