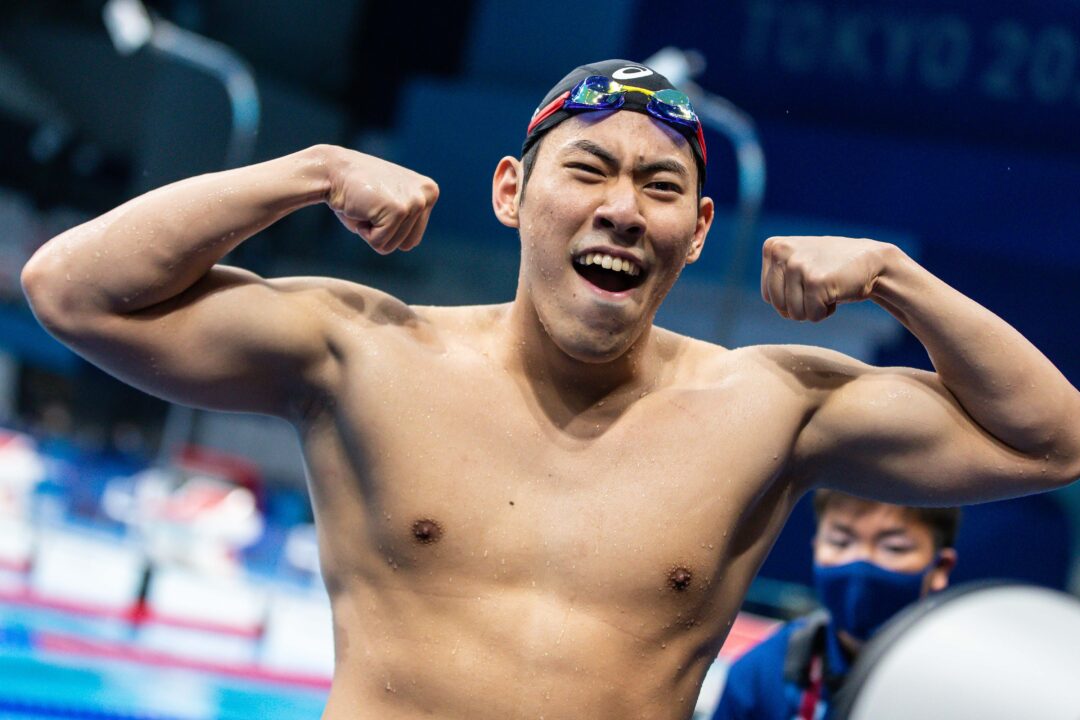 Tomoru Honda broke the World Record while swimming against the former World Record holder - which it turns out, is not that rare. Archive photo via Jack Spitser/Spitser Photography

World Records generate a ton of interest, and with that interest comes a ton of data. Below, we’ve compiled some of the most interesting ways to look at the result and what it means for swimming and Honda.

When Honda set his surprise World Record on Saturday in Tokyo, the primary difference-maker was his back-half splitting.

This is not dissimilar from the approach that we’ve seen from the long course World Record holder, Kristof Milak of Hungary, who has used back-half swimming to leave Michael Phelps’ World Record in the event in the dust.

What’s interesting is that this is actually against the run of play for how the most recent 200 meter male World Record holders have set their standards. Three other 200 meter World Records have been broken in the last decade:

The older World Records, mostly from the 2009 polyurethane supersuit era, were more like the current ones – back-half swims. That is most likely an impact of those polyurethane suits, which were widely considered to provide most of their benefit at the end of a race. When Aaron Peirsol went 1:51.92 at the 2009 World Championships in the 200 LCM backstroke, for example, he was a second faster over the last 100 meters than Ryan Lochte’s 2008 World Record. Lochte never got the World Record back again, but he continued to drop his back-half results in the post-suit era.

Honda is a good closer in the 200 fly in long course as well – though next to Milak, everyone’s back-half looks slow.

The question that remains to be answered has four possibilities: have the 200 butterfliers figured something out that the 200 breaststrokers and 200 backstrokers haven’t? Is Honda reacting to Milak’s closing speed by developing his own? Is the 200 fly a different 200 meter event than the other 200 meter events?

Or is the difference more benign – just the coincidence of two swimmers with a preference for back-half racing?

Below is a list of all current World Record holders who took the record away from the former record holder in the same race. When a swimmer has broken the record multiple times in a row, we’ve gone back to the last time the swimmer broke someone else’s record.

A few notes of note:

In short course, the breakdown of the types of meets that short course World Records have been set in :

The swim by Honda is the 57th World Record that was set in Tokyo, the third-most of any city in the world. 10 of those World Records have been in butterfly races.

While more World Records have been broken in the US than in any other country, LA is the only city in the top 9 in part because the US has split its major meets among a ton of different cities in history. That’s as compared to, say, Japan, where Tokyo has hosted almost every important meet ever held in the country.

Only a handful of men have held the 200 fly World Record holder in short course, and a surprising number of them have been quite young.

Honda broke his record 1 day older than Franck Esposito of France was when he set the record for the first time. Esposito broke the record two more times in his career, including a whopping 11 years later, where he became the oldest man to set it.

Of the 17 World Record performances in the event, 10 have been done by swimmers aged 22-or-younger.

It would be nice to have a comparison of average age of world record setters in all races. My guess is that the 400 free would come up as another young swimmers’ race.

have the 200 butterfliers figured something out that the 200 breaststrokers and 200 backstrokers haven’t?

It feels odd to include the 200 BR here. The two best performers in LCM (ZSC and Chupkhov) both have monstrous back halves.

It does appear that for 200 back the trend is towards faster front halves. Rylov, Murphy etc all take it out faster than Lochte, Clary, Irie did 10+ years ago. Larkin’s SCM WR has a frankly mind-boggling first 100 and he somehow holds it together down the second half.

Re age, the LCM 200 fly WR holders have all trended pretty young too. In fact, the only ones to break the record older than 22 are Malchow and Phelps (x2).