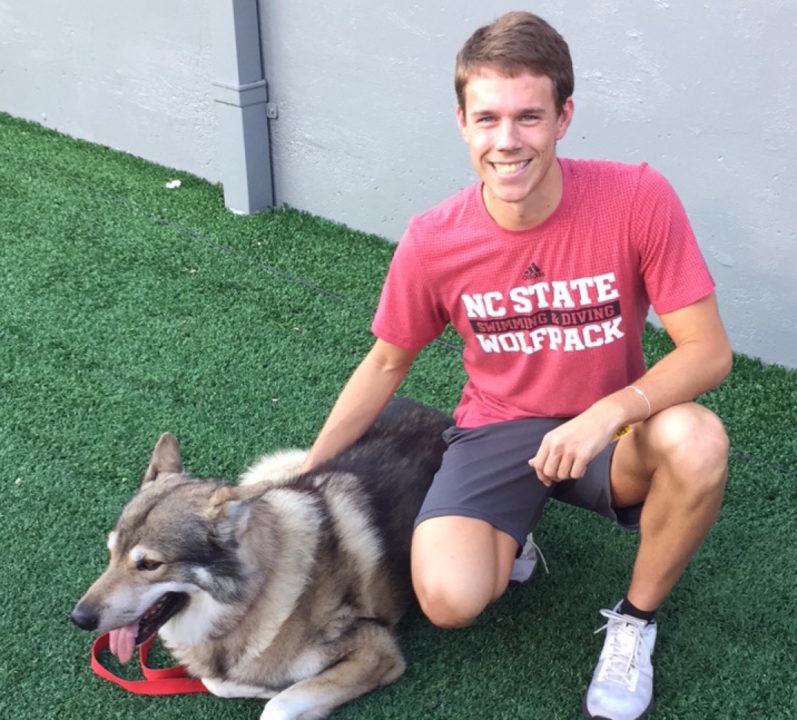 ACC Championship finalist Noah Hensley will be transferring from FSU to NC State this January 2017. He will be eligible to compete for the Wolfpack in January 2018. Current photo via Noah Hensley

The rich get richer: Noah Hensley has announced that he will be transferring from Florida State to NC State. Hensley competed for FSU during the 2015-2016 season as a freshman where he joined his older brother, Cole Hensley (who has since graduated), as a member of the men’s swimming program. Hensley is a native of Winter Park, Florida, and will be venturing north to Raleigh, North Carolina to NC State beginning this spring. Hensley will be eligible to compete for the Wolfpack in January 2018, and he will be a junior (having lost one year of eligibility after his in-conference transfer).

Hensley is a great pick-up for NC State, which has been on a recruiting tear. It recently announced that it has already filled its Class of 2021 roster with 7 commits. In addition, the Wolfpack has recently gained another big transfer in freestyler/breaststroker Jacob Molacek, who will also join the team as a junior.

Hensley is a welcomed addition to the Wolfpack because he can swim three of the four strokes competitively, and has been successful at both sprint and middle distances. While at FSU, his time drops came in backstroke and butterfly. At the 2016 ACC Championships Hensley led off the 200 Medley Relay that scored 5th (he split 21.76 in the 50 back). Individually, at that same meet, he got 6th in the 100 back, 24th in the 100 fly and 24th in the 200 back. His best times and the years in which he swam them are outlined below:

* = times achieved during his freshman year at FSU

Subscribe
16 Comments
newest
oldest most voted
Inline Feedbacks
View all comments
Is it just me....

Coach Dudd….really? When is the 8th grade dance?

It’s a year from when classes start. Think it is very fair. Schools are there for an education and if you are good at sports, then you get some of your schooling paid for, definitely fair. If you are only going to the school for the sport, then why bother with school at all. Just go pro. Athlete signed to a commitment to the school and there are a lot of people and companies that are footing the bill for you to be at school. Same thing happens with high school swim as well, when schools are changed. Wishing him the best in his junior year.

Smart move, I have little faith in his former institution’s coaching staff to get the job done at the ACC level, much less the NCAA level

The amount of verbals NC State has received this early is almost comical at this point. Congrats to a great program!

Yes, super kid. The hardest worker on the team. Perfect person to build a new program around. But, Coach Dudd screwed that up.

Find it interesting the transition of Studd to FSU. Seems that at least 4-5 swimmers have left the program after the firing of Bradley. Would like to know if the men didn’t like the new assistants coming in. I know Studd had success with FGCU women, but maybe he’s leaving it up to the assistants and some of the guys said, ‘no way’.

I think he is going for quantity in swimmers NOT quality!

January 18, that’s a year and a half not a year, can’t compete in the fall? That’s harsh.

I feel like there should be a waiver on sitting out a year for athletes on teams where the head coach has changed.

This discussion continues to come up – BUT – this is why it’s important that collegiate athletes understand the school is offering the monetary incentive to represent the school, not the coach. When it comes to “in conference” transfers, student athletes are out for a year of eligibility, but if he had chosen a Division II or III school, or even a school in another conference, there’s a chance he could have been able to come back this year. It’s important they choose the SCHOOL over the COACH (like in Hensley’s case). Nothing is guaranteed when it comes to the coaching carousel.

Most of the athletics go to a specific school because of a coach! How they fit in with other team members, attitude and most of all training partners in the water. Florida State has let the entire swim team down in my book, especially the swimmers who were close to Olympic Trial cuts or who had Olympic Trial cuts. These swimmers lost their head coach before Trials. The Coach was fired at the WORSE time possible !!!! This played a tow emotionally and physically on the elite swimmers. Then to have all the assistant coaches fired after Olympic Trials. The swimmers were left without coaches and workouts for a good while. This was also unfair to the assistant coaches, since… Read more »

The schools never agree to a 4 year scholarship it is year to year only. If they don’t commit to 4 why should the athlete?

It’s amazing there is not. So ridiculous and unfair to athletes. Suprises there haven’t been law suits

Agreed. What is the reason for the rule in the first place? Is it just a way to give coaches more control over the athletes since it serves as a way to deter athletes from transferring? There are many reasons why students choose to transfer- sometimes they are not even related to athletics. The rule seems overly punitive.