No Prelims, No Problem Making Finals On Moscow Day 2 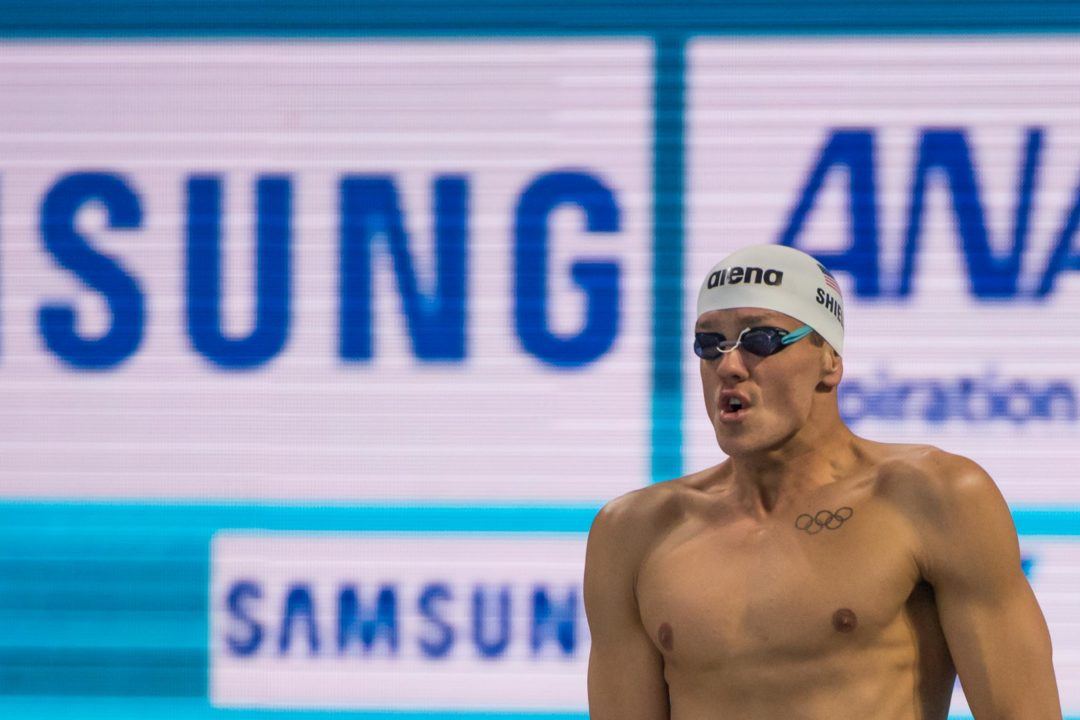 American Tom Shields didn't race this morning's heats of the men's 50m butterfly in Moscow, but he'll appear in the event tonight due to his being a medalist.

Here’s a swimming riddle for you: how is it possible for a swimmer to appear on the start lists for 3 events in a finals session having only raced in 1 during that day’s prelims? With the new FINA World Cup rules in place this week at the first stop in Moscow we’re seeing this scenario play out multiple times, as World Championships and Olympic medalists are no longer required to race prelims and to still be automatically entered into the final.

Such was the case with Russia’s Vlad Morozov with 2 separate events today. Morozov did race the 100m IM this morning to place himself in the final. However, without getting wet in a morning prelim, Morozov will be racing the men’s 100m breaststroke and 50m freestyle events tonight at the JSC Olympisky Sports Complex due to the fact he was silver medalist in each at the 2016 short course World Championships.

And he wasn’t the only athlete to benefit from the new rule this week. American Tom Shields and South African Chad Le Clos also opted out of racing the 50m butterfly prelims, but will be seeded in the middle of the pool for tonight’s final in that event.

However, some athletes still preferred to get a prelims warm-up swim in their favored events regardless. Dutch world record holder Jesse Puts still qualified for the 50m freestyle final even though opted to swim prelims where he wound up 12th. His morning time was 21.81, but he’s auto-entered in the final with his personal best of 21.05.

Sweden’s Sarah Sjostrom, already with one short course world record under her belt here in Mocsow with yesterday’s 50m freestyle, raced the 100m butterfly this morning to claim the top seed. What’s interesting, however, is her morning time was 56.97 and that’s what she’s listed with on tonight’s start lists.  This differs from Puts’ scenario described above.

Hungary’s Iron Lady Katinka Hosszu was also in the pool this AM, taking the top seed in the 200m IM in 2:07.30. However, Hosszu’s seeded time for tonight’s final is 2:02.40, the time earned while winning the short course world title last year.

Also, FINA’s new 4-event-per-leg rule is in full effect, which means fans hoping to see 5-time World Championship medalist in Budapest Hosszu will see their star swim just once today. After having claimed gold in the 100m IM and 100m back with a silver in the 200m fly yesterday, Hosszu is able to race just once more with her 200m IM today, for example.

If you guys don’t like it why not put up something yourselves? A US Invitational where you can do the rules .

Mitch Larkin – 8 seconds off his wr ?

I’m liking the anger in this comment section. This is good. Here’s what I think needs to happen:
1) Those that are eligible to skip prelims need to do so every chance they get, especially those that are out of shape or in heavy training, to emphasize how ridiculous it is that they can just waltz into finals (like, Mel shows up for the 200 fly finals, does a belly flop, a 50 with a few strokes of one-arm, then gets out, etc.)
2) Those that are not able to skip prelims need to publicly criticize the rule, since they can absolutely crush it in the morning and still not be guaranteed a finals spot.
3) The… Read more »

Ridiculous that someone can get a bye to a final, even more so that if they choose to race the heats and fail to make the grade they still go through !!!!
What I don’t get if there were 8 swimmers all qualifying to go straight to a final which I know is highly unlikely to happen, but would they not swim a heats at all ?

Just had an idea: since medallists qualify for finals regardless if they get DQed or NS, if they want to protest against FINA and their mindless rules, they should just keep swimming past the distance ie Hosszu doing a 400IM warmdown for a 100fly prelim for example. Show FINA how ridiculous their rules are.

FINA just elected a VP who was clearly caught on tape talking about bribery – FINA does not care what they look like; they feel they are above the law.

It’s so unfair. All finalists are not on an equal footing. It’s even worse than the stupid new 4-event-per-leg rule.
They tell to Hosszu: “We are tired of watching you win so many finals and even more important we are tired of paying you so much. But we are nice and now you can skip the prelims.”
FINA at its best!

I just had a mini-revelation.

FINA isn’t saving any money by capping an individual athlete’s events. So instead of paying that money to Hosszu, it’s just going to somebody else.