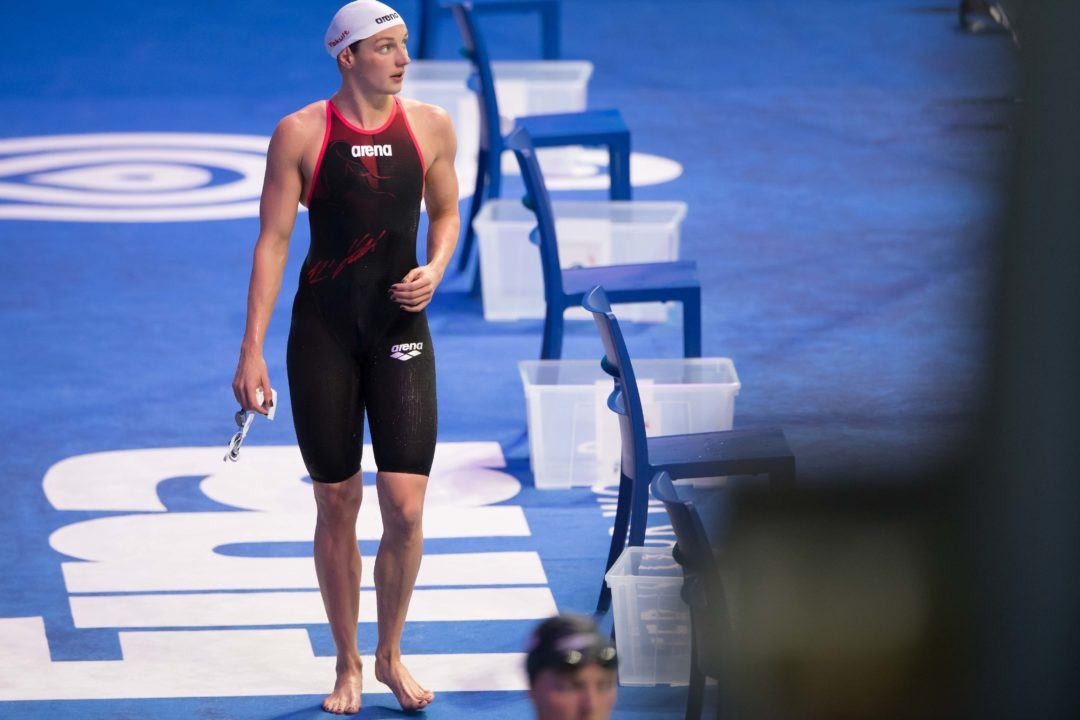 Several big names who made headlines in Budapest jetted over to Moscow for the 1st stop of the FINA World Cup. Current photo via Mike Lewis/Ola Vista Photography

As we enter a new era of sorts of the FINA World Cup, where swimmers are limited to 4 individual events and World/Olympic medalists automatically advance to finals, the first day in Moscow rendered some terrific swims. Several key athletes whom we just had the pleasure of watching do their thing in Budapest are now here at the 1st stop to get some cash before heading home on their quest to Tokyo 2020.

Writers note: SwimSwam is aware of several difficulties with the new rules having been implemented, impacting competition in Moscow. Look for a separate piece regarding the new rules implementation as we gather additional information.

Hungary’s Iron Lady, fresh off 5 individual medals in Budapest, led the field across 2 events this morning starting with the 100m backstroke. A few more walls brought into the short course meters mix saw Hosszu clock a morning time of 55.52, less than .3 off of Shiho Sakai’s championship record of 55.23 from 2009. Just behind Hosszu was the 200m backstroke gold medalist last week, Emily Seebohm, in 57.89.

Hosszu also topped the 100m IM field during our first session, notching a stellar 57.36 to represent the only swimmer sub-58. However, a speeding Swede in Sarah Sjostrom is hot on her heels with a morning outing of 58.23, while Dutch mainstay Femke Heemskerk is ready to rumble in a 3rd-seeded 59.86.

The women’s 200m butterfly also fell victim to Hosszu in the morning where the Hungarian took top honors in 2:02.75. That was a super speedy swim, considering Germany’s Franziska Hentke, the silver medalist in this event in Budapest, hit the wall in 2:06.94, followed by gold medalist Mireia Belmonte in 2:08.15.

Other top seeds in the morning for the women included Alia Atkinson, who was missing from the long course World Championships, but established herself early here in Moscow. She nabbed the 50m breaststroke top seed in 29.73, but Lithuania’s Ruta Meilutyte and Russian gun Yuliya Efimova lurk in the field as the respective 3rd and 5th seeds.

Federica Pellegrini of Italy, who made history clinching her 7th consecutive World Championships medal in the women’s 200m freestyle event, claimed the top seed here in the 400m freestyle in 4:03.15. The next closest heading into tonight’s final is Spain’s Belmonte another who touched just behind in 4:03.49.

The women’s 50m freestyle silver medalist from Budapest, Ranomi Kromowidjojo, fired off a shot of 23.32 in the event here in Moscow, not terribly far from her 23.24 World Record in the event. Sjostrom is right behind in 23.51, while we got a taste of the shape Australian Cate Campbell is in with her time of 23.99 this morning.

Men’s top seeds include Danila Isotov of the host country nabbing the top spot in the 200m freestyle, as one of three swimmers holding a 1:44 effort with a time of 1:44.12. Countrymate Kirill Prigoda also nabbed a top seed in the 200m breaststroke, touching in 2:04.95 to represent the only swimmer to dip under 2:05.

She now holds 7 individual worlds records, same as Hosszu. Let’ see if she can get the 100 free WR as well tomorrow.

Probably will, she could get close to sub 50 at some point this SC season I imagine.

Might even give Katinka a run for her 100IM record aswell. It was not much between them after the breaststroke today, couple tenths at most. Hosszu’s superior turns was the bigger difference, not the breaststroke. Which makes me think if Sjostrom can get the rust in the back and breast out of the way, she can definitely shave that ½ a second. Of course, Hosszu could lower herself aswell.

It looks like hosszu swam heats of the 100bk? How does the direct access to the final work?