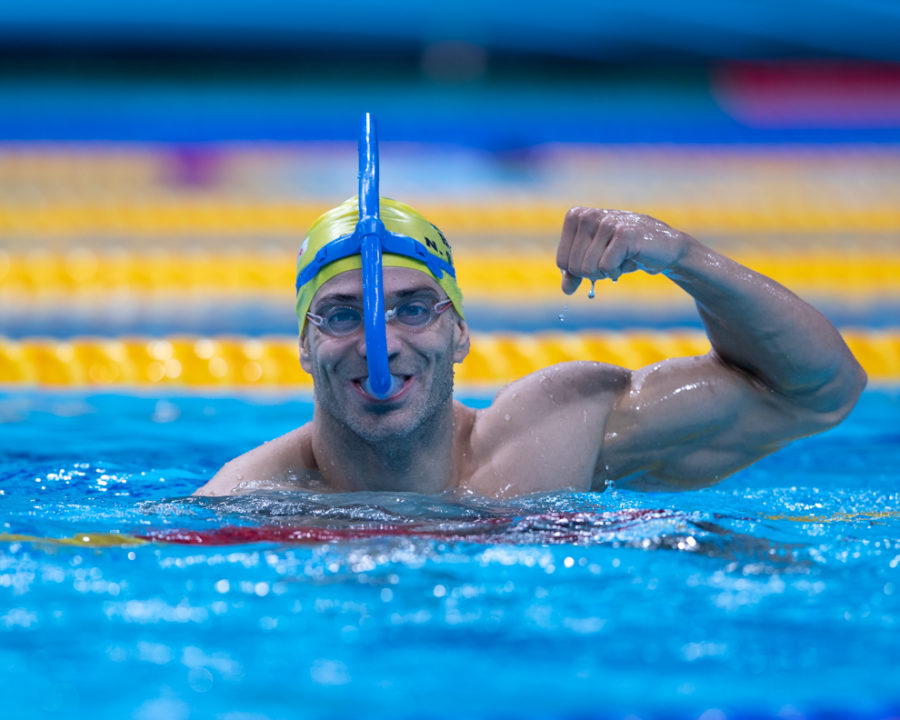 Nicholas Santos set a new South American Record in the 50 fly on day 1 in Budapest. Current photo via “Rafael/Domeyko Photography”

Brazilian Nicholas Santos won the men’s 50 fly for the second consecutive time at the FINA Champions Swim Series, this time doing so in a new South American Record of 22.60.

Santos won the event at the first stop in Guangzhou in 23.01, and now adds the Budapest crown by going over four-tenths faster.

In the all-time rankings, the two-time LC World Championship silver medalist maintains his position at third behind Andrii Govorov and Rafael Munoz, and in terms of performances this checks in as the eighth fastest ever.

Govorov competed in the race tonight in Budapest, placing second in 22.87.

Munoz, who owns four of the six-fastest times ever, notably did all of them with the now-banned high-tech suits in 2009.

Back in December, Santos broke the world record in the SCM 50 fly in a time of 21.75 to win the gold medal.

As of now, he won’t be in the running for gold at the Long Course World Championships this summer in Gwangju, as he was left off the Brazilian roster as they didn’t use stroke 50s for selection. He won silver at both the 2015 and 2017 LC Worlds in Kazan and Budapest.

Wait did he actually swim with a snorkel? Or was he flexing during warm up? I’m confused.

One picture is worth a thousand words.

Seriously!!! We won’t be seeing him at worlds, that was potentially one of the most exciting race (Proud, Santos, Dressel, Govorov, Etc)