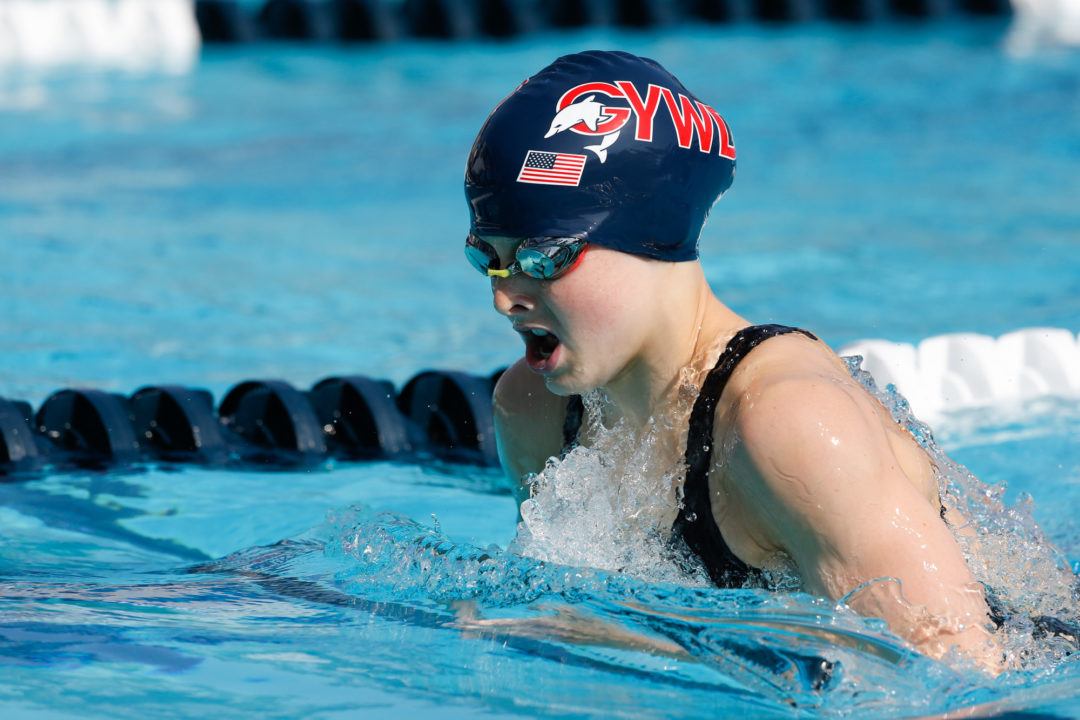 Lynch's age group career has been no joke; she holds 110 team records with the Greenwich YWCA Dolphins and 68 Connecticut LSC records. Archive photo via Tim Binning/TheSwimPictures.com

Connecticut’s Meghan Lynch has verbally committed to the Stanford Cardinal for fall 2021, per local outlet GameTime CT. Lynch trains with Greenwich YWCA Dolphins and is a rising senior at Greenwich High School, and she was named in the ‘best of the rest’ group in our list of the top uncommitted rising seniors from April.

“It feels really good, it’s nice to have that closure — knowing where I’m going to be going next year,” Lynch told GameTime CT. “I felt that Stanford was the best fit for me overall for academics and swimming.”

Lynch has been making waves since she was in the 9-10 age group; she still holds the 10 & under NAG record in the 50 yard breast and the 100 meter breast, and she won the 2016 Swammy Award for the top female swimmer in the 11-12 age group. She’s the defending Connecticut Open HS State champion and state record-holder in the 200 IM and the 2019 runner-up in the 100 breast.

While Lynch has had the most success to date in breaststroke and IM, she also brings strong mid-distance free prowess to the table. Stanford has churned out a ridiculous amount of IM talent lately; names like Maya Dirado, Katie Ledecky, Ella Eastin, and current roster-member Brooke Forde are just a few of the most recent testaments to the Cardinal IM group.

So far, only diver Lauren Burch has verbally committed to Stanford for the class of 2025. Most Stanford commits will wait until the summer before their senior year to get a positive read from the admission’s office and then announce; while Lynch is their first public swimming commitment, more announcements are likely on the way.

Stanford recruits itself. The rich get richer.

Congrats Meghan – we have watched you swim since you were a 10 year old triathlete. Can’t wait for you to score at NCAA!

We should start hearing from the Stanford recruits soon. Hopefully Huske, Tang and others will announce soon.

A link to story about Lynch’s commitment. A fun read.
https://www.greenwichtime.com/sports/highschool/article/Greenwich-s-Meghan-Lynch-announces-commitment-15371319.php

It’s about that time of year again! Congrats Megan!!