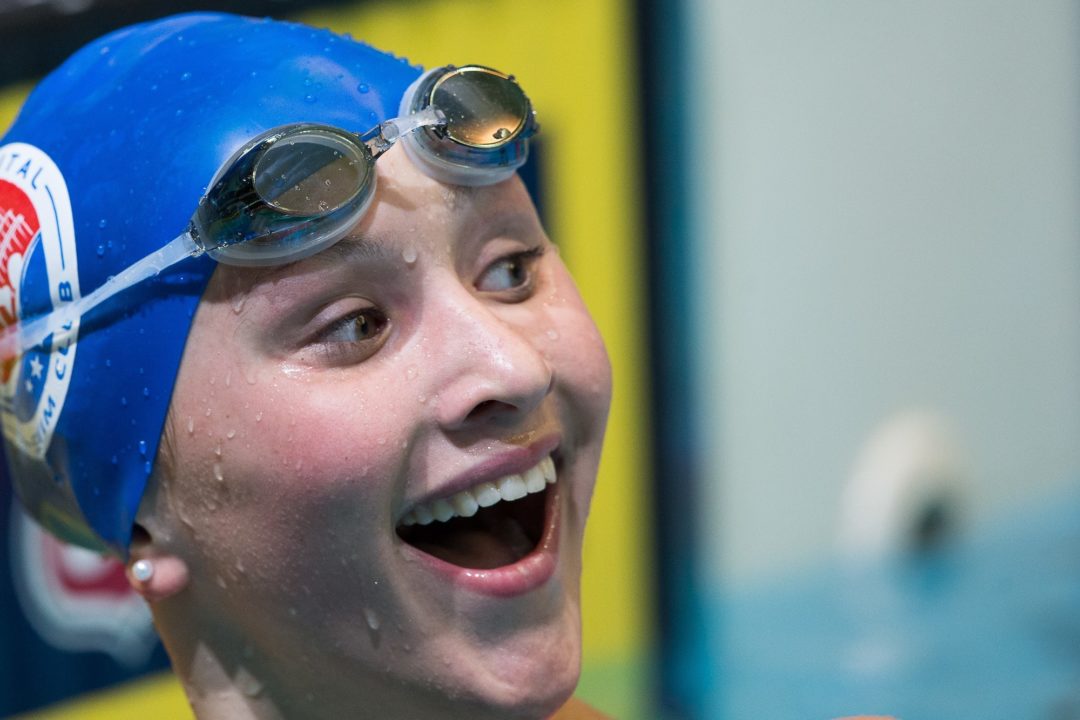 If there is one thing that is readily becoming more apparent in recent years, it is the fact that Age... Archive photo via Tim Binning/TheSwimPictures.com

If there is one thing that is readily becoming more apparent in recent years, it is the fact that Age Group swimming is reaching an unprecedented level of excellence. This trend was continued with the second night of swimming at the Tom Dolan Invitational where multiple national age group records fell in a flurry.

First, and perhaps most impressively, Cassidy Bayer of the Nation’s Capital Aquatic Program shattered a 34 year old record held by none other than Olympian Mary T. Meagher in the 13-14 200 yard butterfly when she swam to a new national standard of 1:56.01. The old standard was a 1:56.58, and the time was a personal best by a full three seconds as Bayer went a 1:59.03 exactly one year ago at last year’s Tom Dolan Invitational.  For perspective, even though Bayer is only 14 years old, her time would have made the B final of last year’s women’s NCAA Championships, and she is not far from being as fast as those who same in the big heat. Bayer came back and won the 50 yard freestyle in a winning time of 23.29, and though that is not a record, it is a personal best for her by about two-tenths. Finally, she completed her triple gold performance by winning the 100 yard back in a 54.90, which is also a personal best by two seconds.

In the 13-14 boys’ 200 buttefly, the crowd at the University of Maryland nearly saw another national age group record toppled as NOVA’s David Dixon just missed a 10 year old record held by Olympian Ricky Berens at 1:48.24, and instead had to settle for a first-placed effort of 1:48.43. The time was a best time by 2.5 seconds for Dixon, and notably, his performance would have ranked second in the Open Men’s 200 butterfly race. The second age group record of the night felt when Penn Charter’s Reece Whitley broke his second breaststroke age group record in as many days as he cruised to a blistering 2:00.14. The time cuts a full second off Curtis Ogren’s record of 2:01.17 that had stood since 2010, and is a personal best for Whiteley by 5 full seconds (his 2:05.14 from prelims was his previous best). Incredibly, Whitley is only 13 years old, so he will have multiple opportunities to lower his record and become the first 13-14 swimmer to ever crack 2 minutes, an incredible feat to behold.

Aside from the record setters at the meet, there were a slew of other very impressive performances across the board. One that deserves mention belongs to 13 year old Madison Homovich of the North Carolina Aquatic Club dropped 9 seconds off her personal best from prelims to win the girls 13-14 500 yard freestyle in a time of 4:47.36. Though this is not a record, as our good friend Bobo has pointed out, the swim is faster than what Olympian Katie Ledecky swam at the same meet at the age of 13 a few years back, as Ledecky clocked a 4:48. This is surely a very promising sign for Homovich, and the time is very impressive in its own right for a girl of just 13 years.

Also deserving recognition is NCAP’s Janet Hu, who came off her new national age group record in the 50 yard freestyle last week at the AT&T Winter Nationals (21.82) to swim another sub-22 effort on Saturday as she won in a 21.94. This was not long after she captured the 200 butterfly title in the Open age group in an extremely quick time of 1:54.37. This was a personal best for Hu, and would have secured a place in the A final last year at NCAAs, and this means very good news for her possibilities next year at Stanford. Also in the same race as Hu was Ledecky, who swam a 1:55.88 which is a best time for her by almost 2.5 seconds.

Allie Szekely of Central Bucks Swim Team was not able to match her 13-14 National Age Group Record time from last year when she went a 2:10.22 in the 200 yard breaststroke, but she was still able to win in dominant fashion with a 2:12.81 in the Open age group. In the men’s race, Carsten Vissering of Nation’s Capital was also slightly off his best as he was the sole swimmer under 2 minutes at 1:59.01, though he has been 1:56 before.

Live Results can be found here.

Wow. Fast swims. Cassidy Bayer and Reece Whitley!! wow! And
Ledecky’s 200 fly time is pretty impressive for a freestyler. Hu’s
50 freestyle consistency and range of events is amazing. Bayer is a
big star who I think is going to continue to succeed and challenge
on the international scene in the next few years.

NCAP swimmers are on fire!

Big honors for Cassidy Bayer and Reece Whitley after breaking NAG records.
Reece Whitley’s times are impressive for a 13-year-old kid. Next year he can put the 13/14 NAG records on breaststroke at a very high level. 53 and 1.56?
Cassidy Bayer is a diamond and a big international star in the making. I repeat for a few years she will be one day olympic champion or world champion, or both, in the future. Big natural talent.

Honored you mentioned me about Madison Homovich. I have a very good memory of the numbers and the records. I remembered the first big meet I watched Katie Ledecky in 2010 when she was 13. And she swam 1.48 in the… Read more »

Bobo gets a shout out!

When will the breaststroke form and function analysis come from PsychoDad?