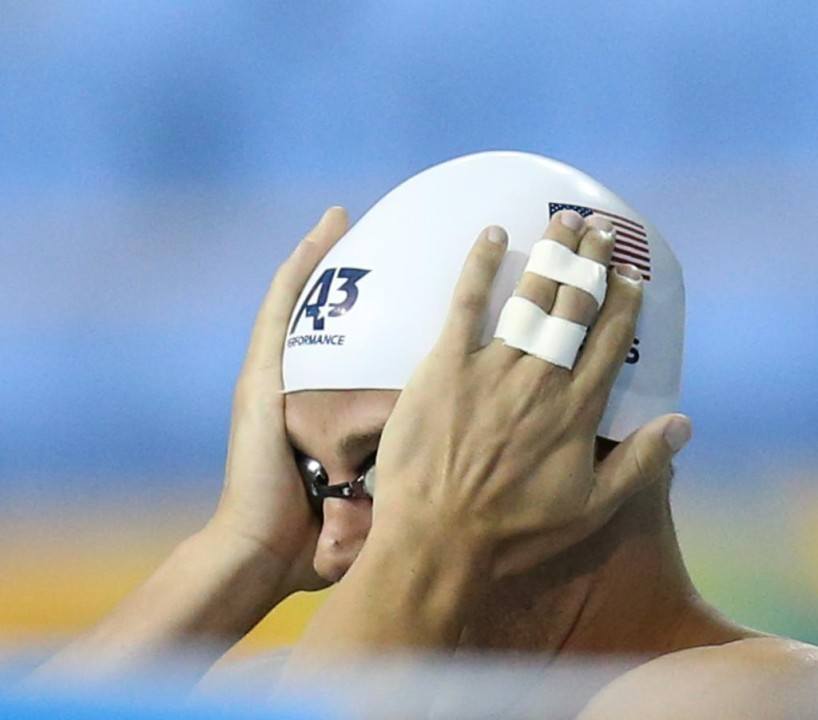 Michael Weiss swam the 400 IM with tape on his finger on Thursday morning, and wasn't disqualified. Archive photo via Mike Lewis/Ola Vista Photography

Even after Wednesday night’s fiasco with the disqualification, and reinstatement, of the American silver-medal winning 800 free relay at the 2015 Pan American Games, U.S. swimmer Michael Weiss still had his fingers taped in Thursday morning’s preliminary heats of the 400 IM.

While USA Swimming has still not responded for clarification on what the appeal was and why it was successful, the implication is that the approval for the tape has since been received, either by Weiss specifically or by the Pan Ams staff.

According to FINA rules, only the FINA Sports Medicine Committee can approve “any kind of tape on the body,”

SW 10.8 No swimmer shall be permitted to use or wear any device or swimsuit that may aid his/her speed, buoyancy or endurance during a competition (such as webbed gloves, flippers, fins, power bands, or adhesive substances, etc.). Goggles may be worn. Any kind of tape on the body is not permitted unless approved by FINA Sport Medicine Committee.

At any rate, Weiss swam the 400 IM with the tape, and took 2nd in his heat with a 4:17.96 to safely advance to finals. The top seed was his fellow American Max Williamson, who swam 4:17.92. There was a moment of trepidation after the race, as the in-house announcer of the meet said that “the results are not yet official,” implying a possible disqualification, but it was a Mexican swimmer who was disqualified on an unrelated infraction.

Rule begs for some rational discretion. If it is a bandaid or medical tape it is silly to DQ an athlete. The likely issue is one of coach or athlete disclosure and asking for permission before getting on the blocks, but at least some blame on this controversy goes to the DQ giddy officials…I have not read where the US protest went last night, but this is one rule of discretion that should be exercised rationally. It isn’t like the US swimmer wore a device that increased flotation or artificially reduced body drag or left the blocks early on a relay exchange.

While it doesn’t provide an advantage per say, the removal of the tape clearly would have caused him some discomfort and likely would lead to him not swimming as well. So where most argue that it didn’t make a difference anyways, take away that tape and he can’t swim the same race. Dive in with a broken or sprained finger badly and his pull is gone. Rules a rule, I think it should have been held as a dq. Could cause a precedent for future cases. What’s the point of a rule if its going to be overturned

I agree. We need more transparency as to why they were initially disqualified and then reinstated. Also, arguing that the tape could be approved after the event just doesn’t make sense. It should be already approved at the time of the race. You shouldn’t be able to retroactively approve the tape. That’s just unfair. I also agree that there is the question of unfair advantage – taping your fingers together does give a tiny advantage and as the person above me pointed out, without the tape Michael Weiss probably could not have swum the race.

@ Just Sayin
In other sports athletes are allowed to wear devices that aid them in reducing pain or discomfort due to an injury…knee braces, ankle braces, athletic tape, etc…Definitely think this rule should be amended.

We have never talked about fingers as much as right now.
What is the next part of the body which will create such another drama?