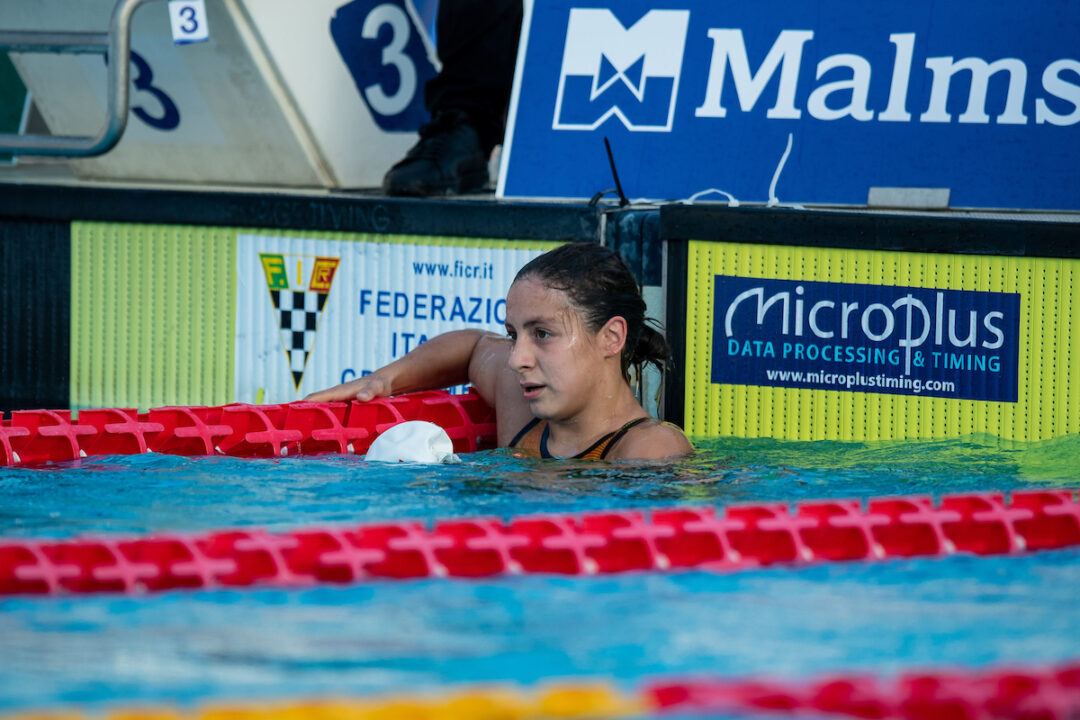 Tuncel will be looking to collect a second gold medal during the 1500 freestyle final, adding to her 800 freestyle victory on day 1. Current photo via Andrea Masini / Deepbluemedia / Insidefoto

Turkey continued its distance dominance during day 4 prelims of the 2021 European Junior Swimming Championships as Merve Tuncel took out the Championships record in the women’s 1500 free with a 16:10.28. That swim for Tuncel got under Hungarian Ajna Kesely‘s former mark of 16:11.25 from the 2017 meet.

Tuncel won gold earlier this week in the women’s 800 freestyle in European junior record fashion of 8:21.91. In the 800 freestyle, teammate Beril Boecekler took silver in an 8:33.52 and in the women’s 1500 freestyle prelim it was Deniz Ertan who nabbed second seed with a 16:18.55. Tuncel, Ertan, and Boecekler have emerged as quite a powerful trio for Turkey over the past few seasons and are all expected to be named to the Tokyo 2020 Olympic roster.

David Popovici swam a much-expected conservative 200 freestyle prelim on day 4 of racing. Popovici’s PB in the event is the 1:46.15 Romanian record he swam in June but here he was just a 1:50.01 for third seed overall. Popovici used a similar tactic in the 100 freestyle earlier in the meet when he swam a 49.50 in the heats before getting down to a 47.30 world junior record in the final.

Popovici could potentially swim a bit quicker during the semi-finals but all eyes will be on him in the final to see how close he can get to Hwang Sun-woo‘s 2020 world junior record of 1:45.92. Italy’s Lorenzo Galossi was first in the prelims with a 1:49.27 and Jovan Lekic of Bosnia and Herzegovina followed in a 1:49.28.

Katie Shanahan of Great Britain got 1 step closer to collecting her 3rd individual medal of the meet by placing 1st overall in the women’s 200 IM heats. Shanahan previously won gold in the 400 IM and then bronze in the 100 back. Shanahan swam a 2:16.77 in the 200 IM heats to slightly trail her entry time of 2:13.77.

Following Shanahan, the Russian duo of Viktoriia Starostina and Anastasiia Sorokina delivered respective times of 2:16.96 and 2:17.12. While that swim for Starostina was right around the 2:16.69 she was entered with, Sorokina trailed her top-seeded entry time of 2:12.90 by a few seconds. Sorokina will also be looking to pick up her second IM medal of the meet, having won bronze in the 400 IM with a 4:45.58 to Shanahan’s 4:42.59 and Deniz Ertan‘s 4:43.65 for Turkey.

Galossi born in 2006. Youngest of all the 200 participants

Any idea what happened to all French swimmers this morning? None of them competed.

2 positive tests. Did not repeat at second testing.

Yo lowkey ryan Murphy is the hottest swimmer