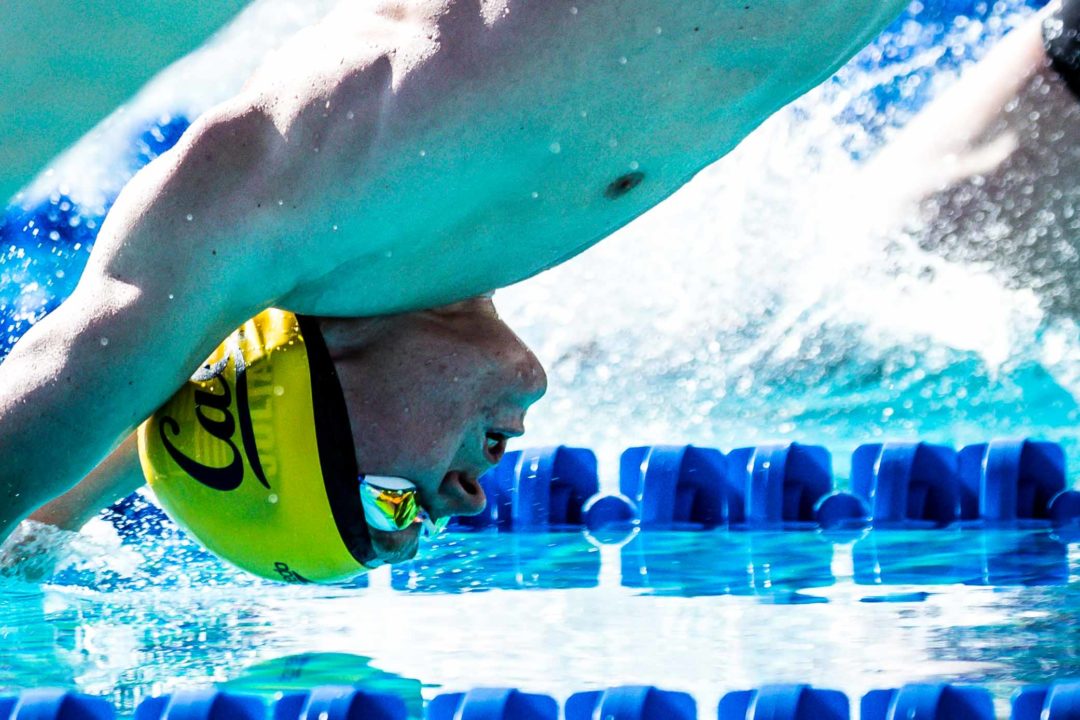 California pulled 5 of our top 20 recruits. All five scored in each of their 3 NCAA meets. None scored less than 70 points. And the class scored 529.5 total. Archive photo via Jack Spitser/Spitser Photography

Back in July of 2017, we ranked out the top 12 recruiting classes nationwide. You can look back on our ranks here:

We’ve republished each of the 12 classes below, verbatim from how they were listed in our 2017 post. Then we tracked down some stats on each class, plus a short analysis of each class along with any extra swimmers who wound up being part of the class.

*Special 2020 note: with the 2020 NCAA Championships canceled, any 2020 references below refer to psych sheet scoring, including the team finish, marked with an asterisk.

South Carolina’s big get was the Brazilian sensation Almeida. But he only competed in the NCAA for one season, scoring 15 points as a freshman.

Murphy was a brilliant college swimmers, scoring 55 points between just his sophomore and senior seasons. (He didn’t score as a freshman but was seeded to score 17 in the canceled junior year NCAAs). Reed scored in two seasons.

House scored 9.5 points between his freshman and sophomore seasons. He redshirted in 2020, and then the entire program redshirted in 2021, and it’s unclear how many more years House will compete at the college level. Arizona State also would have likely added Carter Swift as a scorer in this class – he was seeded with 12 points in 2020. Dalmolin didn’t score for ASU, but scored for Georiga later in his career, post-transfer.

You can see the huge rise in NCAA finish over this group’s four years. Tornqvist scored 5 points individually as a senior.

This crew never finished lower than 9th in an NCAA meet, including a pair of 5th-place showings. Albiero was one of the top scorers in the entire class, putting up 110 individually with another 50+ projected in 2020. Somov scored 42 individually. Sos scored 2 as a sophomore.

Another group with outstanding team finishes in all of their NCAA meets. Capobianco was one of the most productive athletes in the class, scoring 94 points. He could have another year left after a 2020 redshirt. Fantoni scored as a sophomore and senior, but was a relay factor even as a freshman. Blaskovic scored just one individual point, coming in his freshman year. He was seeded to score 38.5 in the canceled 2020 meet and would likely have scored big in 2021 had he not been a late-season scratch.

Molacek was actually a Class of 2014 high school grad who had a transfer and a gap year in his college career. He scored and won several NCAA relay titles with NC State. Izzo could still have more eligibility left. Knowles scored as a sophomore.

Glinta was a freshman star who scored 14 points and broke 45 in the 100 back. But he turned pro after one college season. Sannem transferred out, but did eventually score big for Texas. Attrition was brutal on this group – in fact, not a single one of these four were on the roster as of this past year. Miljenic was the only true senior, scoring a few points this year after transferring from Indiana.

Liang scored in both his sophomore and senior seasons. Calloni tied him for the team lead with 9 individual points, all put up in his sophomore year. Pastorek scored as a freshman and was seeded to score again as a junior.

Florida’s superstar recruit in this class, Taylor, had his career pressed by medical issues, but this class still spanned a great run inside the NCAA’s top 6. Beach scored 25 points between his sophomore and senior seasons, and probably had a dozen or more points to score in the canceled junior-year meet. Gezmis was a solid NCAA contributor and bubble NCAA swimmer as a freshman before transferring to NC State, where he was a relay contributor and NCAA qualifier.

Windle turned out to be the #1 scorer in this class, putting up 45+ points in all three of his NCAA meets. He’ll get one more year to add to that total, as he’s suggested he wants to take advantage of extra NCAA eligibility. Katz scored big, including one individual NCAA title and two relay titles. Pomajevich scored huge as a rookie, then slumped as a sophomore, but returned to scored 20 again as a senior. Yeager never scored, but was an NCAA invitee in multiple seasons. He was a roster cap casualty as a junior.

This was an incredible group that, frankly, made our recruit rankings look good. All five of Cal’s top-20 recruits scored and scored big. None of the five scored less than 70 points over three seasons. All five scored in all three NCAA meets they took part in. And all five finished in the top eight across the entire class in individual scoring. Hoffer scored 131.5 and won a class-leading 4 NCAA titles individually. Carr (70 points) won an NCAA relay title. So did Biondi.

Julian scored 96, including 48 as a senior and had 33 psych sheet points in the canceled season. Grieshop scored 90. Mefford scored 78. Cal also added transfer Hugo Gonzalez, who scored 42 as a senior and may have another year or two of eligibility, if he chooses to take it. Yeadon scored 34 over two seasons with Notre Dame followed by 22 in one NCAA meet with Cal.

When are the top 16 college rankings for class of 2021 womens coming out???

This article (and others like it on Swimswam) is such a wonderful example of data-driven commentary. Get it, Jared! Job well done.

Zach Yeadon swam for ND all of the 19/20 season, therefore his seeded points at the 2020 NCAA championship were for Notre Dame, not Cal as is listed

Great job TENNESSEE! Making the list of top 30 is amazing. Keep up the great work the sky is the limit.