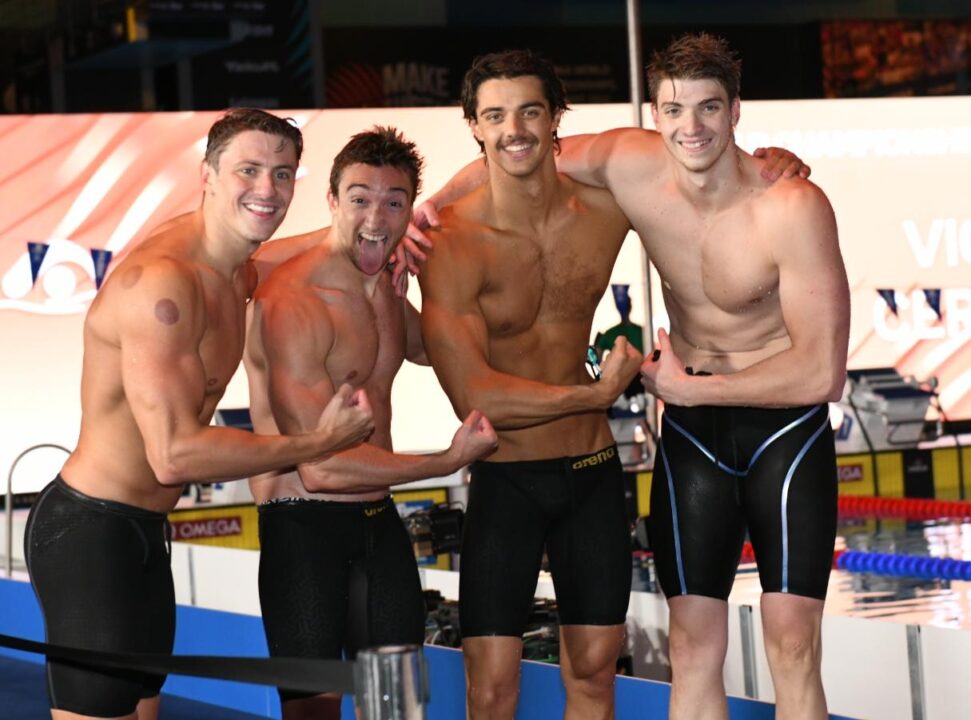 Burdisso going half a second faster than he did on the medley relay in Tokyo was one of the big factors that decided the race between Italy and the U.S. Current photo via Fabio Cetti

In the finals of the men’s 4×100 medley relay, Italy pulled an upset on the United States, who were the heavy favorites to win this race. The quartet of Thomas Ceccon, Nicolo Martinenghi, Federico Burdisso, and Alessandro Miressi put together time of 3:27.51, which ties Great Britain’s European record that was set last year. They edged out the Americans by 0.28 seconds, and it was a close race throughout.

Thomas Ceccon got the Italians off to a scorching start with a 51.93 leadoff leg, a time that would have taken silver in the 100 back just behind his own 51.60 world record time. His swim from today ranks as the fourth-fastest performance of all time, just behind his world record, Ryan Murphy‘s 51.85, and Xu Jiayu’s 51.86.

Just like the backstroke, the breaststroke was also a two-country battle between Italy and the United States. 100 breast world champion Nicolo Martinenghi got his hand to the wall first with a 57.47 split, the ninth fastest 100 breast relay split of all time behind eight of Adam Peaty’s times. Nic Fink also had a strong leg, matching his 57.86 from the mixed medley relay.

Stepping up in the absence of Peaty, James Wilby was just 0.11 seconds faster than his individual time, putting down a 58.82 to push the Brits from fourth to third. Zac Stubblety-Cook was a bit off for the Aussies, going 59.88 compared to his mixed medley relay split of 58.92.

Even without Caeleb Dressel, the butterfly leg was supposed to be where the U.S. had the biggest advantage over Italy. Michael Andrew still had a very strong fly leg for the U.S. splitting 50.06—the fastest out of any swimmer by 0.47 seconds. However, Italy’s Federico Burdisso had stayed with him the entire time, clocking a 50.63 split. This was a huge moment for Burdisso, considering that he wasn’t even on the original Italian worlds team roster individually. He made a big improvement from the 51.07 that he swam on Italy’s Tokyo medley relay, and that time drop could have potentially decided the entire race. The way that Burdisso held onto Andrew was almost reminiscent to how Chelsea Hodges stepped up for Australia on the women’s medley relay last year at the Olympics, staying close to Olympic champion Lydia Jacoby to help her team get gold.

Matt Temple had a strong 50.75 split to push the Aussies from seventh to fifth. For Great Britain, James Guy went 51.32, slightly off the 50-point splits that he usually produces on relays. That being said, he did swim three rounds of the 200 fly this meet compared to other meets where he was primarily a relay swimmer, which could have contributed to fatigue headed into the final day of the meet.

Kyle Chalmers once again dropped a 46-point split, going 46.89 to boost the Aussies from fifth to fourth. This comes after splitting 46.60 on the men’s 4×100 free relay and 46.98 on the mixed 4×100 free relay, and definitely earns him the award for the most clutch relay performer of this meet.

It seems Burdisso’s 100 fly has been much better since he has been at Northwestern? But his 200 fly has gone downhill. I don’t know how much time he has been in Evanston vs at home!

I don’t know why the article says Burdisso held on to MA. MA started behind Burdisso and made up the deficit. He swam 0.6 seconds faster than Burdisso.

Ngl that was my favorite MA swim yet

Murphy sold sadly but we’ll get ‘em next time

Yes, it might be. But Italy did a great job. Congrats to them and no sour grapes.

How much time is typically gained on a relay start, 0.5 seconds? Martinenghi then just did an equivalent sub 58 second 100m split if he had a standing start. Ridiculous!

Wow incredible effort by Italy. All four legs seemed to fire at the right time

Very happy for them.

GB will have no chance against Italy in the European Champs. James Guy swimming well off his Tokyo times and Peaty’s advantage over Martinenghi likely to be just a few tenths even if he recovers well from his injury.