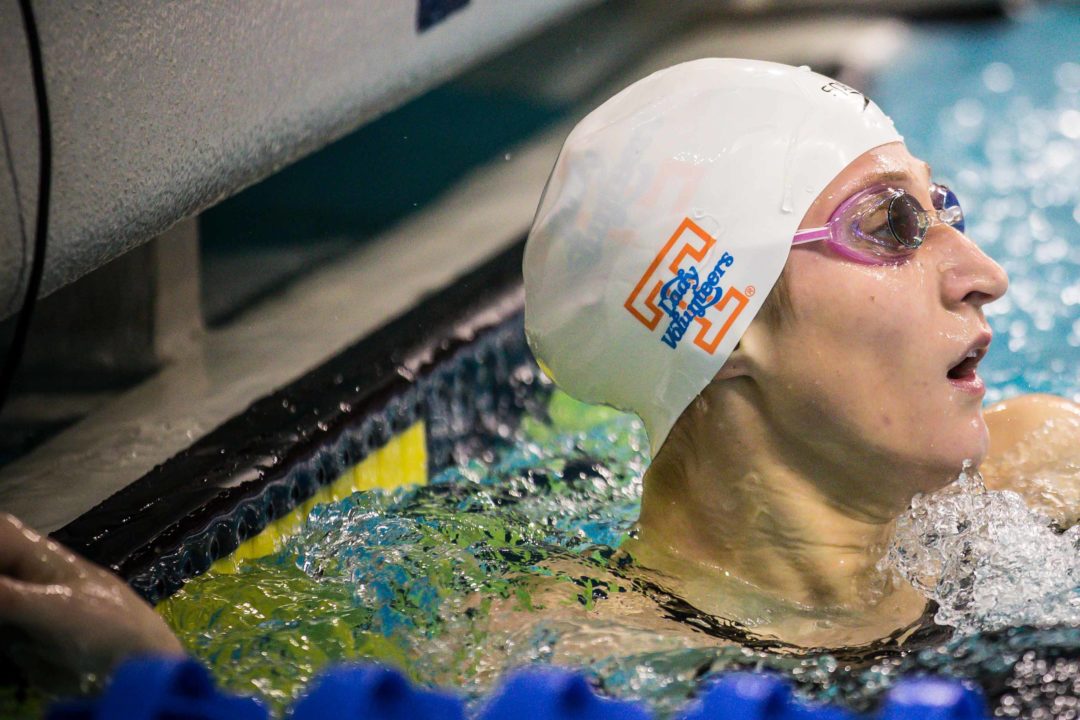 Meghan Small, who graduated from the University of Tennessee in the spring, capped off her practice yesterday with a swim of 2:08.24 in the 200 breast. This came after her racing to a new best time of 51.67 in the 100 fly just minutes before.

Small, who competed in, or in the case of 2020 was entered in, a different NCAA Championships lineup in each of her four years at Tennessee, was entered to swim the 200 breast last spring. During her senior season, her best time in the event was a 2:12.89, swum at the dual between Louisville and Tennessee in October of 2019.

Her time from yesterday would seeded her 21st in the event at the 2020 NCAA Championships, a large jump from the 49th place that she was originally seeded. She was ranked 93rd in the event nationally last season, making her choice to compete in that race at NCAAs instead of the 200 back, on the same day, somewhat of a shock. As a junior in 2019 she finished 9th at the NCAA Championships in the 200 back.

Small’s swim in the 100 fly was not only her first time dipping below 52.0 in the event, but also her first best time since November of 2018, albeit in an unofficial practice swims. One of the few events she never contested at the NCAA Championships, Small’s 51.67 would have tied her as the 17th seed in the event at the 2020 iteration of the meet.

A lot of people wondered why we took @meghan_small out of the 200 BK at NCAAs where she was seeded to score a lot of points and replaced that event with the 200 BR where she wasn’t even seeded to score… This is why 🤫 – 2:08.24 in practice today! AFTER racing to a new best time of 51.67 in the 100 Fly a few minutes before! #gbo #igtbatv #ijmm #thefutureisbright @swimswamnews @swimmingworldmag @mkredich

In September it was announced that Small would be joining the Cali Condors of the ISL, along with fellow Tennessee graduate Erika Brown, for the league’s second season. Because of Small’s versatility she will have the potential to benefit the Condors in multiple events as needed throughout the season. The ISL season will start next Friday, October 16th, with Small’s Cali Condors facing off against Energy Standard, the LA Current, and the NY Breakers.

While those 2 swims in practice won’t wind up in any official databases, it does validate her value for the Condors this season.

Chupkov-esque splits. Considering how easy that front half looked, I can’t help but think she’s got a faster time in her.

Versatility has been a strength of the Tennessee program. Erica Brown is another prime example. She didn’t swim fly much coming out of high school. Josh Huger is making an impact.

Please explain why Huger deserves the credit for Brown and Small. This is a guy who seems to have the smallest impact of the whole staff in terms of who and what he actually gets to coach. There are good things happening in Knoxville, but I don’t think Huger has as much to do with it as Kredich, Asti, Murphy, Parrington, and Jahn.

Crash is a great username, because that is a train wreck take.

From my understanding—Asti only works with the men, and Brown and Small are NOT men. Parrington is a diving coach, and I’m quite confident that Brown and Small don’t compete in diving competitively. Jahn seems to focus more on the college team and it feels like Huger focuses more on the sprint group/pro group with Kredich jumping around to all aspects of the team.

Also pretty awesome considering she only did a dolphin kick off every wall! Speedy

A literal plug-and-play in any event. Sad this class didn’t get it’s swan song, but can’t say enough about her Lady Vol legacy!

Great job, she could really be a contributor in the ISL if she shows up well. Makes me wonder what she would’ve gone in this event at NCAAs.