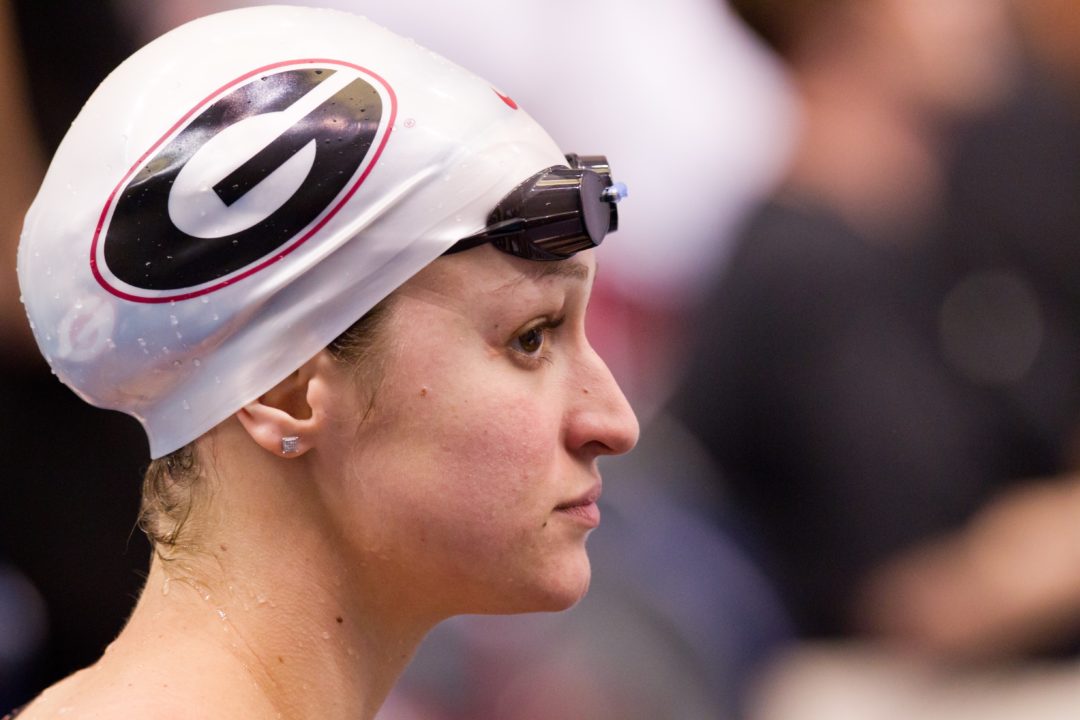 Megan Romano of Georgia will be a busy lady at the World University Games next year in Russia. On night 4 from the US Open in Indianapolis she won her 3rd and 4th event of the meet. One of those wins came in a new US Open record.

Romano took down her 2nd meet record en route to her 3rd national championship in the Women’s 200 Freestyle. Her winning time of 1:57.54 is not only a personal best but also the 4th fastest American time in 2012. The meet record was a 1:58.81 set by Samantha Tucker in 2009, but the top 5 finishers all were faster than that tonight. Chelsea Chenault, one of the blue chip recruits in the class of ’13, finished 2nd with personal best of 1:58.41. As a high school senior Chenault won’t be eligible for the World University Games so Sarah Henry of Texas A&M, who finished 3rd with a 1:58.55, will add the 200 free to her WUG schedule. Last night she finished 2nd in the 400 IM to earn a spot on the roster. Catherine Breed and Jasmine Tosky both cleared the old meet record finishing in 1:58.62 and 1:58.70 respectively.

Kevin Cordes is having another fantastic meet. Earlier in the week he broke the 17-18 National Age Group record in both the prelims and then again in the finals. He did it again tonight in the Men’s 100 Breaststroke with a time of 1:00.47, but just like in the final on Wednesday night it wasn’t enough for the win.Wednesday in the 200 it was BJ Johnson running Cordes down at the finish. Tonight in the 100 Mike Alexandrov jumped out early (28.19 on the first 50) and stayed just out of Cordes’s 6’7″ reach to take the win in 1:00.03. Cody Miller continued Indiana’s strong showing at The Open taking 3rd in 1:01.11.

Romano made her encore appearance in the Women’s 100 Backstroke. Her winning time of 1:00.37 was a couple tenths off her best and just .13 in front of Lauren Quigley of Great Britain who touched 2nd in 1:00.50. Romano has now qualified on the WUG team to swim the 100 and 200 backstrokes as well as the 100 and 200 freestyles. Noriko Inada of Phoenix Swim Club rounded out the top three with a 1:01.35.

In the Men’s 100 Backstroke final, Kyle Owens was 7th at the turn but managed to close better than anyone in the field splitting :26.98-:27.47 for a winning time of 54.45. Jacob Pebley of Corvallis is not an easy person to close out (he won the 200 back earlier in the week) but Pebley couldn’t keep up with Owens and finished 2nd with a 54.49. Eugene Godsoe lead the field at the turn, but Godsoe couldn’t hold off Owens and Pebley on the 2nd 50 and had to settle for third with a :54.82. That’s over a second slower than Godsoe’s 5th place finish at Olympic Trials.

Interesting, Pebley was 3 hundredths off 17-18 NAG record, I believe.

Why wouldn’t Romano try to make the World Championhip Team in 2013 rather than go to World University Games?

Romano couldn’t do both?

ugamom – the rules, seen below, specifically state that unless USA Swimming makes a special exception (it’s rare that they would) members of the 2013 World Championship Team aren’t eligible for the WUG’s. Will be sort of an odd predicament, as WUG’s roster will be named September 1st and Worlds not until next summer.