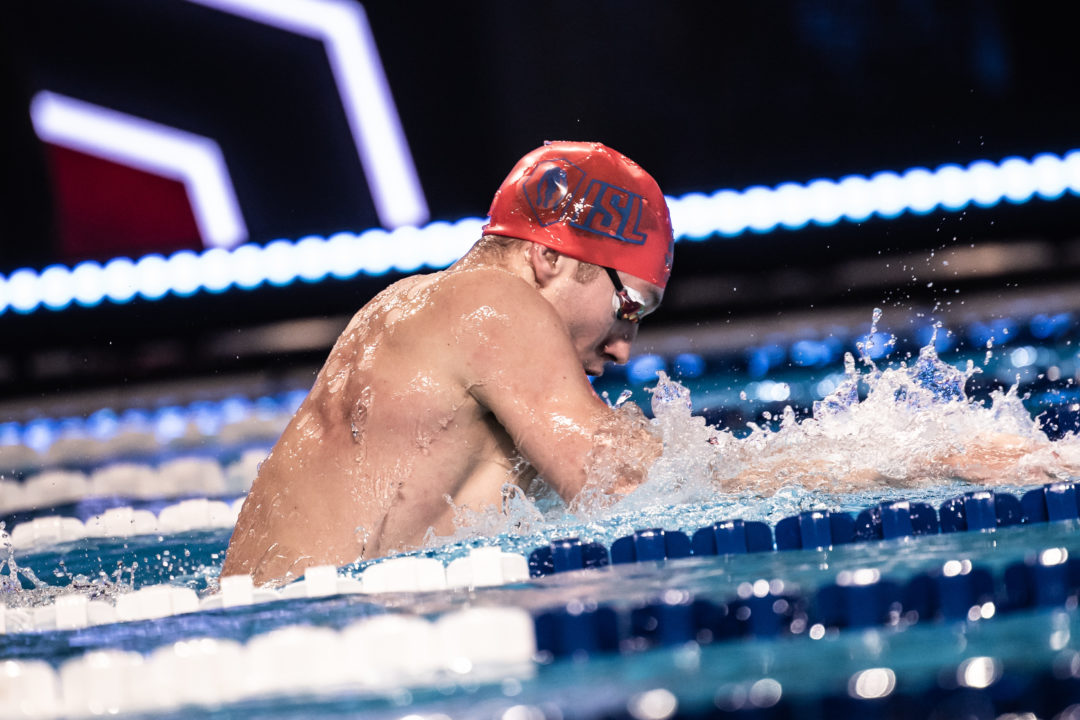 You read earlier about Andrei Minakov's European Junior Record in the 100 fly but read what else happened in St. Petersburg tonight. Archive photo via Mike Lewis/Ola Vista Photography

Belarusian breaststroking ace Ilya Shymanovich was in the water again on day 2 of the 2020 Vladimir Salnikov Cup, wreaking havoc on the 100m breaststroke event. After nailing a new championships record in the 50m yesterday, the 26-year-old reaped a winning 1breast effort of 56.04 to mark another meet record.

Splitting 26.16/29.88, Shymanovich took the meet title with ease. This is just days after he took down British Olympic champion Adam Peaty’s World Record, setting the mark now at 55.34 from the just-concluded Russian SC Championships. You can read more about Shymanovich’s swim here.

Arina Surkova was successful in the women’s 100m free, taking the victory in a time of 52.96. As the only swimmer under 53-seconds, Surkova opened in 25.68 and closed in 27.28 to get to the wall nearly half a second ahead of runner-up Daria Trofimova who touched in 53.39. Trofimova is just 15 years of age.

Just days ago Surkova settled for runner-up in this 1free event at the Russian SC Championships, producing a time of 53.21. Tonight’s performance checks-in as the 5th fastest performance of the 22-year-old’s career. She would double up with a victory in the 50m free as well, registering a winning effort of 25.27.

The men’s 200m free final was as close as we expected, with the top 2 finishers separated by only .05. Ivan Girev doubled up on his 100m free victory from last night with this 2free gold, stopping the clock in a time of 1:42.56. That was enough to just get to the wall ahead of Martin Malyutin, the man who tied Duncan Scott for bronze in the long course version of these event at last year’s World Championships.