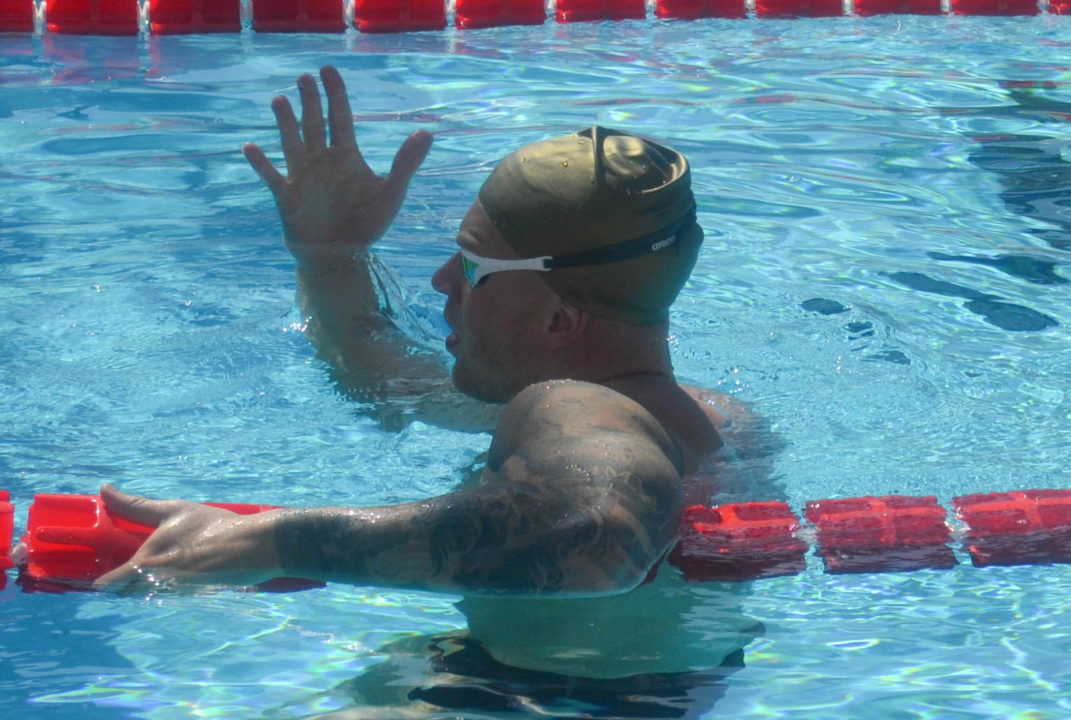 Adam Peaty raced the men's 50m breaststroke prelims in Bangor, producing a time of 26.83 with tomorrow morning's final yet to come. Archive photo via Giusy Cisale

Olympic champion Adam Peaty was back in the water tonight, swimming the men’s prelims of the 50m breaststroke here at the McCullagh International. Following his modus operandi, the 25-year-old cleared the field with ease, landing the middle lane for tomorrow morning’s final in 26.83.

The next closest competitor was Darragh Greene of the host nation, hitting a time of 27.41, while Ross Murdoch rounded out the top 3 in 27.65. James Wilby is also in the mix, sitting 4th in 27.85.

Peaty’s performance in the heats now places him #2 among performers worldwide this season, positioned only behind Belarusian Ilya Shymanovich.

As a reminder, this meet’s format includes prelims in the evening, with finals the following morning, mimicking that which will be the protocol for this summer’s Olympic Games in Tokyo.

The women’s 50m breast gold is up for grabs, with Sarah Vasey putting up a solid prelim effort of 31.73, as Irish national record holder Mona McSharry posted a mark just .13 behind in 31.86.

McSharry’s lifetime best sits at the national standard of 30.87 she registered 2 years ago at the Edinburgh International, while Vasey is Great Britain’s 2nd fastest performer all-time, owning a PB of 30.30 from 2017.

McSharry was in the water for the 50m free as well, taking the 2nd seed in a 26.31 behind the quickest evening swimmer of Danielle Hill.

Hill stopped the clock in 25.42, only .13 outside the Irish national record of 25.29 she set last year. The 20-year-old has already nailed a new 100m backstroke national standard here in Bangor.

One of SwimSwam’s top 5 races to watch, the men’s 100m fly appears to be anyone’s event, with Duncan Scott and Shane Ryan separated by just .09 heading into tomorrow morning’s final.

Scott touched the wall tonight in a time of 53.09, generating the 3rd fastest time of his career. He holds a PB of 52.25, a mark which renders the Stirling athlete as the 6th fastest Brit all-time. Ryan was a fingernail behind tonight in 53.18, setting the pair up for a showdown tomorrow morning.

However, young gun Edward Mildred could very well rain on the parade, as the 17-year-old Northampton athlete just fired off a lifetime best en route to capturing the 3rd seed. Touching in 53.83, the 17-year-old blew away his previous PB, which was represented by the 54.22 he logged only last month at the NASA County Championships.

Versatile Scott was back in the water just a few events later to take on the men’s 200m IM field and he did so in spades, producing a quick 2:00.30. That leads fellow Stirling teammate Mark Szaranek, who touched in 2:02.91. We’ll see if he keeps both events on tomorrow’s agenda. Considering the monster schedule this man typically takes on, however, the double shouldn’t be a problem.

As for the women’s 100m fly prelim, 30-year-old Swansea star Alys Thomas got it done for the top seed in a time of 58.84. Thomas is situated in slot #6 among Great Britain’s top performers all-time in the event, owning a lifetime best of 57.85 from over 2 years ago. The Commonwealth Games 200m fly gold medalist was 58.17 at last year’s British Championships.

A pair of Loughborough swimmers checked-in among the top 4 prelims performers, as Charlotte Atkinson was 59.06 and Harriet West clocked 59.79.

Newly-minted Irish record holder Ellen Walshe is in contention as well, posting a time of 1:00.15. She became her nation’s first-ever female under 1:00 in the event when she hit 59.54 at the Flanders Cup this past January.

Commonwealth Games champion in the 400m IM, Aimee Willmott, produced the fastest 200m IM time of the evening, punching the wall in a mark of 2:12.77. That was enough to edge out Loghborough’s Abbie Wood, the 200m freestyle winner here, who touched in 2:13.53, while the Olympic silver medalist in this 2IM, Siobhan-Marie O’Connor wrapped up the 3rd seed in 2:13.74.

We are told that Willmott has withdrawn from tomorrow night’s final.