Max Litchfield Out Of Commonwealth Games Due To Personal Issues 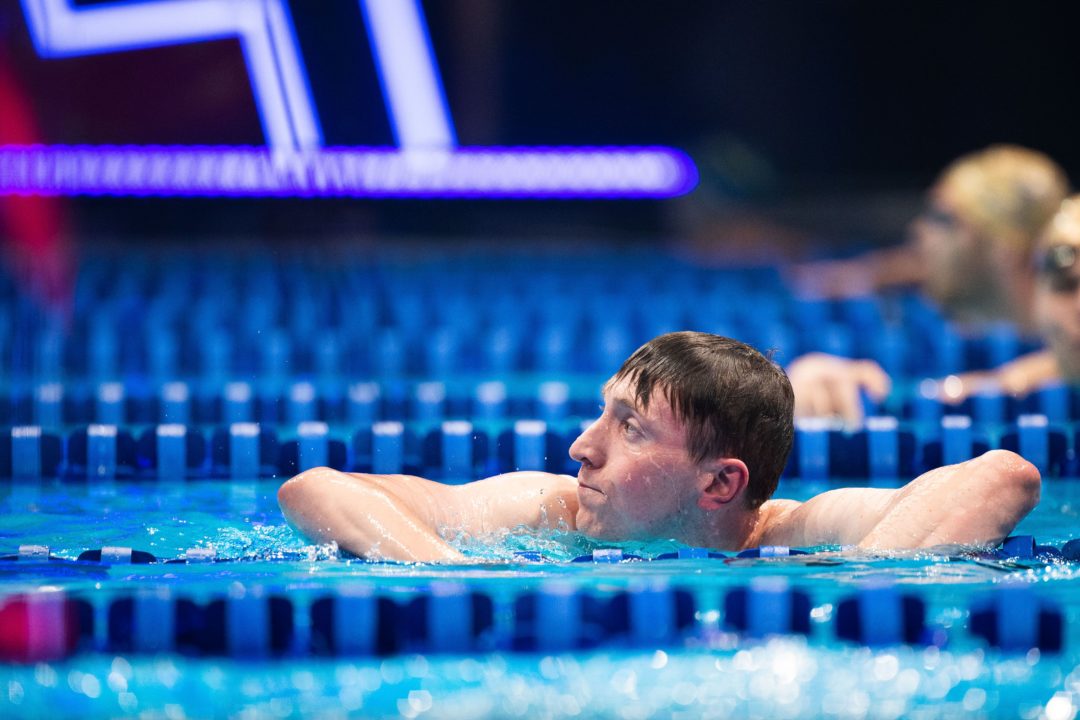 Just when it appeared we would be seeing GBR's Max Litchfield finally back in the water, the British IM ace has revealed he's been sidelined. Archive photo via Mike Lewis/Ola Vista Photography

Just when it appeared we would be seeing two-time Olympic finalist Max Litchfield finally back in the water at an elite international meet, the British IM ace has revealed he’s been sidelined.

27-year-old Litchfield missed this year’s World Championships in Budapest but had his sights set on the Commonwealth Games set for Birmingham at the end of this month. Today on Instagram, the one-time Loughborough man stated that he will no longer be competing at the home-based Games.

“Devastated doesn’t even begin to scratch the surface 💔 This past year I have been struggling with some personal issues that have impacted me in and out the water.

“Throughout the year I have been pushing relentlessly in pursuit of the Commonwealth Games but unfortunately these issues have impacted me more than I could ever have expected.

“It is therefore with great sadness that I have to announce I won’t be competing at this Summer’s Commonwealth Games due to circumstances out of my control. This one really cuts deep after already missing the World Championships in Budapest but I want to say a huge thank you to everyone who has stood by me so far.”

In March of this year, we reported how Olympic finalist Max Litchfield of Great Britain had joined South African Chad Le Clos in his native nation for training.

Litchfield followed this move up with a statement in April conveying, “Unfortunately I am not currently available for selection for the World Championships due to an ongoing personal issue in my life. I am sad not to have the chance to swim but best of luck to the whole team heading out to Budapest.”

We are still awaiting details on the situation related to these competition withdrawals.

Looking in the past, Litchfield missed the 2018 Commonwealth Games due to a shoulder injury, which meant this year was his chance to improve upon his 12th place finish from the 2014 edition of the meet.

Before he announced he would no longer be competing in Birmingham, Litchfield told Yahoo!, “I’m buzzing for the summer to be honest. I’ve not done a Commies since my first senior meet in 2014 – it doesn’t feel like it’s been eight years. I’m so excited to be part of Team England again and just looking forward to getting there and racing again.

“To finally say I can have a home Games is fantastic and hopefully I can put on a show for everyone and so can the rest of the team because we’ve got a pretty awesome team this year. It’s going to be special for sure.” (Yahoo!)

Interesting that today Litchfield indicates he was “denied an opportunity to compete at this year’s Commonwealth Games” rather than miss them for personal issues.

I do know a lot of sportspeople have issues with mental health. That’s not being taken seriously.

No surprise that the swimmer they put in comes from Loughborough, but would of thought they would have put somebody in Max’s events not a totally different event

I’m sure there was someone who would have willing stepped up and taken his place.

Yo i know the Commonwealth games get hyped up every time (especially this time) but as usual its looking like a super overrated meet.

Because of Max Litchfield?

You’d prefer the commonwealth games not to be ‘hyped up’? You think that’s best for swimming do you you donkey

Aren’t you a joy to life.

No one’s forcing you to watch it. Just watch replays of the “competitive” world champs that “definitely” featured all the best swimmers LOL

Who would you replace him with?

There were 4 swimmers (2 F, 2M) who had achieved times closer to the qualifying times set by SE. One female swimmer was closer to the QT than some already on the team (!) and one male swimmer would have been a like-for-like swap for Max in the IM events which would have made sense! Most likely due to medal/ final potential in this case with the 1500 being not as “stacked” for CWG, but nevertheless the others would have deserved the place if they were given the opportunity.

This is not to say the individual doesn’t deserve their place because they of course do, it is just that there are always people who are ‘left out’ by British swimming/ swim england and it seems to be far less likely that they get left out if they are Loughborough and funded. Not a specific case – happens across the board and has done for a long time, such a shame for those who have to miss opportunities.

I think there should be more clarity. Why has this swimmer been chosen over others who seem just as, if not more so, deserving of a place? It seems as if you are a funded swimmer you will always get the nod over someone else who may be equally worthy of selection.

I wish him the best ❤️