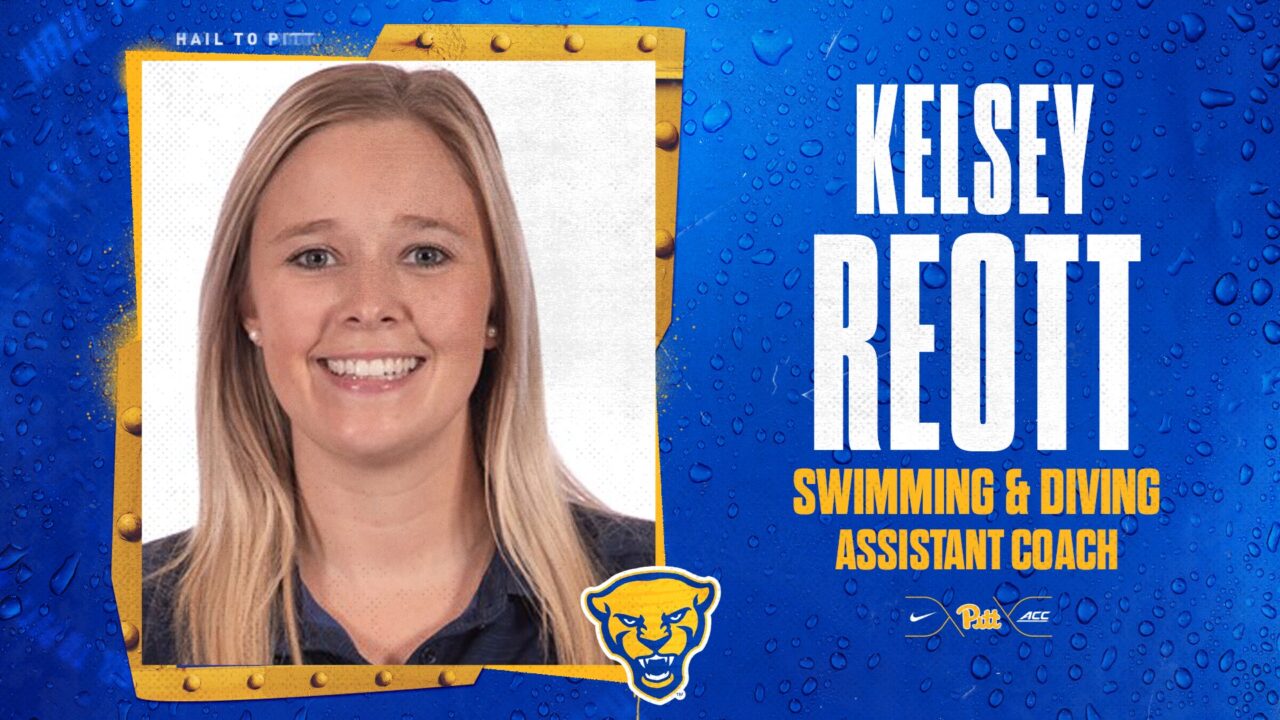 Kelsey Reott comes to Pitt after spending the last three seasons at Bucknell University. Reott grew up in the Pittsburgh area and has a master's degree in mental health counseling. Archive photo via Pitt Athletics

Pitt head coach Chase Kreitler has added a second new coach to his revamped swimming & diving staff with the hiring of Kelsey Reott as a new assistant coach.

With one assistant coaching position to be filled, this hiring means that Pitt swimming & diving will have a paid coaching staff next season that is made up of at least half women.

Reott comes to the program after three seasons as an assistant at Bucknell. Among the things that Kreitler cited in the reason for her hiring is completion of a master’s degree in mental health counseling. With an increased focus on mental health of student-athletes, this is representative of a shift in what skills coaches need as well.

She has another unique skillset as well: she spent time working as a collegiate admissions counselor, which could be a big help as a recruiter and helping prospective student-athletes navigate the admissions process at Pitt.

“I am very excited to have Kelsey Reott join our staff at Pitt,” said Kreitler. “Over the last three years at Bucknell University she has developed great relationships with the student-athletes and helped impact the program’s performance in a significant way. I was impressed in the interview process by Kelsey’s commitment to growing her coaching skills by getting a master’s degree in mental health counseling along with her intentionality to seek out mentorship from some of the best coaches in the sport. In addition, Kelsey’s experiences swimming and coaching in Pennsylvania will be a huge asset to our program in recruiting.”

This is a homecoming of sorts for Reott. She was a two-time Pennsylvania High School State Championship qualifier at Slippery Rock High School about an hour north of Pittsburgh, and swam in college at nearby Westminster College.

Last season, the two Bison programs combined to break 17 records. Reott worked primarily with the butterfly, endurance and non-IM student-athletes, while also executing practices with the sprint medley group and recruiting for both the men’s and women’s programs.

As a student-athlete for Westminster College from 2012 to 2016, Reott excelled in backstroke and IM events. At the PAC Championships, she reached the ‘A’ finals 11 times, placing as high as the runner-up. She was a two-time team captain, four-time All-PAC First Team honoree and was also named to the PAC Academic Honor Roll.

After graduation, she worked as a graduate assistant and admissions counselor at her alma mater.

During her time as a graduate assistant coach with the Titans, Reott was responsible for creating, planning and implementing workouts. She was also heavily involved in recruiting, a strength she built upon as an admissions counselor. Reott helped the women’s team to their first Presidents Athletic Conference Championship in 12 years, while the men’s team placed second in the conference.

She also spent a year as an 8th-grade special education teacher in Virginia and as the head coach of BASS Swim Team, a USA Swimming club.

Kreitler has retained Kevin Arakaki as the lone swimming holdover from the previous staff.

Prior to coming to Pitt, Arakaki spent 3 years as a volunteer assistant at Louisville. There, he worked mostly with the sprint group.

He also spent 3 years as a national group coach for Cardinal Aquatics.

Graduating from Western Illinois in 2015 with a Bachelor’s Degree in Psychology, Arakaki then earned his Master’s Degree in Sport Psychology from California Southern University in 2019.

Arakaki was a four-year letterwinner for the Leathernecks as a backstroke and individual medley specialist. A two-time team captain, he led the team to its highest place at the Summit League Conference Championships. He has the seventh-fastest time in the 100 Back (52.55) in school history.

CONGRATS Kelsey!! You’ll be a tremendous asset to the Pitt Panthers. One of best young coaches coming up in the ranks.

Kelsey is more than ready for this next step up, and I can’t wait to see how she excels in the ACC. Great coach, better person!

Way to go Kelsey!!! It was great to meet you at NC State camps. You are going to do wonderful things at Pitt!!!