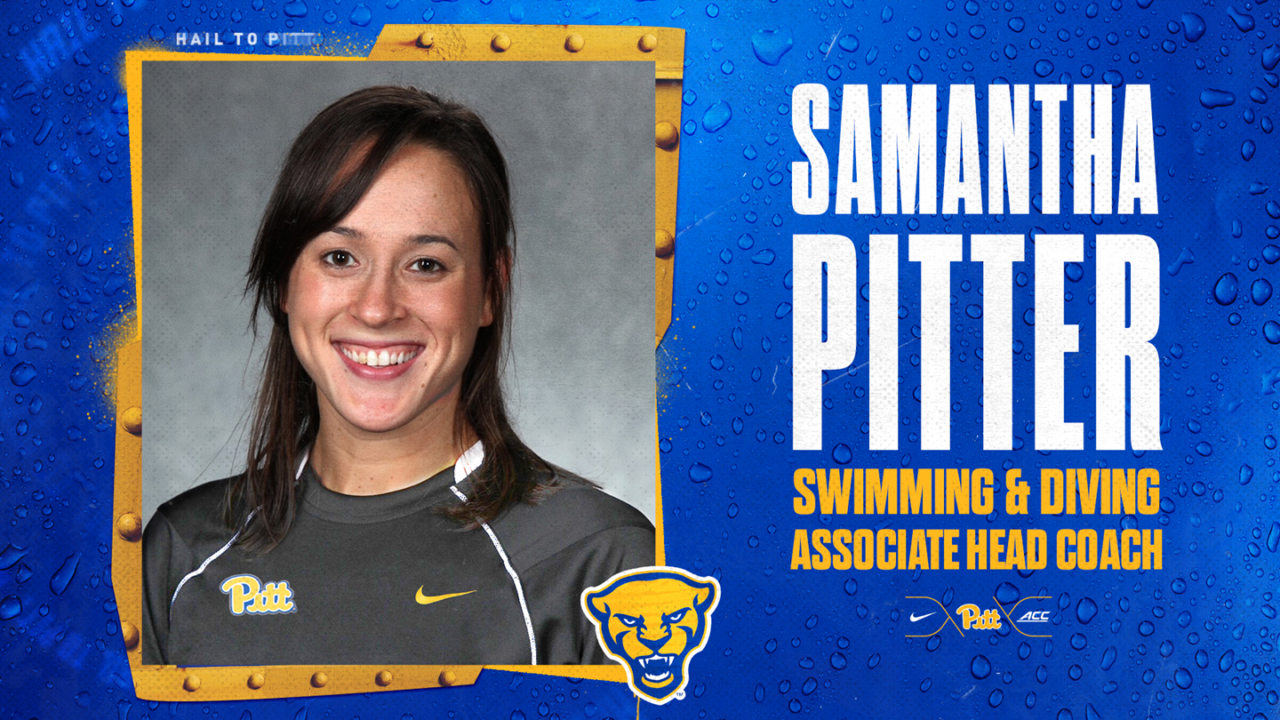 Pitter heads to Pitt after spending eight seasons at Harvard, including four as an associate head coach with the men's team. Current photo via Pitt Athletics

After a nine-year run at Harvard, Samantha Pitter is heading to Pittsburgh next season as head coach Chase Kreitler announced her addition as the Panthers’ new associate head coach on Friday.

Pitter has been coaching with the Crimson dating back to 2013, spending four years as an assistant before being promoted to associate head coach with the men’s team prior to the 2017-18 season.

“I am extremely excited to have Samantha Pitter join our staff at the University of Pittsburgh,” said Kreitler. “She has done a fantastic job of developing positive relationships with the student-athletes at Harvard and MIT, while drawing out superb performances at championship meets.”

Kreitler, a former assistant coach at Cal, was named the new head coach at Pitt in late April, taking over for John Hargis.

“Sam’s experiences as a USA National Team Coach, working directly with an NCAA Champion and helping develop a program to a top 10 finish at the NCAA championships will all be extremely valuable as we build the program together at Pitt,” said Kreitler. “In addition to Sam’s extensive experience in the sport, I know she will be a fantastic mentor to our student-athletes at Pitt.”

A big welcome to our Associate Head Coach, Samantha Pitter!

During her time in Cambridge, Pitter helped lead the Harvard men to back-to-back top 15 finishes at the NCAA Championships and five consecutive Ivy League titles.

She coached Dean Farris to a phenomenal career with the Crimson, as he won a pair of NCAA titles in the 100 freestyle and 100 backstroke in 2019 and set a new American Record in the 200 free.

“I am extremely grateful for this opportunity and would like to thank Chase for the opportunity to serve as an Associate Head Coach at University of Pittsburgh,” said Pitter.

“Pitt is a really special university with great academics and fantastic leaders. I’m so excited to join the staff and help bring to life the vision Chase has for Pitt Swimming & Diving. I look forward to working with the student-athletes to help them reach their athletic, academic and professional goals. H2P!”

In addition to Farris’ individual performances, the Harvard men also placed eighth in the team race at the 2019 NCAA Championships, which marked the highest finish for an Ivy League school in 50 years.

Along with her work in the pool, Pitter oversaw a Crimson team that boasted the top GPA in the nation in each of the past three years.

Prior to Harvard, Pitter spent five seasons at the Massachusetts Institute of Technology (MIT), including four years as an assistant before spending the 2012-13 season as acting head coach. She helped lead both the men’s and women’s programs to three consecutive NEWMAC Championships while guiding the men to four consecutive top-10 finishes at the NCAA Division III Championships.

Pitter earned a double-major Bachelor of Arts in Economics and Communication at Hamilton College in 2007. There, she was a four-time All-America sprinter, school-record holder, team captain and NESCAC All-Academic recipient. She later earned a Masters of Education in Physical Education Specializing in Coaching from Boston University in 2011.

The Pitt men have placed ninth and the women 11th at the last two ACC Championship meets.

Sorry but not a huge hire and Pitt is still the arm Pitt (pun intended) of the ACC.

Pitter is about the biggest hire they could have gotten. No doubt, she transformed both the culture and recruiting at MIT and Harvard who know stand at the top of their respective leagues. Now, with her talent as a coach (& scholarships + ACC amenities) Pitter will have the same profound impact as she has had in her previous tenures. Excited for her and Pitt’s future!!

She is a large reason for moving MIT & Harvard up to the top of their respective leagues. She will be able to do something special here. Go Coach Pitter!

Really awesome to see one of the many awesome great D3 coaches start making their way up the D1 ranks! Can’t wait to see more amazing things from Pitter in the future!

Pitter to Pitt! Looks like a great staff – look for the Panthers to start climbing the ranks in the ACC

Sam is an amazing coach. So happy to see her progress in her career. Made such a difference at Harvard and I know she will be amazing at Pitt!

Sam was awesome at Harvard. Excited to see her shine in a new role

Congrats to Sam! Great hire by Chase! Excited for this new staff! H2P!

Congrats, Sam!! You are an incredible coach, teacher, colleague, and friend!! Great hire by Chase, and great news for Pitt’s student-athletes!!