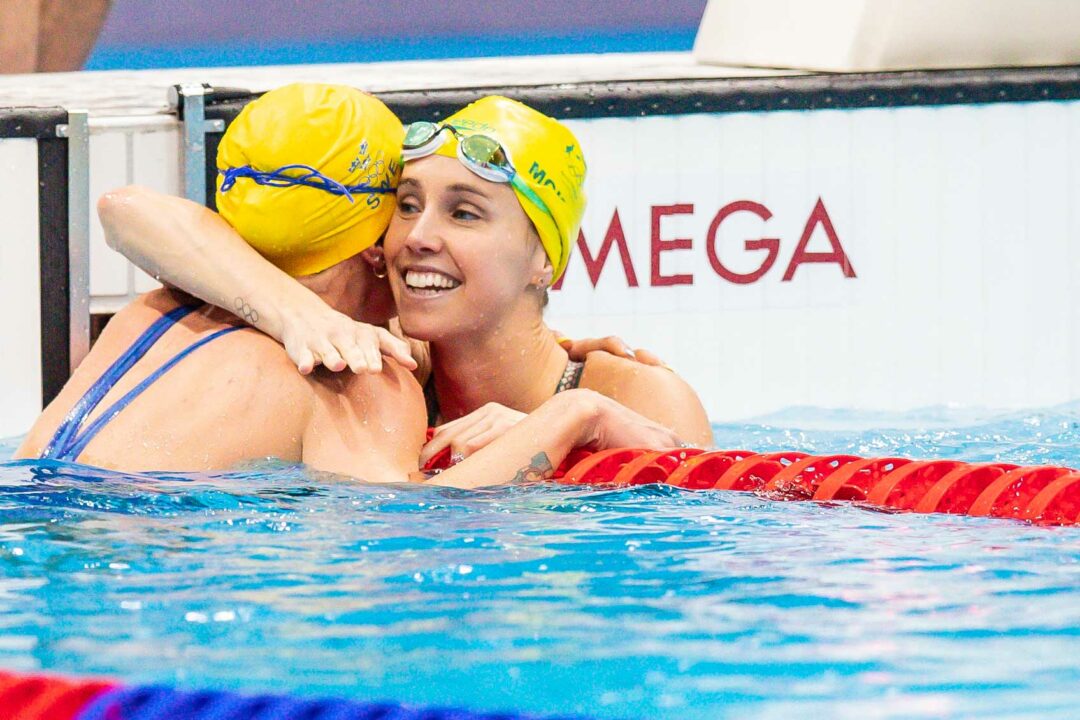 Emma McKeon is among the Australian swimmers who have opted out of the World Championships to gear their focus towards the Commonwealth Games. Archive photo via Jack Spitser/Spitser Photography

Our most recent poll asked SwimSwam readers which non-World Championship meet will be faster this year:

Question: In terms of times required to medal, which competition will be faster in 2022?

It’s not entirely surprising to see that the Commonwealth Games came out on top in a landslide, primarily due to the fact that several big-name Australian swimmers have opted out of the World Championships in favor of the quadrennial event.

That includes the likes of individual 2021 Olympic champions Ariarne Titmus and Emma McKeon, while we’ll also see Kyle Chalmers racing freestyle in Birmingham. Chalmers was initially among the swimmers who completely opted out of Worlds, but ended up changing course after qualifying for the 100 fly at the Australian Trials.

Another individual Olympic gold medalist from Tokyo, South Africa’s Tatjana Schoenmaker, is also rumored to be bypassing the World Championships in favor of Commonwealths, though she was named to the South African roster for Budapest. Her countrymate Matt Sates has also said he’s only doing a slight taper for Worlds before going all-in on the Commonwealth Games.

So it’s abundantly clear that the Commonwealth Games are a big deal for many of the sport’s best, and as a result, it should be a fast meet.

But so will the European Championships.

The last edition of Euros came last year, just two months out from the postponed Olympic Games, and tends to be less big of a deal in the years it’s held shortly before the Games (also the case in 2012, 2016, etc.).

However, this year, many of Europe’s best will likely be targetting the meet—even over Worlds—with it coming in mid-August in Rome. Even if athletes wanted to peak for both meets, there’s a big enough gap between the two that they’ll be able to execute a double-taper.

The last time the events fell during the same year was 2018. Below you can find how the winning times stacked up against each other, and since the original question asked “in terms of times required to medal,” we’ve also included the bronze medal winning data.

Back in 2018, while many of the winning times were close, the European Championships had a faster gold medal time in 18 of 19 events on the men’s side, while the women’s side was much more even. Euros had 10 events that were faster in terms of what it took to reach the top of the podium, while the Commonwealth Games had nine.

If we look at the times required to simply get on the podium and win bronze, it was a similar story. 17 of 19 events were quicker at Euros for the men, while Euros got 12 of 19 for the women.

However, Euros does get a bit of an unfair advantage in the relays, as Great Britain can field their best team there, and then they’re split into England and Scotland at Commonwealths.

Speaking of the Brits, Adam Peaty stands out as someone who was significantly faster at the European Championships in 2018 compared to the Commonwealth Games.

After injuring his foot and pulling out of the World Championships, it’s safe to assume that will be the case again as he’ll have a few extra weeks of training under his belt for Euros.

There’s also little question that the European countries are deeper as a whole in swimming than those that compete at the Commonwealth Games, largely due to the sheer number of nations, but particularly in 2022, the high-end talent is comparable.

Readers clearly believe that things will be different in 2022, and there’s plenty of reason to believe that will be the case.

In addition to the big-name Australians targetting the Commonwealth Games as mentioned above, the European Championships will be missing all of the Russian swimmers, who were responsible for many of those gold and bronze medal times from 2018.

Below, vote in our new A3 Performance Poll, which asks: Will there be any 1:43s this year?

With all the usual caveats (UK in both, missing swimmers this year etc)

Why did Swimswam ignore Canadian girls, who were Olympics champion and medalists, who will swim fast in Commonwealth?

I even noticed commentators often follow the AUS, US and Chinese women, and barely mention the Canadians….

For depth purposes Commonwealth’s also has 3 per country so for most women’s events for sure the 3rd Aussie and then the 3rd from either CAN or GB will help fill the depth to make it comparable to Euro’s.

If someone does do it I would think that Popovici is the one.