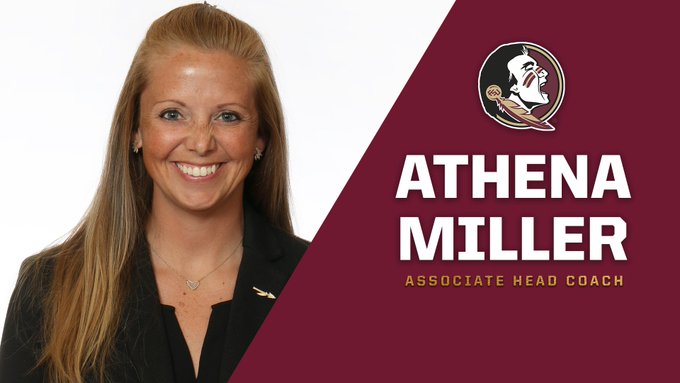 Miller comes to Tallahassee after spending the 2021-22 season as an associate head coach at the University of Pittsburgh. Current photo via Florida State Athletics

The Florida State Seminoles have brought on Athena Miller as the team’s new associate head coach, with head coach Neal Studd making the announcement on Friday.

Miller comes to Tallahassee after spending the 2021-22 season as an associate head coach at the University of Pittsburgh.

“I am honored to be part of the tradition here at FSU,” Miller said. “Everyone has been so welcoming these last few weeks, making this move an easy and exciting one.

“Neal and his staff have done wonderful things and we’re optimistic about the future of the program. We’re eager for the start of the season. Go Noles!”

“We’re really excited to have Athena join our staff,” Studd said. “Her passion is unmatched, and she brings incredible leadership and professionalism to our team. Given her experience, that’s something we can lean on. We’re looking forward to working closely with her.”

During her time at Pitt, Miller coached all of the training groups and helped the team’s athletes record six school records over the course of the season.

The Panthers underwent a head coaching change at the end of last season, with Chase Kreitler taking over for John Hargis.

An open spot at FSU was created when Emma Svensson, who served as an assistant with the Seminoles for four seasons, announced she was leaving coaching “for now” in late March.

Prior to joining Pitt, Miller served as an assistant coach at the United States Air Force Academy for four seasons, coaching three Mountain West Senior Swimmers of the Years along with 17 who earned All-Conference honors.

Prior to Air Force, Miller spent the 2016-17 season at Dartmouth College after she was an assistant at Duke for the 2015-16 season. Her time with the Blue Devils was spent primarily working with the sprint group including guiding Maddie Rusch to a new school record in the women’s 50 free.

Miller, a graduate of the NCAA Women’s Coaches Academy, also spent three years as the head coach at Defiance College and started off her collegiate coaching career as an assistant at Malone University in 2009-10.

After graduating from the University of Mount Union with her Bachelor of Arts in Business Administration in 2008, Miller went on to earn a Master’s degree in psychology with an emphasis in sport in 2012 from Capella University an MBA from Defiance in 2015.

The FSU men placed sixth and the women eighth at the 2022 ACC Championships, both one spot lower than they were in 2020-21.

Would be curious to hear her personal off-the-record thoughts regarding both Hargis’ and Andrade’s tenures at Pitt.