Jiang, Travis and Marciano each triple up on night 2 of NASA Showcase 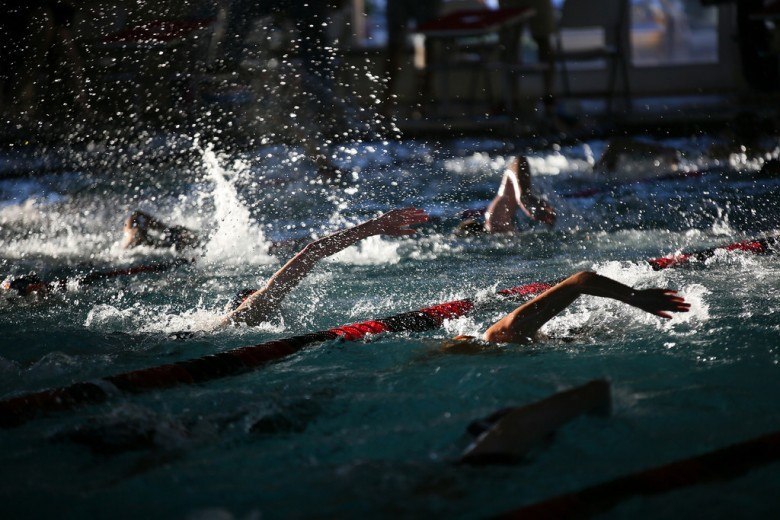 Michael Andrew broke another National Age Group record to celebrate his 15th birthday. Meanwhile Vinny Marciano broke a NAG of his own and Joy Jiang won her 6th, 7th and 8th races in the 10-year-old age group.

10-year-old Joy Jiang, 11-year-old Chase Travis and 12-year-old Vinny Marciano each won three events on the second night of action at the NASA Showcase Classic in Clearwater, Florida. That brings Jiang to 5 wins on the week, and Marciano broke his second National Age Group record of the meet in the 50 back.

Second in that 50 fly was Grace Olsen of Fenton Area, who went on to win the 9 & under 200 free. Her time of 2:11.70 topped second-place Hathaway by almost two seconds.

Vinny Marciano was the other triple winner. The Morris County swimmer first went 2:00.35 to win the 200 IM for 12-year-olds. That was a three-second margin of victory. His NAG record came in his second event, his signature backstroke. Marciano won the 50-yard distance, going 24.32 to break the National Age Group record tie between he and his age group rival Destin Lasco.

The girls 13-14 division had some great battles. In the 200 IM, Town Wrecker’s Kristen Romano went 2:03.63 to overcome top-seeded Olivia Paoletti. Paoletti was 2:04.28 in second as the top two really checked out from the field.

Romano took second in the 50 back, just three tenths off of winner Paige Assad of the Virginia Gators. Assad went 26.08 to Romano’s 26.35.

Cuyahoga Falls’ Giovanna Cappabianca took the age 12 200 IM in a touchout. Her 2:05.58 got in just ahead of last night’s double-winner Katie Mack. Mack, who swims for Nation’s Capital, went 2:05.73 for a tight second.

In the 50 back, 12-year-old Olivia Bray took her heat for the Virginia Gators at 26.83. Meanwhile Southwest’s Gabriela Pierobon Mays went 27.61 to win the only 11-year-old heat that didn’t go to Chase Travis.

The 12-year-olds’ 500 free went to The Fish’s Madelyn Donohoe. She dropped four seconds from her seed to win the timed finals event at 4:55.83, the only swimmer under five minutes.

Christopher Hardt picked up his third win in the 11-year-old division, going 2:07.18 to win the 200 fly over Leo Goldblatt, himself a double-title-winner at this meet already. Goldblatt was 2:07.66 for The Fish.

It was a great night for the Virginia Gators, and they closed things out with a victory in the girls 10 & under 400 medley relay. The team of 8-year-old Ava Muzzy, Caroline Summerlin, Alexa Scott and Claire Moddy went 4:42.95 to touch out Delaware Swim Team by a tenth.

The Fish won the boys 10 & under relay by ten seconds. J.T. Ewing, Johnny Bradshaw, Nicholas Arndy and Liam Redman ran away with things, going 4:33.54 for the big win.

The 11-12 girls 400 medley relay went to the Academy Bullets. Michaela Herwig, Tiffany Matulis, Lindsey Merk and Emily Hennessy combined to go 4:03.28, winning by about a second and a half over St. Charles. St. Charles triumphed in the boys relay, though going 3:59.66 to beat the field by five seconds. That was the team of Nicholas Vance, Matthew Nagler, Nathaniel Baxter and Henry Bliss.

In the oldest age group, Delaware Swim Team’s girls took the race. Brooke Travis, Rabea Pfaff, Olivia Paoletti and Serena Derderian went 3:54.64 as a unit in that 400 medley, including a 51.5 from Derderian on the freestyle leg. Meanwhile on the boys side, Quest Swimming took the title in 3:39.35. Ethan Beach, Clark Beach, Michael Strycker and Brennen Doss made up that team.

The meet will pick back up tomorrow morning and continue through Saturday night, meaning we’ve officially hit the halfway marker at the conclusion of night two.

Congrats to Lance Godard and his dominant 200 Free – 10th fastest All Time for 10 & Unders. Just 0.18 seconds behind Michael Andrew’s best at 10 years of age.

As for Michael Andrews at Showcase. I was very impressed in how much fun he looked like he was having as he socialized with his peers and he was very gracious during the awards ceremony. His is a great swimmer and while he may miss swimming on high school and college relays, I’m sure if he earns the opportunity, he will excel in the future on relays representing Usa swimming.

Thanks so much for recognizing Joy Jiang. Nasa is a fun and fast meet. Btw in the title you mention Marciano 2x. Did u mean to mention Joy who was the other swimmer who tripled last night?

Good catch – meant to recognize Joy Jiang there. It’s been updated, thanks!

Great swim by 12-year-old Madelyn Donohue.
With her 4.55.83 in the 500 free, she’s now the 11th performer of all-time in the 11/12 age category. Just ahead of some famous names like Katie Ledecky or Elizabeth Beisel.

What’s going on with Mr Andrew?
No NAG record in the 200 fly?
More seriously, it shows that his 1.45 from a few weeks ago will be one of his hardest records to break in the future.
But he redeemed himself later in swimming a crazy fast 50 back.
Talking about his backstroke, when I watched his 200 yesterday, I remarked a much better technique. I didn’t like his backstroke before but it has improved a lot in the last few weeks. It looked much smoother than before. And at the end it goes much faster. Great job.

Impressive Vinny Marciano in the 50 back. Second NAG record of the week for him.
But he still has some chances to break a few others.
He has an interesting triple today with the 100 back/100 fly/100 free.
He wants probably take back the 100 back NAG record. 52.32 by Destin Lasco.
The 100 fly record looks too hard. Antique record! 🙂
51.85 by Chas Morton in 1984!
And the 100 free record is owned by the famous Michael Andrew in 47.95.
It will be his 3rd swim of the evening so it will be tough but why not?

@swimswamnews: Michael Andrew swan a 21.87 50 back. Would have beat lead off for All-American relays last year at Flor, Mich, UNLV, Kentucky. Tied Tenn.