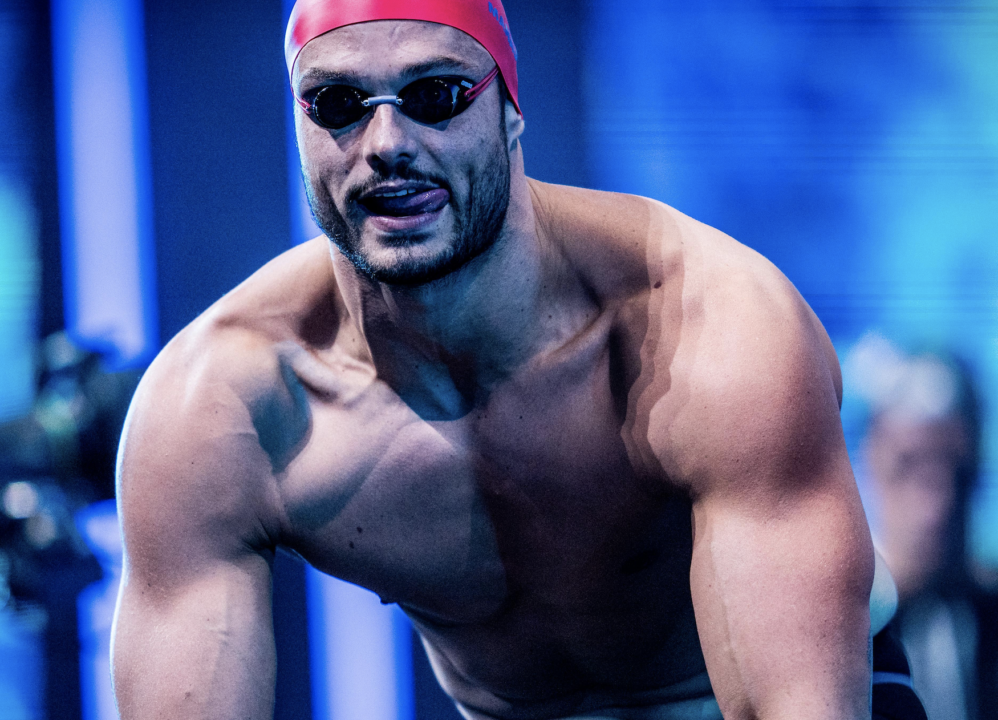 30-year-old Florent Manaudou is smiling, as he just clocked an Olympic qualifying time in the men's 50m freestyle at the French Elite Championships. Archive photo via Mine Kasapoglu for ISL

The 2020 French Elite Championships continued tonight in Saint-Raphaël with the likes of Florent Manaudou, Charlotte Bonnet and Melanie Henique all taking to the pool.

For Henique’s part, we reported on how the 27-year-old ripped a new French national record en route to taking the women’s 50m fly title. Roaring to the wall in a time of 25.24, Henique beat the field, which included the former national record holder Marie Wattel, by over half a second. You can read more about Henique’s impressive outing here.

30-year-old Manaudou took on the men’s 50m freestyle and won the event handily in a time of 21.73. That shaved .16 off of his morning effort of 21.89, with his night result dipping under the French Swimming Federation (FFN) Olympic qualifying standard of 21.80. As such, the man right looks primed to try and take another 50m freestyle medal at next year’s Olympic Games. He was the champion in 2012 in London.

Running right behind him tonight in the only other sub-22 second time of the field was Clement Mignon who hit a time of 21.91. That shaves .02 off of his previous PB and marks just the 2nd time he’s ever been under the 22-point barrier in the event. We’ll keep an eye on the 27-year-old as the Olympic qualification window moves on.

Bonnet got it done for gold tonight in the women’s 200m free, producing a solid performance of 1:56.65. Splitting 56.16/1:00.49, Bonnet beat the field by nearly a second, with the next closest finisher being that of visiting Russian Anna Egorova.

Going back to Bonnet, her time tonight fell painstakingly just .02 outside of the FFN-mandated qualification time of 1:56.63 needed for Tokyo. However, Bonnet owns a lifetime best of 1:54.95 from when she took the 2018 European Championships title and has been under the FFN’s Olympic QT more than a dozen times, so it’s likely she’ll make it happen in the near future.

Another close call transpired in the men’s 100m back, with 19-year-old Mewen Tomac stopping the clock in a time of 53.46. Opening in 25.72 and bringing it home in 27.74, Tomac’s time tonight checks in as the 2nd fastest of his career. He owns a lifetime best of 53.29 from this past August.

However, his 53.46 fell short of the FFN’s Olympic QT of 53.34 by just .12, rendering him still in the pursuit. Along with him is Yohann Ndoye Brouard, who was also within striking distance, logging 53.95 for runner-up tonight.

ASU commit Leon Marchand made some noise already here in the prelims of the 200m fly, hitting a new French Age Record for 18-year-olds with his morning swim of 1:56.73.

Flash forward to tonight’s final and the future Sun Devils managed to drop another tenth to claim gold in a time of 1:56.63. Marchand was the only racer to get under 2:00, with visiting British open water ace Hector Pardoe sliding into second place in 2:00.90. Marchand took bronze in the 100m fly already on night 1 here.

Did Marchand make the French olympic standard in 2fly?

Is he planning to swim the 100m as well?? Him trying to train and qualify for the individual event in 2016 undoubtedly cost him the gold in the 50–he was 3 tenths lower than he went in 2015.

I thought he still went 21.2 in semis? While you may be right, I think his speed was there but mentally he said in a podcast there was a lot of pressure since he was the favorite.

Without that turn at the 25m he faded a bit.

He’s been swimming in meters his entire life… Do you think the ISL was the first time he had experience with short course? He’s had that transition from SCM to LCM plenty of times

your attempt at sarcasm faded hard

So at the moment Manaudou has basically punched his ticket to Tokyo.

I believe Hector Pardoe is now living and training in Montpellier under Lucas, so not a visitor per se. That was a three second PB in the 200 fly. Pardoe is primarily a distance freestyle and OW swimmer, so he may be another Lucas ‘project’ to keep an eye on in the coming years.