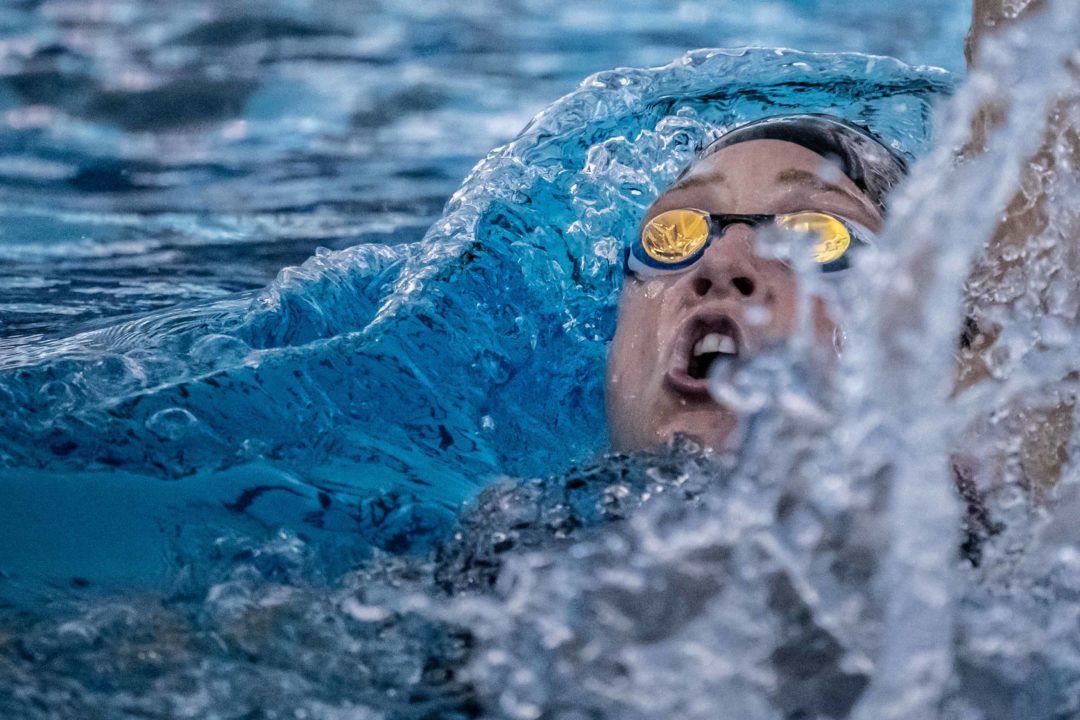 Cox shoots past American Melanie Margalis to the #1 time in the world this year.  Archive photo via Mike Lewis/Ola Vista Photography

Cox shoots past American Melanie Margalis to the #1 time in the world this year. Tonight, she beat Texas sophomore Evie Pfeifer (2:15.78).

Longhorn Aquatics’ Clark Smith was well under four minutes in the men’s 400 free, winning it in 3:53.17. That’s a solid time for Smith, less than a second off of what he went at this meet last year. The women’s race went to Santa Clara Swim Club’s Nicole Oliva (4:17.26). The 17-year-old Oliva, who represents the Philippines internationally, was nine-tenths off of her lifetime best of 4:16.29 from the 2018 Pan Pacs.

Texas senior John Shebat clocked the win in the 200 IM, going 2:02.81 for his best in-season long course 200 IM ever. Denver Hilltoppers’ William Goodwin was 2:05.43 for 2nd, a lifetime best for the Mizzou commit.

At my very best, if I swam shaved and tapered on Jan 1st, I think I could be the world best through about Jan 2nd. You?

Must have been drinking a lot of that good tab water

It’s quite sad that an athlete can be wrongfully accused of knowingly taking a microscopic amount of a banned substance that cannot even be bought in her country, have no explanation as to where it came from so she offers whatever she can in a plea to continue her otherwise immaculate career, then finds an absolutely legitimate reason for the contamination in a substance the same wrongful accusers told her she could take (so she didn’t retest in the intitial accusation), and miserable people like this still call her a cheat. Shame.

Because so many prominent athletes have lied about taking illegal substances, we’re conditioned to not believe anyone anymore.

Unfortunately with their abilities to test to such micro traces these contamination cases are going to become more frequent. Cox’s amount was a 10th of a billionth or .0000000001 of a gram. A level of .1 nanogram is almost unfathomable

Sounds a lot like the Hardy case. She repeated the narrative that she ‘proved’ the tainted supplement excuse but I still haven’t seen any public confirmation of that anywhere. Didn’t SS report a few weeks back that the manufacturer had not discovered any tainted products?

That is not what SS said. A WADA certified lab reported that they found it in both an opened and a sealed bottle from the same lot number. This was not a powder or a capsule. It was a pressed tablet with 4 ng in each tablet. If you are going to try to smear someone at least get your facts straight.